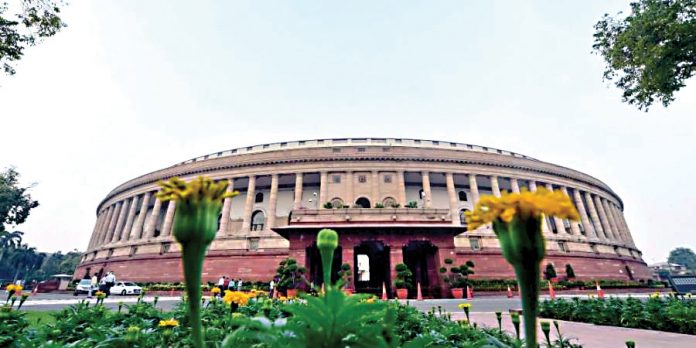 One hundred years ago, when the nation was still in the making and Independence 26 years away, Britain’s Duke of Connaught laid the foundation stone of Parliament House and said it would stand “as the symbol of India’s rebirth to yet higher destinies”.

On Friday, a century from that February 12, 1921 day, as parliamentarians from various parties sat in the Lok Sabha and the Rajya Sabha for the budget session and work continued on a new parliament building close by, the milestone was a blip in history unnoticed by many.

The building, with a diameter of 560 feet and circumference of one-third of a mile, was designed by Sir Herbert Baker, who along with Sir Edwin Lutyens was chosen to design the new imperial capital in Delhi on a site in the Raisina Hill area.

Placing the first building block of what would become the imposing circular, colonnaded structure that is the heartbeat of India’s parliamentary democracy, Prince Arthur, the Duke of Connaught and Strathearn, had recalled the grandeur of the Acropolis in Athens.

He was an uncle of King George V, then reigning monarch of the British Empire, and laid a huge block of red sandstone bearing inscriptions in Hindi, English, and Urdu in that order. It carries his name and the historic date in Roman numbers – ‘XII February A.D. MCMXXI’.

“I need only recall the Acropolis of Athens, the Capital of Rome, and the great cities of the East famous in past ages for their splendour and culture. India herself is rich in such precious legacies. From the granite pillars on which the Apostle Emperor Asoka engraved his imperishable edicts, onwards through the chequered centuries, down to the splendid palaces of the Moghal Emperors, every age has left behind it some monument commensurate with its own achievements,” the Duke of Connaught said.

Records show the grand ceremony took place with then Viceroy Lord Chelmsford – a recreational club named after him still stands a stone’s throw away – and a large number of ruling chiefs from princely states and other dignitaries in attendance.

A 1921 publication of the Superintendent Government Printing, Calcutta, on the Duke of Connaught’s visit has full texts of the speeches made on the occasion.

At the foundation laying ceremony, he said: “These buildings will not only be the home of new representative institutions which mark a vast stride forward in the political development of India and of the British Empire, but will, I trust, stand for future generations as the symbol of India’s rebirth to yet higher destinies.”

All “great rulers, every great people, every great civilisation have left their own record in stone and bronze and marble, as well as in the pages of history”, he said.

The Duke of Connaught, after whom Delhi’s first and biggest shopping plaza is named, extolled the value of architecture and underlined its role in politics and nation-building.

According to old archival images, an elegant pavilion was constructed on the site during the foundation stone ceremony. Later, a circular railway track was temporarily laid around the structure during construction to transport raw material.The architectural masterpiece, which was originally called Council House, was inaugurated six years later in 1927, 20 years before India attained its freedom on August 15, 1947, by then Viceroy Lord Irwin.

According to the plan, the building was to be constructed to house the imperial legislative chambers – the central legislative assembly (which took the form of the Lok Sabha), the Council of State (became Rajya Sabha) and the Chambers of Princes (now used for other purposes) – along with a Central Hall to house a library and a place to hold joint sessions. All within the aesthetic round structure.

The sprawling edifice covering an area of nearly six acres and its creamy sandstone colonnade of 144 pillars on the first floor is one of the most distinctive parliament buildings anywhere in the world.

In 1929, Bhagat Singh hurled a bomb into its chambers. At the Central Hall is where Jawaharlal Nehru welcomed India’s ‘’tryst with destiny’’ as India became independent on August 15, 1947, and where the Constitution took shape.

Over the decades, as India evolved into the nation it is today, Parliament House has been witness to many a moment in history – from cerebral debates to high-decibel, raucous discussions and the passing of legislations, some landmark and others controversial.

In 1911, King George held a grand Durbar in Delhi where he also announced the shifting of the imperial capital from Calcutta to Delhi.

Lutyens and Baker gave shape to the new imperial capital, with the Viceroy’s House (now Rashtrapati Bhavan) and the North Block and South Block as the centrepiece of ‘New Delhi’, as the city was officially named in 1926.

On February 12, 1931, Lord Irwin also dedicated the All India War Memorial to the nation in a solemn ceremony as part of the official inauguration ceremony of ‘New Delhi’ which started on February 10 and lasted about a week.

“Till the Council House or Parliament House as we know it today, was built, the legislature was housed in the iconic Old Secretariat building of the government, which today is home to the Delhi Assembly,” says Swapna Liddle, Delhi-based historian and author of ‘Connaught Place and the Making of New Delhi’.

On February 8, 1921, the Duke of Connaught inaugurated the Chamber of Princes, and the next day opened the Legislative Assembly and the Council of State in an impressive ceremony at the Old Secretariat, according to the Superintendent Government Printing.

In December this year, Prime Minister Narendra Modi laid the foundation stone of a new Parliament House to be built close to the old one at a mammoth cost, drawing criticism from several heritage lovers and architecture experts who fear the old heritage structure might get overshadowed.

The new building is expected to be completed in time for the 75th anniversary of India’s
Independence Day.