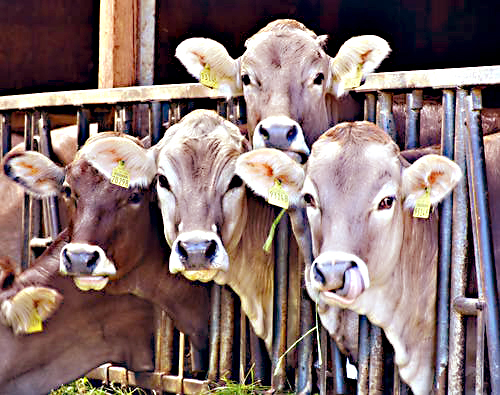 God/universe/nature has a strict rule: all the suffering caused by man will have to be borne by man. Is anyone on this planet happy? Rich or poor? Hindus call it the law of Karma. Other religions simply dismiss it as coincidence.

The root of all suffering is the way we eat and what we want in terms of possessions: our clothing, cars, houses, money. Both these are destroying the earth. But it starts with what we eat.

See how the cycle of suffering is constructed. We grow animals to eat them. It is those animals that are creating the climate change that is so vicious that, all over the world, countries are falling to bits : climate change has created months of unrelenting forest fires in Australia, the locust invasions in Africa and Asia because the rains increased in length and severity – to just give you two examples.

But now a new factor has been seen: it was always there but it has been researched and revealed only now. We keep cattle really badly, closed sheds, no exercise, standing in their own dung, injected with hormones to increase their milk and meat, their children killed in front of them, their permanent pregnancies, bad food… we have left no stone unturned to be as wicked as possible to cows and buffaloes. As a result they are sick. In India most of them have mastitis, cancer, tuberculosis, foot and mouth disease, and many other diseases. Whoever drinks milk, or eats their meat, is going to get these diseases- that is a certainty.

But what is this doing to the world in general? There are three gases mainly responsible for the heating of the atmosphere and climate change. Carbon dioxide, methane and nitrous oxide. Of these, methane is the most deadly – not carbon dioxide . It is 24 times stronger than carbon dioxide in warming the world.

And it comes from just three sources: coal, rice, and animals grown for meat. India, China and Brazil – methane is our gift to the ending of the world.

One cow emits 600 litres of methane every day. Pigs, goats, chicken, and every other grass eater grown for meat, do the same in varying amounts. This is when they are healthy.

But most of the livestock in the world is sick – from sick and suffering chickens to cows and buffaloes, it is rare to find a single healthy animal.

Now, researchers have found that sick livestock produce even more methane. And their study shows a vicious circle: methane warms the atmosphere locally and globally and the hotter temperature increases the spread of pathogens and the numbers of unwell livestock around the world. In short: sick cows are making the planet sick and a sick planet is making the cows even sicker.

There is only one way to deal with this: reduce the livestock substantially. Stop eating and exporting meat if you want any other crop to survive global warming. Stop growing and keeping cows and buffaloes if you want to survive.

You can always argue that humans will find a better way to keep livestock. But industrialisation of milk and meat does not allow for that. The Animal Husbandry Ministry has no hospitals, no medicines, no veterinary help for sick animals anywhere in India. But it has a huge amount of money for artificial insemination of cows/buffaloes. Therefore there is no plan to alleviate the sickness of our meat/milk producing animals – only to keep producing them in larger amounts. A cow that is inseminated once a year to produce a baby will get weaker and weaker, ill fed, never looked after, tied the entire day, milked with dirty hands, fed a little rubbish and overworked. This animal is never going to be well. When you get sick, your stomach starts misbehaving and you produce masses of gas; this is what the cow does. Either the government finds a better way to protect their health, or we stop growing cattle.

Writing in the journal Trends in Ecology and Evolution, the researchers’ Ezenwa, et al ‘Infectious Diseases, Livestock, and Climate: A Vicious Cycle?’ focused on common, widespread ailments such as gastrointestinal worms, and bacterial infections like mastitis—that are also known to increase methane emissions. Gastrointestinal worm infections disrupt the regular makeup of a cow’s gut, resulting in the production of more methane.

Current estimates suggest that livestock populations are going to increase by 2.7 per cent annually. This growing population will already cause a 20 per cent leap in methane emissions a decade from now. But when the researchers factored the effects of a common parasitic gastrointestinal worm into this equation, that figure jumped steeply to 82 per cent — a fourfold increase in expected emissions. And that is just one disease. Each disease will increase the methane.

Animal welfare is a key player in agricultural emissions, and it deserves immediate attention. Rising temperatures are increasing the prevalence of many diseases that plague livestock, because the warmth accelerates their breeding. Antibiotic resistance in some bacteria—like those that cause mastitis—is also growing under hotter conditions.

Are there any new ways to treat and reduce disease, to lessen the load on animals and the planet, and to free livestock from this destructive climate-and-disease loop? No. There is only one way: stop eating meat and dairy.