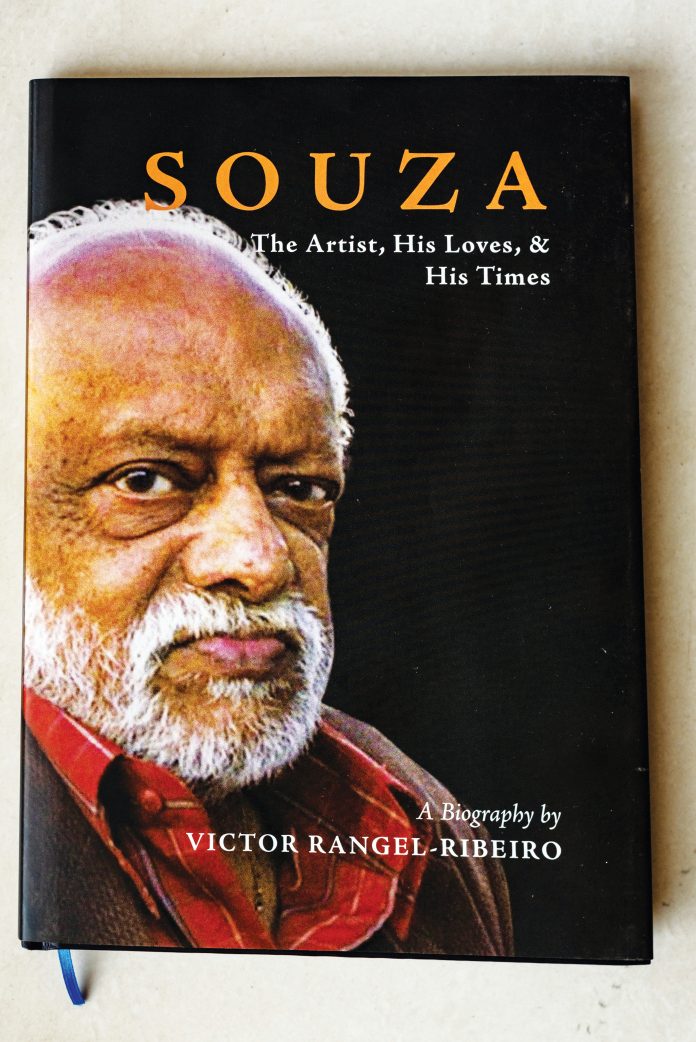 ‘Souza: The Artist, His loves and His Times’ by Victor Rangel-Ribeiro chronicles the life and times of the late Goan artist F N Souza and offers new insights, while also dwelling on the friendship between the writer and artist. Here’s an excerpt from the book

On a February morning in 1948, a jubilant Nadir Boman-Behram, wealthy Parsi entrepreneur and art collector, strode past my desk at Eve’s Weekly with an even bouncier gait than usual. “Ribeiro,” he called out, as he headed for his office overlooking Bombay’s busy Hornby Road, now called Dadabhai Naoroji Road, “Come quick! I’ve got something special to show you.”

He had a flat brown paper package under his arm. What could it be? By the time I had caught up with him he was already tearing at the wrapping.

The object he wanted me to look at and admire took my breath away. It was a portrait of a young Goan woman, burnt a rich chocolate brown by the sun; she was wearing a deep red, low-cut blouse with a gold cross between her breasts. The portrait was sensual, profoundly so, but more than this, it was powerful; her eyes were hypnotic. Aside from portraits by Rembrandt, I had never seen anything quite like it, and I told him so. “Stunning! Who’s the artist?”

It may have seemed like a foolish question, because the signature was staring me in the face, but Boman-Behram knew what I meant: the name by itself was new to me. “A young chap. A Goan like you,” Boman-Behram said. “Known as Newton,” he added, when I looked puzzled. The name meant nothing. “Francis Newton Souza?”

I shook my head. Though there were probably thousands of Souzas in Bombay and Goa, none of the ones I knew painted seriously.

“Well, I’ll hang it up on the wall behind me,” Boman-Behram said. “I’m happy I found it, before someone else got their hands on it.”

I was happy too. So were the office staff, who hearing our excitement, had crowded in to see what was causing it. A few days later, however, when we were planning the following week’s issue, Boman-Behram swivelled around in his chair and glared at the painting. “I can’t focus,” he growled. “I can’t stand having that painting hanging up there; when I’m sitting at this desk, I can feel her eyes boring into the back of my neck. I’m taking it home.” And he did. But so powerful was the painting that though the incident I describe happened seventy years ago, the image that hung on that wall is still imprinted on my mind.

In the Bombay of those days art exhibitions came and went without causing much of a ripple, but the one that opened a year later, in July of 1949, drew a lot of attention. By then I had joined the National Standard (now the Indian Express), where the art critic Jag Mohan and the assistant editor Trevor Drieberg, an art aficionado, became my professional colleagues and close friends. Drieberg, an import from Sri Lanka, was a frail, pale, slow-moving but vital presence at the office much admired for the sharpness of his intellect and feared for the sharpness of his wit. At the Standard I was running a shift at the news desk besides being the music critic, while also trying to sort out an emotional crisis in my own life; however, it did not take much arm twisting for the two of them to persuade me to visit the newly opened art show.

Ara and Raza, two of the artists whose works were on display, came up to greet us. Both were about my age, Ara perhaps a bit older; both rather soft-spoken, Sayed Haider Raza very thin and shy and timid, nervous in his gestures, Krishnaji Howlaji Ara short, stocky, and quiet but self-assured, with an air of impenetrable dignity. Souza was not around, but his bold paintings stood out among the exhibits. I had a concert to cover that evening, so though they urged me to wait for Souza, I left fairly quickly.

A couple of weeks later I asked Jag Mohan if he could take me with him the next time he and Souza got together. “That may take a couple of years,” he said. “I thought you knew? He’s probably in London by now. He sailed off to England to try his luck there.” I was disappointed, but he then put me in touch with Raza and Ara. Raza was painting very impressionistic watercolours at the time, and they appealed to me more than Ara’s still lifes and placid nudes, but both were eager to talk, and we became friends. Raza left for Paris in 1950, but the friendship with Ara grew even though I was not an art buyer but a book collector; it continued until my wife Lea and I and our baby daughter Eva left for New York in 1956.

Late one afternoon in 1967 I got a phone call from a favourite young cousin of mine, Dr Luis Miranda, who had also migrated to the United States. Luis wanted us to drive into town and go with him to visit a “fantastic Goan” he had just met.

So we got into our Chevy Corvair and went to meet the mystery man. Luis led us to an apartment building on West 67th Street and up several flights of stairs. The person who answered the doorbell, however, was not a Goan male, but a blond and blue-eyed young woman. “Hello, Luis,” the young woman said, flashing a very welcoming smile. To us, she said, “I’m Barbara. Francis had an errand to run, but he’ll be back in a minute. Come in and make yourselves comfortable while I make us
some tea.”

The sitting room was comfortably furnished but even before we looked for a place to sit our attention was drawn to the paintings hanging on every wall; others were stacked in a heap by a corner. They reminded me of some I had seen years earlier at exhibitions in Bombay; but the brushwork was bolder, the portraits more sombre; some were sinister, even oddly distorted. I did not have to ask who the artist was; his bold, brash signature was boldly placed where everyone could see it: SOUZA. At last! Now I could hardly wait for the door to swing open and let Souza in.

What struck me when Souza did arrive is how little he matched the mental picture I had conjured up of him from seeing the paintings and drawings on display. I had imagined he would be a hearty and confident man, perhaps in his early forties like me; I had got the age about right, but here was someone who, despite the power on display in his art, was so soft-spoken as to seem still somewhat unsure of himself in company. It took only a few minutes of conversation, however, for me to realize that, despite this apparent diffidence, I was face to face with someone of high intellect and wide cultural background. We both found we had interests in common: a deep love for classical music and a passion for literature. Souza leaned forward when Luis told him that Lea had studied piano at Juilliard and I had reviewed classical concerts for the New York Times and now owned a specialized classical music antiquariat in Manhattan, but I could see the disappointment in his face when I told him I carried only printed music, no recordings. Still, he seemed to be as curious about us as we were about him and Barbara.

It turned out that he and I had had some astonishing parallels in our lives: in the mid-1920s we had lived as little children in houses almost back to back to each other in Saligao; had as teenagers in Bombay attended Jesuit schools barely two miles apart; and for four years I had pursued a degree at a college, and he a diploma at an art school, almost within hailing distance of each other. Yet, close physical proximity had not brought us together; it had taken two separate journeys adding up to several thousand miles apiece to bring that about.

So Luis and Lea and I became friends with Barbara and Francis, and some three years later were joined by yet another Goan—the young, effervescent, argumentative and highly opinionated José Pereira, who had been a close friend of mine in Bombay, arrived in New York to lecture on theology at Fordham University. We met, often while Barbara was at work, and had animated discussions, with Francis, Luis, Lea and me talking about art, literature, and music, but Francis and José invariably butting heads about religion and Indian philosophy. When that happened, we three others might as well have been sequestered on the moon; Sanskrit quotations flew thick and fast; to interrupt their debate would have been as difficult as trying to separate two fighting bulls who had locked horns in a prearranged bullfight. But despite the sometimes heated arguments, there were never any ill feelings; also, we did not meet very often. New York does that to people, especially if they live in disparate parts of the city; the struggle to survive and the pursuit of divergent careers both get in the way.

Fortunately, Francis was a prolific letter writer, and in between meetings we corresponded. The last letter I have from him was written in 2000, while he was on a trip to India. But the most memorable one had arrived in October 1971, a couple of days or so after his son Patrick was born. It consisted of a pen-and-ink drawing of the actual birth, done in graphic detail: Souza had included himself standing off to one side, wearing a hospital gown and sporting his trademark pockmarked face; the mother was in the stirrups, the baby still had the umbilical cord attached. On the front Souza had jotted down the sex (“It’s a boy!”) the date and time of birth (October 27, 1971, 3.35 p.m.), and the weight of the newborn (7 lbs 15 oz.); on the reverse he had scribbled a personal message. The sketch carried his usual one-word signature, but the note was signed “Love, The Souzas.”