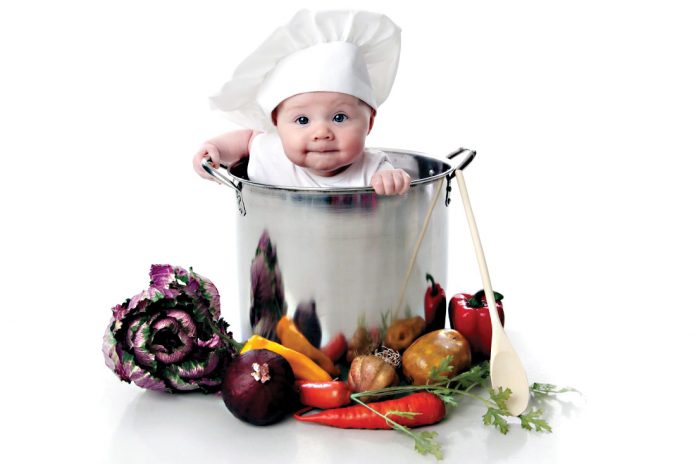 When I became a father, I had a ton of unrealised dreams that I thought I could get my new-born son to fulfil. As I cradled the tiny body in my arms and gazed into his pure and trusting eyes, I was convinced that my wife and I had spawned the greatest of humans. I was convinced that I was holding the future of humankind in my arms. My son would have the brains of Einstein, the creativity of Gates, the tenacity of Jobs, the business acumen of Bezos and the empathy of Mother Theresa.

I had planned his life out carefully. He would be solving calculus by the time he was five; theoretical astrophysics by nine and would be able to discuss the nuances of Homer and Euclid at fourteen.

He would be able to strip and reassemble a car or a battle tank and for sure he would learn how to cook! Since the last skill was the only one that I could pass on with a modicum of dignity, I decided to dive into it with full force.

I began charting out lesson plans and his cooking course. I got a master ironsmith to hand forge a knife small enough to fit into his tiny grasp. This was to be the breakthrough that I was looking for. The creation of the world’s first super-chef!

He was going to be totally badass and I would be around to see it all!

And I didn’t want my son to start with the basics. I wanted him to floor the world with his amazing acumen and knowledge of even the most complicated of ingredients.

I wanted my son to be able to impress the world with his comprehension of some of the most unusual vegetables the world has to offer.

In his formative years itself, he should have been able to shun the regularly available and rather plebeian broccoli and instead opt for the long stalked and smaller bulbed Apollo broccoli. If that isn’t exciting enough, then he could pick the complicated, natural, spiral-filled and intricately beautiful romanesco!

Or choose to make winter parathas with black radish instead of the regular bright white option!

Or he could have travelled to the northern mountainous regionsof India where the weather is cooler and pick up some rolled up fiddlehead ferns to turn into a stir-fry. If cooking with unique vegetables is going to get him some attention, then you can imagine the number of eyeballs that serving ferns will achieve.

Regular carrots are so easily available and due to their overexposure, the maximum black carrots can achieve is a meh! What would really have been cool would be to throw in a couple of the vibrantly coloured dragon carrots. These spicy yet sweet and purple coloured root vegetables are a delight to the eyes and the taste buds simultaneously.

My son would have learned to shun the overextended purple cabbage and choose the rather unique dulse instead.

Unlike the other vegetables that I have been rambling about, dulse happens to be a variety of seaweed that clings to rocks as it continues to grow.

And if my son did choose to forage for his own dulce then he could possibly have stumbled across the knobbly looking samphire also called sea asparagus that grows wild along the coast.

He could have educated people about munching on tiger nuts which aren’t really nuts but essentially tiny tubers. He could have got people to appreciate the earthy and nutty flavours and the benefits of eating a product that is packed with fibre.

He could choose to cook yardlongs which are really long beans that taste far better than French beans or haricots.

Or maybe he could turn towards Japan for inspiration and use the red perilla leaves which are also referred to as shiso. And for good measure, he could add the Chinese flowering leeks or water spinach which is also called hollow hearts!

He could have done all this and more. Instead, he chose to sleep, wake up, amuse me, stare at the world with wonder and make me realise that life was all about the simplest things.

The super-rich, super successful and insanely driven person that I was choosing to create has no place in what is obviously going to be a better world!