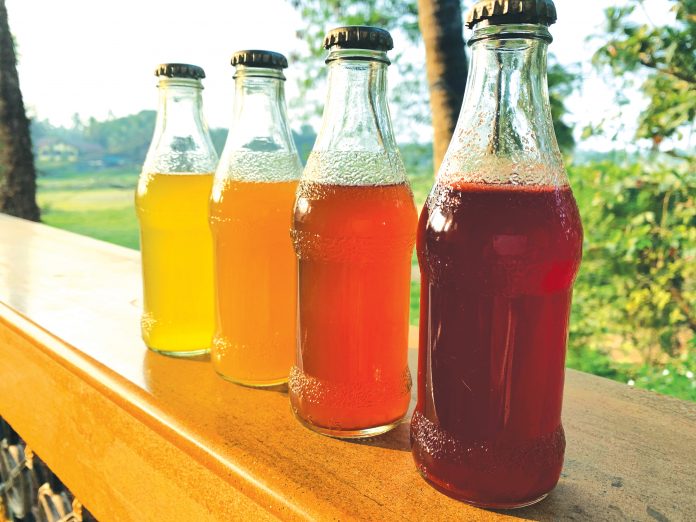 A new trend is brewing among millennials in Goa and it can be found in clear airtight glass containers. NT BUZZ spills the details

Of late, fermented foods have been all the rage owing to their wellness properties and gut and immunity boosting factors. And now, this trend has spilled over into the beverage category.

The popularity of brewing fermented, and in particular, probiotic beverages at home, reached an all-time high during the lockdown last year as hobbyists like Buland Shukla found time to explore the discipline. An age-old food preservation technique, fermenting allows naturally occurring microbes to work on food. “All the best things we consume are fermented: coffee, chocolate, wine, cheese and so on,” says Shukla who has been a fermentation enthusiast for a while.

Fermented beverages are made typically from fruit juices, herbal infusions, soaked grains, green and black tea that have been allowed to ferment for a period of time. These include beer and wine, as well as probiotic beverages like kombucha, kefir, kvass, etc. Most fermented drinks rely on a starter or a SCOBY (symbiotic culture of bacteria and yeast), while others use wild fermentation.

In lockdown, Shukla decided to try his hand at preparing fermented beverages such as kombucha, ginger beers, rejuvelac, tepache, and kvass along with fermented hot sauces and sourdough breads which he launched under the brand ‘Ferment Station’.

For the Panaji-based architect and musician the experience of preparing these involved a lot of trial and error. “We live in a tropical region. There’s a whole lot of bacteria and yeast all around us. The biggest challenge was obtaining pure strains and doing controlled fermentation. The hot and humid climate meant that controlling the fermentation was the toughest task but culturing the flora and fauna was not that big of a problem,” he reveals.

The entire process is fairly easy, he says. “The only tip – and I can’t stress this enough – is to maintain hygiene. Sanitising and disinfecting everything involved. Especially because of our climate.” In the process of fermentation, you are providing favourable conditions for bacteria and yeast to develop, he says, adding, “There is a fine line between fermentation and rot.” While Shukla had success in brewing kombucha, he admits he had a lot of failures early on when harvesting other cultures. “A kombucha SCOBY is quite hardy. I have often said that the SCOBY is like a cat. It can take care of itself. My other cultures, though, are like dogs. They need constant attention,” he adds.

And as with Shukla, fermenting turned into a business venture for many others too. For blender and mixologist, Conrad Braganza creating drinks has been a long-time passion. “I fell in love at first sip with kombucha and I serendipitously managed to procure my own starter. I thoroughly enjoyed the brewing and fermenting experience and my friends and family loved the results.” And so, he started CommuCha with the idea to build a community through the shared love for kombucha – and it just took off from there.

Apart from kombucha, Branganza also offers jun (green tea and honey) as part of his brand– both in a variety of flavours that include exotics like elderflower and lavender and indigenous flavours like lemongrass-fresh turmeric and beet-ginger lemonade. “I’m constantly experimenting with new flavours and in recent times have developed an espresso-caramel, orange-star anise and a strawberry lemonade flavour,” he adds.

Braganza also shares that while he experienced relatively smooth sailing thus far, initially, he did have to deal with a couple of bumps that necessitated draining out a couple of batches and restarting. But through it all, he found the process both a source of intrigue and learning.

Kombucha, of all probiotic beverages, in fact, seems to be the flavour of the month. “Ferments like kombucha are versatile and lend themselves well to making both mocktails and cocktails and can be used as a mixer for straight up alcoholic drinks. They can also be made into sorbets and granitas for those who like their palate cleansers and desserts less sweet,” says Braganza adding that he sees the demand for fermented and probiotic beverages growing.

And it’s because people are becoming more conscious of what they consume, says Priyanka Sinari, a doctor by profession who has also begun experimenting with fermenting. “Everyone is on the lookout for foods and beverages that are clean, organic and also provide maximum health benefits. Fermented products are rich in probiotics that improve gut health and digestion,” she says.

“There are a lot of benefits to drinking fermented beverages. It contains Vitamin B, antioxidants and a lot of probiotics that help in improving gut health, digestion and in turn one’s overall health and immunity. Kombucha also helps in regulating blood pressure and blood sugar levels,” she adds.

She, too, describes the whole process as intriguing. “From growing my own mother SCOBY to brewing the first batch, and then flavouring it: it was an extremely fulfilling and thrilling journey.”

Most of the factors involved in homebrewing are natural elements, like the content of the SCOBY, the temperature, tea leaves, water, sugar, she says emphasising that brewing is an art that can be learned by anyone who has good intuition and a lot of patience. “The result is not going to be consistent every time. It will vary with the slightest change in even one factor. And it takes a lot of patience to just wait and let the magic happen by itself especially since there are no significant changes on a day-to-day basis,” says Sinari, who spent hours reading articles on fermentation to gain knowledge about the science behind the process.

For Sinari it took three-four cycles of brewing for her to figure out what works and what doesn’t to achieve the best product with the perfect combination of ingredients. As part of her food blog, Steth and Stove that she uses as an outlet to explore new dishes and cuisines, she began posting about kombucha and eventually selling her kombucha flavoured, using fresh fruits like apples, oranges, guava and spices, flowers like hibiscus, lavender, butterfly pea, local produce like kokum, red chilli and tamarind. Sinari adds that she’s currently experimenting with ginger beer too.

And while many have been catching up to this trend now, hobbyists like Pratyusha Jain have been practising fermentation for a long time now. Jain was introduced to homebrewing while she was living in the US, and has been making kombucha since 2014. She moved back to India in 2017 and brought her SCOBY along and started selling different flavours of the booch to local cafes in Goa in 2018.

Homebrewing, she says is as good as having a pet. “Kombucha is a living food that needs the same kind of care. You have to keep it well fed and warm, and look after it. Anyone who is ready to take up the commitment can start homebrewing,” she says.

Consuming these beverages help alleviate health issues of the modern world where physical activity is minimal and junk and processed food is everywhere, says Jain, adding, “I think this is not just a passing fad but a lifestyle shift that’s going to last. People may try fermented foods because it’s trendy but they keep coming back because they can feel the difference,” she says.

Dispelling common myths associated with such probiotic beverages, she says: “A lot of times people who are watching their calories think that kombucha has sugar so they must stay away. What they don’t understand is that the sugar in kombucha is food for the good bacteria and yeast, and without sugar, kombucha cannot exist. The sugar ferments and the end product is actually low in calories. Kombucha also has vinegar which forms during the fermentation process which helps with fat loss and weight loss,” she adds.

Similarly, Rashmi Krishnan too has been brewing at home for a year and a half. “My parents are food technologists, so food chemistry is often dinner table conversation – brewing was a fun experience because we saw a lot of theory in practice,” she says. Under her brand Medua, she makes mango and pineapple-flavoured kombucha, with fruit pulp sources from local Goan farmers.

Fermentation is like gardening, but for your gut, says Krishnan. “The process, too, is therapeutic and you have tremendous health benefits. The trend is definitely here to stay and I’m looking forward to seeing how creative the fermenter community is going to get!”