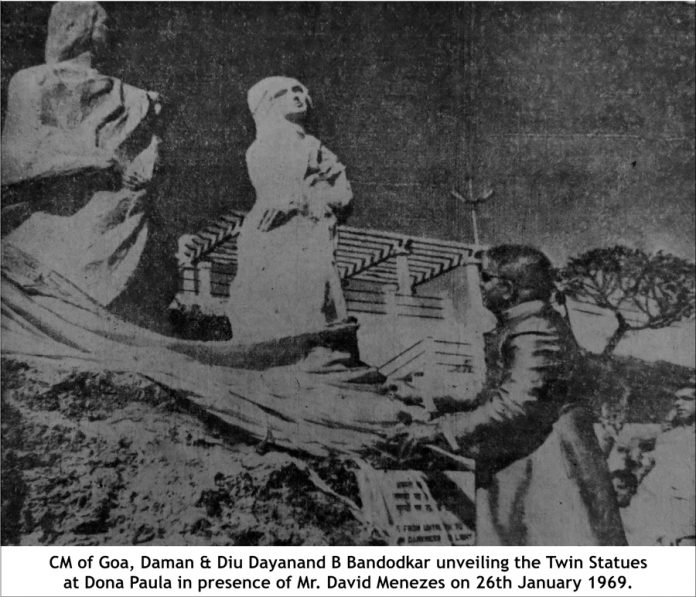 One of the most romanticised locations in Goa, and which draws plenty of visitors is Dona Paula. This prominently fishing hamlet village of the capital city of Goa, Panaji, situated at the South-East tip of the island of Tiswadi (Ilhas) is bestowed with gifts, both by Mother Nature and the handof humans.

From the hillock at Dona Paula, Mother Nature offers a scenic view of the Arabian Sea and a unique geographical locale of a confluence of River Zuari with River Mandovi. The night is lit with lights of the port and the ocean-going ships in Mormugao.

At the outset, let us first set right the identity of Dona Paula. It is a matter of concern that the identity of this locale, in relation to the Twin Statues, has been allowed to run atrociously wild, in the absence of a descriptive board or proper education about these statues. In Spanish language ‘Dona’ is not a name, when it prefixes the name of a lady. It means ‘Mrs’ or ‘Miss’. Hence Dona Paula means Mrs Paula. And the Twin Statues, we see perched on the hillockhave no bearing whatsoever on the lady known as Dona Paula.

In fact, this village was originally, was called ‘Oddha Vell’. If we look at the topography of the shoreline of Tiswadi Island, from Cabo till Siridao, along the North side of River Zuari, we find short coves – Cabo, Marivell, Dona Paula, Havai, Bainguinnim, Cacra, Navshe, Siridao. These coves are found to be of very short ormedium long lengths, as compared to Miramar-Caranzalem stretch. ‘Oddha’ or ‘ordha’n’ means ‘half’ in different dialects of Konkani; and ‘Vell’ means a ‘beach’! Could it be possible that the etymology of this village has arisen out of these short-length beaches, which in local parlance – Konkani, translated to ‘Oddha Vell’ or ‘half beaches’?

However, this village identity was destined to change in the years, after 1682AD.

For general information, and as seen from the existing display boards stating Conego Francisco da Cunha Souto Maior Road, along the old Panaji – Dona Paula road passing through Caranzalem Village, and another one also in the sandy stretch, below two huge rain trees, passing besides the Miramar- Dona Paula beach stretch road, the lands from there till the end of the Dona Paula promontory hosting the Raj Bhavan – Goa, and also the jetties connecting the islet at the present Dona Paula jetties belonged to the Souto Maior family which resided at Caranzalem.

The original residence of the Souto Maior family, at Caranzalem, which once house the Our Lady of Rosary Girls High School, has been totally expunged after construction of the new Church hall. Sadly, even the coat of arms of the Souto Maior Family, which existed in relief, on the pillar near their roadside entrance, has disappeared.

The lady, Dona Paula, was the only daughter of a Portuguese Governor General Amaral Menezes, who was deputed to Jaffnapattan in Ceylon (now Sri Lanka). It is said that he later died when the Dutch conquered these lands. It is surmised that Dona Paula resided at Panelim, on the way to Old Goa via the old Ribandar causeway route, in a palatial mansion which now sports her married surname ‘Solar Souto Maior’. Around 1644 AD, she is said to have been married to Dom Antonio Souto Maior of possible Spanish origin. Dom Antonio was the middle of three brothers, – the elder being a Bishop and the younger sibling supposedly of an immature mind. They having no children, it is said that the entire property of Souto Maior family was transferred to their own community, religious authority to be ‘used for the benefit of the poor section of society’.

After she died on December 21, 1682 AD, she was buried just below the altar of the Nossa Senhora de Boa Viagem (Our Lady of Good Voyage) Chapel in Raj Bhavan Complex. After aggressive emergency renovations, the gravestone was removed from the ground and the same was affixed on the left-hand side wall, in the altar section of the Chapel. After her death, the village, earlier known as Oddha Vell was changed to Dona Paula in memory of this landlady. Nowadays, many fictitious legends have sprouted in the name of this mysterious lady. The pseudo-guides regale visitors with a story that Dona was the daughter of a king, and Paulo, a local fisherman. The two fell in love and since their love would not fructify, they committed suicide here from this hillock. They further inform visitors that if they are lucky, then on a full moon night, they may see Paulo floating around here, in search of his Dona with just a pearl necklace around his neck. This story got a boost from the Hindi blockbuster ‘Ek Duje ke Liye’, – driving this legend sky-high!

Another legend is related to the traditional route from the port of Panaji, which passed along the house of the Souto Maior. This edifice at the end of the cape was later used by the Portuguese administrators as Palacio de Cabo or Palace of the Cape, and which we now know as Raj Bhavan – Goa. This led to another legend, which is not found to conform to facts. It is said that the then Viceroy and this lady Dona Paula, fell in unholy love. This was not acceptable to the Vicerine (wife of Viceroy) and it is believed that she poisoned Dona Paula. This cannot be true, as after death, Dona Paula was given a respectable burial inside the chapel, and not denied this right by way of unnatural death.

Coincidentally, it was in 1968 that a very famous European sculptress Baroness Yrsa Von Leistener, was commissioned to create a befitting sculpture in this beautiful land of Goa by the family of Mr/s Robert Knox, a senator who had visited Portuguese Goa in early 1900’s. Having arrived here in Goa in 1968, she created this sculpture with the identity ‘Image of India’. It had an elderly man in European clothing pointing a finger to the West, while a younger child faced East. It is supposed to have the Indian Ashok Chakra, half embedded in the sculpture. The Baroness explains that ‘she was inspired by the yearning of the European community, having come from the West (the man), to head to the far East (the child), making India (the Ashok Chakra), as their prime destination’. Marble plaques below these statues, explain it all! One marble plaque reads ‘Lead me from darkness unto light!’

As per a report in The Navhind Times, dated January 28, 1969, these Twin Statues were inaugurated by the first Chief Minister of Goa, Daman & Diu Dayanand Bandodkar at 10:30 a.m., after he attended the Republic Day parade in Panaji.

Shockingly the state of these statues is pitiable and in desperate need for immediate relief workmanship. The works on the so-called Dona Paula Jetty beautification has been unjustifiably delayed for over four years and access to this scenic point has been barred for all. Is it not a tragedy that a person from across the seven seas expressed his appreciation of Goa with art, and Goans themselves bar the entry of Goans and others to appreciate this work of art?