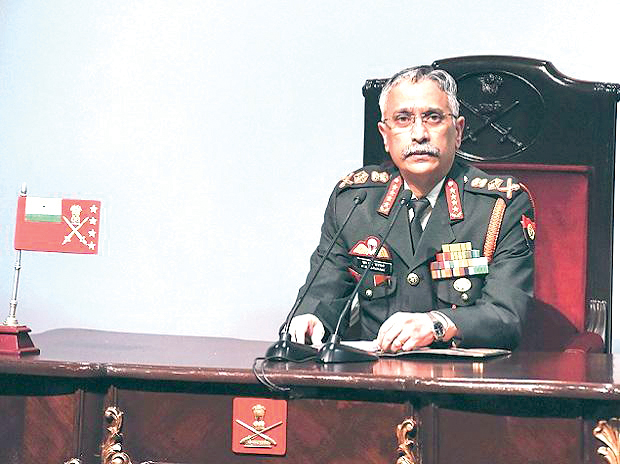 New Delhi: Army Chief Gen MM Naravane on Thursday said India will face increasingly higher security challenges in tune with its rising stature and it must enhance indigenous defence capabilities to maintain strategic influence and freedom of action as external dependence for weapons creates vulnerabilities in times of crisis.

In an address at a seminar on Army-industry partnership, Gen Naravane talked about twin challenges of COVID-19 pandemic and the “belligerence” on the northern borders that his force faced in 2020, and said the government’s focus on self-reliance will boost the country’s overall strategic objectives.

He also said the unresolved borders and wars in the past with “our adversaries” challenge the myth of ‘no conventional war’, adding proxy war, ‘Left wing extremism’ and insurgencies are likely to keep the Army occupied.

“India is now a rising regional global power in Asia, more particularly in South Asia. As we rise in our stature and influence, we will face increasingly higher security challenges,” he said at the seminar organised by the Society of Indian Defence Manufacturers (SIDM).

Indian and Chinese troops are locked in a tense standoff in eastern Ladakh for over eight months.

The Chief of Army Staff said India was lagging behind slightly considering the quick pace of defence modernisation being undertaken by its adversaries, and called upon the indigenous industry to invest in research and development to boost the country’s overall military capabilities.

“The continuous and heavy dependence of the armed forces on equipment of foreign origin needs to be addressed in the right earnest through indigenous capability development and towards meeting the modern day defence requirements,” he said.

“The defence industry is a big enabler for self reliance and capability building and it is a prerequisite to maintain our strategic influence and freedom of action,” Gen Naravane said.

He further said: “We are committed to procuring indigenous equipment and weapon systems as nothing is more motivating for any army then to fight and win its wars with indigenous technologies and weapons.”

Encouraging the private industry to take advantage of the government’s reform measures to boost domestic defence production, he said the Army was strongly committed to support them.

“Our external dependence for weapons and ammunition creates vulnerabilities during times of crisis. However, in the past few years, we have tried to reverse this trend by boosting indigenisation and focusing on dual purpose high-end technology.” he added.

“It may be noted that 75 percent of our priority one projects in the 13th Army plan, costing over Rs 1,50,000 crore are supporting efforts towards the Make in India programme,” Gen Naravane said.

At the seminar, an MoU was signed between the Indian Army and the SIDM that will provide for further impetus to indigenisation under the ‘Atmanirbhar Bharat’ initiative. This MoU was signed on the occasion of 25 years of Army-industry partnership with Confederation of Indian Industry (CII)m officials said.

HC asks UP Police to give X-Ray, post mortem report of dead farmer to Delhi Police