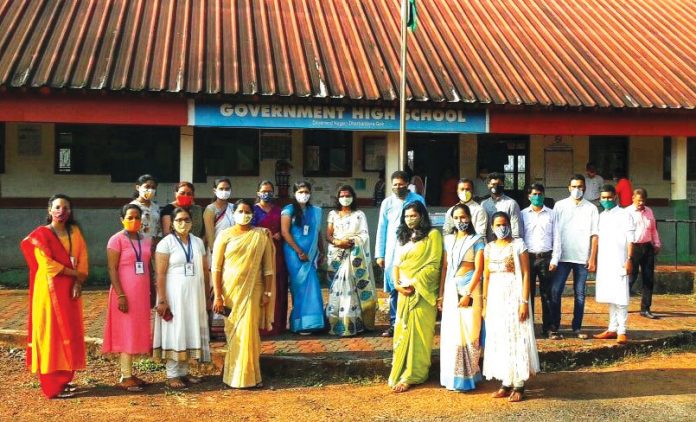 Seventeen entries were received from 10 colleges. Headmistress of Government High School, Dharbandora, Siddhi Kanolkar announced the winners of the competition. First place was won by Aniket Gaonkar from Goa College of Hospitality and Culinary Education, Dona Paula; second place was won by Manjita Dessai from Government College of Arts, Science and Commerce, Quepem, and third prize was won by Hriya Patil of Shree Damodar College of Commerce and Economics, Margao.

On this occasion, an exhibition of photographs of the competition was arranged in the college library. The competition was judged by Snehal Khot, a classical Bharatnatyam dancer; singer, artist and filmmaker, Raviraj Naik and director of plays/dramas and theatre artist, Narayan Kharade.

Speaking on the occasion, principal of GMFC, Shaikh Mohammad Parvez Al-Usmani lauded the progressive strides made by the State in diverse areas. He credited Goan leaders from across the political spectrum and social arena who stimulated and facilitated such positive change in the State that helped Goa to recover from the ravages of the colonial era in the short period. Further, he listed a few things that could be accomplished by the State in future and urged everyone to work towards these directions.

Parvez also laid emphases of making present generation aware about Goa’s struggle for liberation, its history, heritage and culture and informed that towards this the college would be organizing various events during the 60th year of liberation celebration. He also touched upon the NEP and plausible present and future challenges that educationists are likely to face.

On the occasion, students of Government High School, Dharbandora, delivered speeches about the significance of the Goa Liberation Day, while Akhil  Naik from the GMFC sang a song honouring the contribution of all those who were instrumental in the Liberation.

Kanolkar addressed the gathering by paying homage to the freedom fighters whose sacrifices made it possible for everyone to live peacefully and enjoy the constitutional guarantees of justice, liberty and equality. She touched upon the achievements of Goa in various sectors and reminded the attendees that everyone needs to contribute to protect and preserve the ecosystem of Goa for future generations.