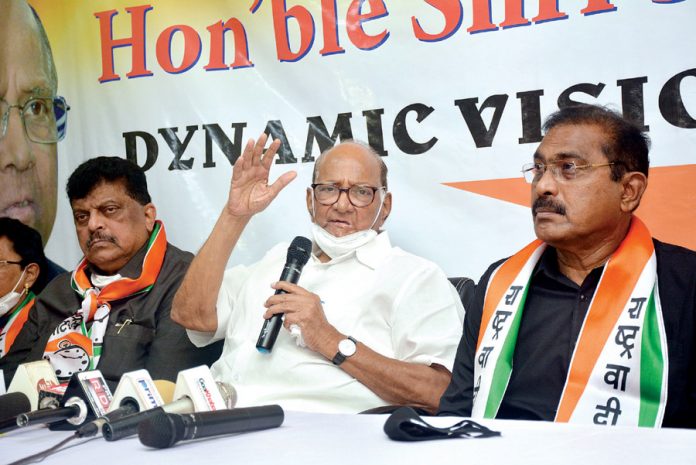 Panaji: Nationalist Congress Party (NCP) chief Sharad Pawar Wednesday said a decision on the party’s alliance with Congress and other like-minded parties for the 2022 assembly elections in Goa will be taken at the national level, six months prior to the polls.

Stating that his party wants to contest the Goa assembly elections as a front with secular parties to provide people an alternative to the ruling BJP, the former Union minister said senior NCP leader Prafulla Patel has been authorised to hold dialogue with other parties to form the front for the polls.

Pawar, who is on an official visit to Goa as a member of the parliament committee on defence to inspect defence establishment and its preparedness, met the NCP’s local leadership in Panaji. Addressing a press conference after attending state executive committee meet, Pawar said decision on alliance for the assembly polls is yet to be taken.

“We are putting in efforts to prop up an anti-BJP front, but nothing has been finalised on alliance as of now. Generally, the decision on having a pre-poll alliance with like-minded parties is taken six months prior to assembly polls. We want to have alliance with Congress and other like-minded parties to give an alternative to the people for a stable government in the state and Prafulla Patel has been given the task of holding dialogue with other parties to form the front,” the NCP chief said.

When asked if leaders from other political parties are approaching NCP, Pawar said anybody is welcome to the party provided they accept the party’s ideology and have an approval from the state executive committee of the party.

Speaking on the farmers’ protest, Pawar said the government should have understood sentiments of the farmers. “But it has not happened. The government did not show any sympathy or held a fruitful dialogue with the agitating farmers,” he said.