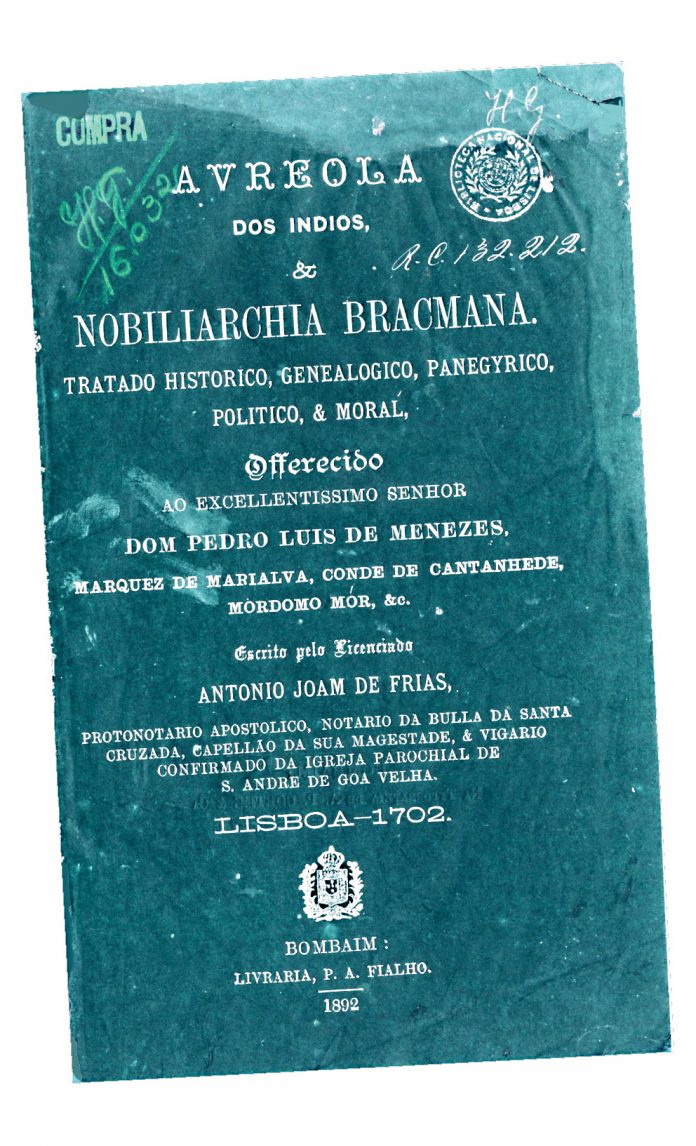 Could it be a mere chance that the new Christian bramhan nobiliarchy that arose within the first few centuries of the advent of the Portuguese became most prominently visible in the Raia – Rachol -Racaim – Loutolim environs?

Sometime around 1763 the king Savaivir Immodi Sadasiv Rajemdra Vodeyar of Somdem or the Saumdekar Raja fled from his capital after being attacked by Hyder Ali and sought asylum from the Portuguese; in exchange he ceded to the Portuguese the territories ruled by him: Amtruz (Ponda), Zambauli (Zambaulim) or Pancmahal (current Sanguem and Quepem talukas), Canacona (Advota) and the port of Cabo de Rama. The territories were conquered by the Portuguese in 1763 with the expulsion of the Marathas from the Mardangad fort; the same year they were ceded to the Portuguese by the Somdem rulers; the Portuguese took the definitive possession of the territories in 1795. The Somdem rulers were feudatories of the Vijayanagar, Marathas and the Bijapur Sultanate at different times. These acquisitions by the Portuguese were the first four of the total seven Novas Conquistas. Later, between 1783 and 1788, the Savamt Bhosle of Sawantwadi, seeking help to fight the Kolhapur chief, one of the offshoots of the Maratha dynasty, ceded Pernem, Bicholim and Sattari to the Portuguese; these were the remaining three Novas Conquistas.

By this time the Portuguese were already constrained for manpower coming from overseas, and were finding it difficult to administer the new conquests, which were not only vast, but also greatly different from the Velhas Conquistas: ‘que tem hum regimen de administracao diferente das outras’ (which have a different system of administration). Sometime in the second half of the 18th century the Portuguese government appointed Antonio Francisco da Miranda of Racaim as the Escrivao de Intendencia Geral de Novas Conquistas (Notary of the General Administration of the Novas Conquistas). After his death the post was inherited by his son Pedro Joaquim de Miranda (1791-1845); after the abolition of that post he was designated as Administrador Fiscal (Fiscal Administrator) of the Novas Conquistas. Before this the family seems to have moved to Loutulim; where Pedro was born. He died in Mardol where he seems to have been staying; most of the orders issued by him were from Mardol. Administrador Fiscal seems to have been a very high position as can be seen from a number of government orders issued under his signature. But what is even more noteworthy is the fact that the position, whether called as the Escrivao de Intendencia Geral or as Administrador Fiscal or by any other name, was hereditary. What this seems to imply, and which is confirmed by some other such postings, is the fact that the position was given because of the past experience of the family in the administration of Novas Conquistas. This is what leads us to wonder whether these were ‘sardesais of a different kind’.

The story turns even more interesting when Pedro Joaquim de Miranda’s son, Constancio do Rosario de Miranda gets into the hereditary position in 1845 upon the death of his father; by this time the Portuguese had a serious problem on hand – the menace of Dipu Rane and Kustoba Rane. The Ranes were loyal sardesais of the Portuguese Estado da India, bound by ‘autos de juramento de vassalagem, obediencia e fidelidade’ (oaths of subjection, obedience and fealty/fidelity). But Dipu Rane, and later Kustoba Rane, wished to break free of these shackles by force of arms.

It is important to remember that though the sardesais were subservient to the reigning monarchs, they maintained their own armies. Often the monarchs funded these armies, as they depended on them in the wars that they fought. But towards the turn of the 19th century, the relations between the monarchs and their sardesais became volatile, with rather too many contenders for the loyalty of the latter; not seldom, two sardesais supposedly loyal to the same monarch, fought one against the other. We have seen it earlier happening to the north of Goa, between the desai of Kudal and the savamt (samamt = feudal lord = desai) of Vadi.

In 1852, and again in 1890, the Ranes attacked the Portuguese, and the latter sought the help of the Naik Pratap Rau Sardesais to fight them. But an interesting, or rather intriguing, aspect of this episode is a fact that Sardesai relates in his family history: in spite of this hostility, and during the course of it, the Rane and the Sardesai families had ‘an excellent and cordial relationship’. [Sardesai, unpublished: The Naik Pratap Rao Sardesai Family of Goa, 36]

Apparently Constancio do Rosario de Miranda played a key role in this fight, and won it for the Portuguese. Note the complex power play that the episode reveals: the Ranes and the Sardesais, both sardesais under the Portuguese and friends among themselves, fighting against each other for Portuguese; and a third sardesai ‘of a different kind’, belonging to the new Christian bramhan nobiliarchy, fully in the employ of the Portuguese, delivering the clinching blow. According to Couto, Miranda was amply rewarded by the Portuguese for this feat and favour; an ‘impressive crest representing the title awarded to Constancio rests atop the massive doorway’ at the entrance of his ancestral house in Loutulim. [Couto, 2004: Goa: A Daughter’s Story, 80]

Couto ascribes Constancio’s success to ‘his ancestors’ familiarity with the territories in which the Ranes operated’. The reference could be to the fact that his grandfather was the Escrivao de Intendencia Geral de Novas Conquistas and his father the Administrador Fiscal de Novas Conquistas, which included the Rane territory. The Rane territory, as part of the three conquistas of Pernem, Bicholim and Sattari became part of the Portuguese holdings around 1783. Antonio Francisco da Miranda, Constancio’s grandfather was appointed sometime in the second half of the 18th century; and his father Pedro Joaquim de Miranda (1791-1845) in 1838. What is striking in this chronology is the fact that the Mirandas were appointed to rule over the Novas Conquistas almost as soon as it was acquired by the Portuguese. They certainly seem to have been given the positions because of the past experience of the family in the administration of these territories. That raises an interesting question: How and when did they get this experience? Or, in other words, who
were the Mirandas before they became Mirandas?