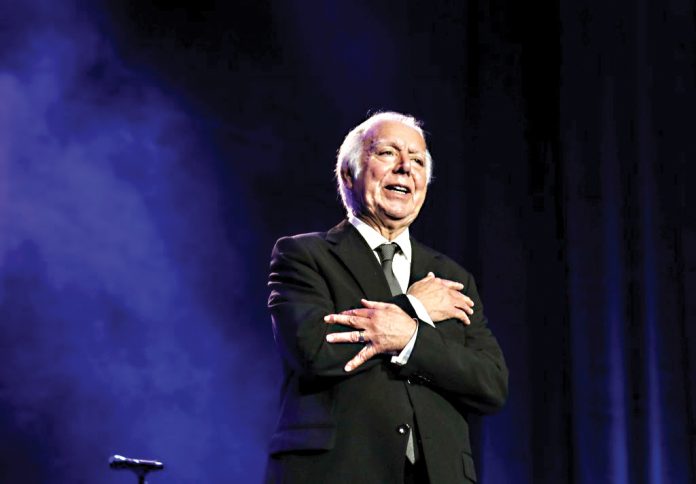 To many of us growing up, fado was synonymous with Amália Rodrigues. Apart from one solitary 45 rpm featuring António Mourão, all the other records on fado that my family possessed in my early childhood years featured her and only her.

That changed with the arrival by post of a 45 rpm record from Portugal, a gift from my paternal aunt Ernestina (Tininha) to my dad in 1978 or the year after.

I was sold just by the record sleeve. In striking colours, it was a sketch of children at play. One of them even seemed to be holding in her hand a bicycle tyre. It used to be our pastime at that age too. With bicycles so ubiquitous, you were never too far away from a cycle repair-man, there was a surplus of discarded tyres that we kids would ‘drive’ and ‘steer’ using a stick with great enthusiasm through the by-lanes of our neighbourhood. Each of us had our very own tyre, with our own identification mark. It’s hard to explain such simple pleasures to kids today. Anyway, that was one of the many reasons that drew me to the record. It seemed very child-friendly.

It was called ‘Os Putos’, a word that sounded suspiciously like (but clearly wasn’t) a Portuguese expletive. Even today, Google translate sometimes gets a little befuddled and gives you the rude word instead.

There weren’t any sleeve notes, just the same painting on both sides. Side A had the eponymous track (which Daddy explained to us meant “The children” or “urchins”, (Google still seems undecided on how best to translate it and temperamentally gives a different one each time depending on its mood) while Side B had ‘O Homen das Castanhas’ (literally The Chestnut Man, referring to a chestnut vendor).

The dearth of other distractions also meant that a new record got our full attention. Although the lyrics meant nothing to me at first hearing, the songs and the singer’s voice were bewitching. The singer was Carlos do Carmo, the first time I ever heard him.

My father was our equivalent of Google translate back then. If I wanted to understand the lyrics of the German, French, Italian or Portuguese records or spool tapes in our house, I would play those tracks, stopping and starting line by line, not easy to do with records, lifting the stylus and finding the same spot again to move on with the translation. Even today, when I hear those tracks, those memories come rushing back.

Both songs are quite catchy and at a lively tempo, but I was partial to ‘Os Putos’ The other song, ‘O Homen das Castanhas’ made better sense to me when I visited Europe in the autumn stretching into winter of 1996, where I encountered chestnut vendors not just in Portugal but also in Germany and Austria (but for some strange reason they’re not that big in the UK).

Today one can look up lyrics on the internet and even follow them in real-time as the song plays. So over the years I’ve gotten better acquainted with the lyrics of both these fados. And I’ve been able to listen to much more of Carlos do Carmo.

But it is only recently that I came to grips with just how large he loomed on Portugal’s cultural
landscape.

The death of Carlos do Carmo (full name Carlos Manuel de Ascenção do Carmo de Almeida, December 21, 1939 – January 1, 2021) on the first day of this year caused an outpouring of grief in Portugal, and a national day of mourning was declared on January 4.

He will be remembered for having introduced new styles to fado, including the addition of orchestras, and the incorporation of other styles such as jazz into the traditional music.

It was after reading an emotional post by Portugal’s greatest living concert pianist Maria João Pires that I was made aware of their musical collaboration in 2012.

“Carlos do Carmo will remain in my memory as a true artist, a man of dignity and enormous culture… he will be missed in our hearts, by all of us,” she wrote. She also posted a clip of ‘Sem Palavras’ (Without words), lyrics by Maria do Rosário Pedreira, music by António Vitorino d’Almeida.

The idea for what turned out to be the 2012 collaboration between Pires, do Carmo and the composer d’Almeida was born three years earlier when all three shared a stage at an event commemorating 60 years in Pires’ pianistic career.

I listened to another track from this collaboration, ‘Morrer de Ingratidão’ (To die of ingratitude), lyrics by Vasco Graça Moura. Each track on the album has lyrics from prominent Portuguese poets and writers ranging from José Saramago to José Carlos Vasconcelos to Fernando Pinto do Amaral. They reveal a completely different side to both Carmo and Pires that I hadn’t heard before.

I tried to find the context to ‘Os Putos’ (lyrics by José Carlos Ary dos Santos, music by Paulo de Carvalho) and find it described as “a major milestone in Portuguese music after the 25 April 1974 Carnation Revolution.”

Its title may have come from the name of a popular 1973 short story book by author Altino do Tojal, (which was adapted to a television series in 1979)although this is conjecture on my part.

The song lyrics hint at struggle, not just the growing pains of childhood: “São os putos deste povo; A aprenderem a ser homens” (The children of the people, learning to be men); but also the robbing of one’s innocence and dignity by a regime that does unflinchingly uses force to quell the democratically-guaranteed right to dissent: “A força de ser, criança Contra a força dum chui, que é bruto.”(The strength of being a child against the force of a cop who is a brute).

The Salazarist regime in Goa ended on December 19, 1961, but the Portuguese people had to endure another 13 years before it was overthrown there.

It is tragically ironic therefore that on the very day marking the beginning of the ‘celebration’ of 60 years since that fateful day, brutal police force was used against a peaceful gathering at the Panaji Church Square, and that days later riot police and teargas were deployed against citizens merely defending their land in Shel-Melauli.

The song chorus has the line “São como índios” (They’re like Indians). It’s a reference to a different kind of “Indian”, the children’s game of cowboys and Indians, and we all know how that ends: the cavalry rushes in and the Indians are slaughtered en masse or taken prisoner, losing their land and becoming second-class citizens, if that.

But this is our Goan conundrum: since 1961, we’re being asked to be Indian, feel Indian, and the overwhelming majority of us do. But through the actions of governments that answer to Delhi instead of listening to the people that elected them, we’re being treated and being made to feel like the other sort of “Indians”, who have to submit to Delhi’s will or be suppressed with brute consequences if we don’t. We’re second-class, we just don’t matter in the mad scheme of things.