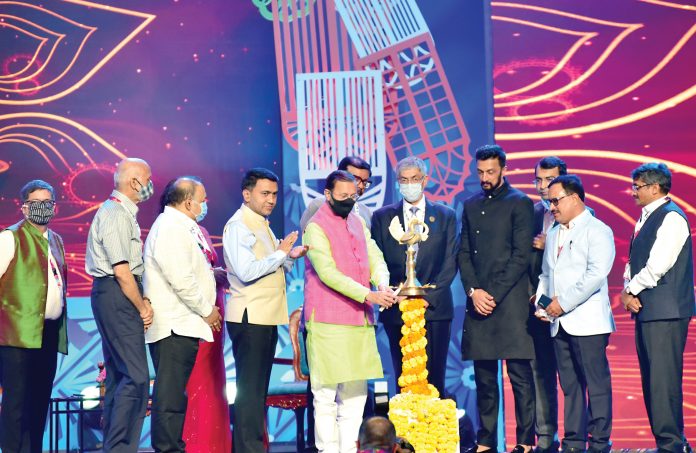 The 51st edition of the International Film Festival of India (IFFI) that is in hybrid mode this year, was inaugurated yesterday. NT BUZZ gets you a detailed report

Despite the COVID scenario, the inauguration of 51st International Film Festival of India took place yesterday at Dr Shyama Prasad Mukherjee Indoor Stadium, Taleigao. But unlike the Golden Jubilee edition, the 51st International Film Festival of India got off to a drab start. Though the expenditure on décor and other elements make it look grand, the empty stadium, absence of stars and celebrities brought down its stature, which has been questioned over the years.

Hosted by actress Tisca Chopra, the ceremony started by showcasing the art and culture of Goa, with Sonia Shirsat singing ‘Hanv Saiba Poltodi Vetam’, followed by some more energetic performances by other troupes.

Speaking on the occasion, additional secretary, Ministry of Information & Broadcasting, Neerja Sekhar said that IFFI is one if the oldest and most significant festival in Asia and it is an exceptional platform to showcase the best of Indian and international cinema.

She added that the festival aims to project the excellence of film, and despite the pandemic, 126 films from 60 countries will be showcased in the international sections. 85 films out of these will be premiere screenings. “IFFI has played a major role in contributing to the understanding and appreciation of film cultures of different nations in the context of their cultural and social ethos and promoting friendship and cooperation among the people of the world,” she said. She further added that to commemorate 50 years of diplomatic ties with Bangladesh, the country was chosen as the Country of Focus.

She ended her speech by saying that even though the pandemic has subdued the light of many events worldwide, IFFI shines bright and hopes to instill the spirit of joy through the beautiful medium of cinema.

In his speech, Chief Minister of Goa, Pramod Sawant stated that IFFI gives an opportunity to members of film fraternity from across the world to explore “the jewel from the west coast of India”.  He also invited Indian and global filmmakers to look at Goa as a preferred destination for filmmaking; ensuring all required support for the same.

He further informed that this year the registration is nearly 2200 delegates and there will be screening of nearly 200 movies in the physical format, following all the COVID norms and
protocols.

Given that the edition will have the premieres of 85 films, Union Minister for Information and Broadcasting Prakash Javadekar stated that this is a huge story of success and a big sign of global recognition which IFFI enjoys. The hybrid mode of the festival, he said, was also in line with the changing world and technologies.

Speaking about Bangladesh as the Country of Focus, he revealed: “India and Bangladesh enjoy such a strong relationship that on the occasion of 100th birth anniversary of Sheikh Mujibur Rahman, the two countries are together making a film titled ‘Bangabandhu’.”

He also mentioned the need for more film shoots to take place in India.

Throwing light on their association with IFFI, High Commissioner of Bangladesh, Muhammad Imran who was present along with his wife expressed deep appreciation to the Government of India – Ministry of Information and Broadcasting for choosing Bangladesh as the Country of Focus. “Apart from recognition of the creativity and ingenuity of filmmakers of Bangladesh it is also a testimony of the depth of relations and the historic bond between the two neighbouring countries – Bangladesh and India,” he said. “Feature films in Bangladesh have always been a highly popular form of mass of entertainment as well as a way of portraying the unique culture and glorious history of the nation. Our Independence movement and the War of Liberation remain as a continuous source of inspiration for the filmmakers who have brought honour for the country from abroad through their talented and internationally acclaimed productions.”

He further said that to encourage quality filmmaking the government has been extending financial support, announcing regular film awards and has set a modern film laboratory complex. “I am confident that the films of Bangladeshi filmmakers which have been selected for screening at IFFI will reflect the high standard of their works.”

Chief guest, actor Kichcha Sudeep, who was felicitated at the function said that cinema along with sports connects each and everyone. “Cinema is one fraternity which in one seat takes you all around the world and gets you the knowledge and closer to the culture of every fraternity across the world,” he said.

During the function, NFDC Film Bazaar was also virtually inaugurated. This year, Italian cinematographer Vittorio Storaro was honoured with the Lifetime Achievement Award and the stalwart who could not be physically present expressed his gratitude through a video message. Chairman of the International Jury, Pablo Cesar also sent across a video message. Recorded video messages from individuals who could not be at the function were also played. These included Siddhant Chaturvedi, Anil Kapoor, Ranveer Singh, Madhuri Dixit, Anupam Kher, Aparskahti Khurrana, and Mohan Lal.

For the first time, the festival is being held in hybrid mode where delegates can participate and watch films and events virtually. IFFI’s very own OTT platform will enable delegates to stream films, attend the NFDC Film Bazaar, Masterclasses and In Conversations online.

IFFI will also be highlighting the cinematic heritage of India. On the occasion of 150th anniversary of the Father of Indian Cinema, Dadasaheb Phalke, four films of his will be screened. Further, a Retrospective Section will showcase some of the best films of filmmaker Satyajit Ray. IFFI will also pay homage to film personalities who passed away in the previous year.

IFFI has also collaborated with the Film and Television Institute of India (FTII) for a film appreciation course which will be organised virtually on the OTT platform and will be freely accessible to the students.

Following the inaugural, ‘Another Round’ directed by Thomas Vinterberg marked the beginning of the festival. The World Premiere of ‘Mehrunisa’ will be the Mid-Fest film while the Japanese film ‘Wife of a Spy’ will bring the
curtains down.