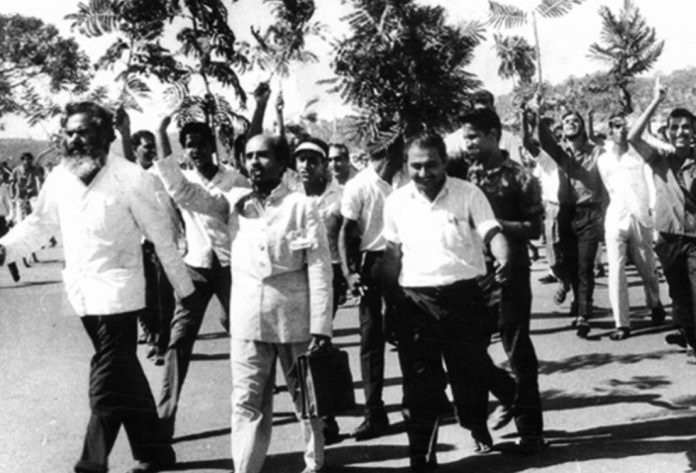 Today, on January 16, 2021, we celebrate the historic Opinion Poll Day as ‘Asmitai Dis’! Let us now continue on our journey to make ourselves aware about history created by Goans, 54 years ago!

After his meeting with Prime Minister Morarji Desai, Purushottam (Bhau) Kakodkar met another political strongman from Maharashtra, SK Patil and was assured that if elections are held, they will only be “issue based” elections. This proposal was placed before the Congress Parliamentary Committee meeting on September 3, 1966, and it was decided to hold issue based election to decide this merger issue.

Relevant instructions were given to the Home Ministry to draft the required rules. However, the Home Ministry Office was in a dilemma! What do they name the Act/ Rules? The term ‘Opinion Poll’ did not reflect anywhere in the Indian Constitution. It could be a border line ‘plebiscite’, but it did not address any constitutional reform, it addressed a solution to a difference of preferences, between peoples of the same land. Alternatively, the term ‘referendum’ could have been used, but it was directly related with the Kashmir issue, and the Central Government did not wish to create unnecessary ripples in international diplomatic circles.

This dilemma was put to rest by a retired secretary of the Home Department, L P Singh, who suggested that this exercise be referred to as an Opinion Poll. This name was accepted; and the draft was then baptised as The Goa, Daman and Diu (Opinion Poll) Act, 1966 (Act 38 of 1966).

This was then placed in the Lok Sabha and passed on December 1, 1966. The Rajya Sabha passed it on December 7 and finally instituted it on December 11, 1966. This one of its kind Rules & Acts were later published in the Government Gazette, Series I No 37 (Supplement) dated December 15, 1966. These Rules and Acts passed in both the Parliamentary houses needed the assent of the President of India to become a law; and this was done on December 16, 1966. The law was now in place to hold the Opinion Poll in Goa, to decide whether to merge Goa with Maharashtra (and Daman & Diu with Gujarat) or to maintain a separate identity!

The reigning Goa Government was asked by the Central Government to resign to create a level playing field for all parties. The Election Commissioner of India was given the task to carry out this Goa Opinion Poll like any other free and fair election held in India, except that in this election, the ballot would have only two options to vote – merger or union territory. The symbol allotted for merger, was a rose (fuul); and to vote for Goa as a Union Territory, the symbol was two leaves (donn panna).

Thereafter activities in both camps in Goa, subtly assisted by the Maharashtra Government, began at a furious pace, with speeches/ singing/ literature/ play acting, etc. Each camp pitted their strengths and wits against each other.

It is important to note that at the time of holding the Opinion Poll, the population of Goa could be briefly divided as about 35 per cent Catholics, 63 per cent Hindus and about three per cent Muslims and others.

Fiery speeches by prominent Goans, unearthed the love for the land and culture among its populace. Jack de Sequeira, the Leader of Opposition, assisted by spirited leaders such as Victoria (Mummy) Fernandes, led the fight against the merger from the helm. Sequeira traversed the length of his areas, day and night, burning the midnight oil, inspiring and motivating voters, and accepting help from all ages to reach his goal. Mummy Fernandes, ventured into Pernem, a merger hot-spot, dressed in a nine-yard saree, confusing the people with her attire. The situation turned volatile, as she started her speeches in favour of anti-merger; but good sense prevailed as elders of the village told the people to respect the lady and listen to her; they were free to reject her proposals, if not acceptable. She placed the facts, bare before the people, and finally reached Panaji, triumphant, and to accolades from leaders like Ravindra Kelekar. Other notable leaders were Urminda Lima Leitao, Armando Colaco, Shankar Bhandare, Ravindra Kelekar, Professor Armando Menezes.

The litterateurs picked the pen like a sword! ‘Rashtramat’, a prominent Marathi daily printed at Margao, with Editor Chandrakant Keni, carried a fiery Konkani column called ‘Brahmastra’ penned by Bhembre with an aim at convincing the upper class Hindu population, about the pros and cons of voting for a merger. It worked! The merger group roped in stalwarts like P K Atre, the
editor of ‘Maratha’.

The merger group also brought famous music groups led by Lal Bavta Kala Pathak Shahir Amar Shaikh, Shahir Sable, and others to convey a spirit of merger among the Goans. In retort, the music-loving Goans rose to the occasion and formed the ‘Jai Gomantak Kala Pathak’. ‘Goenchya Mhajya Goenkarano’, a motivational song, with lyrics written by the famous poet Manohar Sardesai and melodiously sung by Ulhas Buyao took Goa by storm. It literally became the anthem of the Opinion Poll. Even today, it inspires individuals, generations apart! The Katkar Sisters and Uday Bhembre too added to the singing spirit. The local tiatr artistes, as well as accompanying musicians did not spare an inch of Goan soil to attract crowds and enact plays to educate the populace about the effects of merger.

However, the role of Shabu Desai of Canacona cannot be overlooked, as he was a core MGP member and also part of the Bahujan Samaj. Though he was all in favour of the political objectives of his MG Party, he was unhappy with the decision of his leader Bhausaheb Bandodkar. He resigned from the MG Party and started a unique campaign against merger. He carried a ‘Mashaal’ or ‘Sangha Pradesh Jyot’ (Flaming Torch) as his propaganda symbol, and was the only team to have a symbol for the Opinion Poll campaign, after invoking blessings of his deity Sri Shantadurga Kunkalkarinn. People appreciated his spirit and courage to stand with his principles.

The author wishes to also state that there were many individuals, whose glories have not been sung here. And efforts need to be made to bring them on a unbiased platform, to celebrate their efforts, with care taken not to honour freebies! This would taint the sincere efforts of those that toiled and worked,
sincerely!

Goans had voted for a separate identity. This day is celebrated in Goa as ‘Asmitai Dis’! In the years to follow, the demand of Goans to accept Konkani as the Official Language of Goa came true on February 4, 1987, after a 555 days agitation. This linguistic step further led Goa being declared as the 25th State of the Union of India on May 30, 1987, by the PM Rajiv Gandhi. Konkani language was granted a respectable status in the 8th Schedule of the Constitution in 1994.

Today and in the years to come, let us proudly hold up the colossal efforts of our past generations to bring pride to us, as Goans! Happy Asmitai Dis!