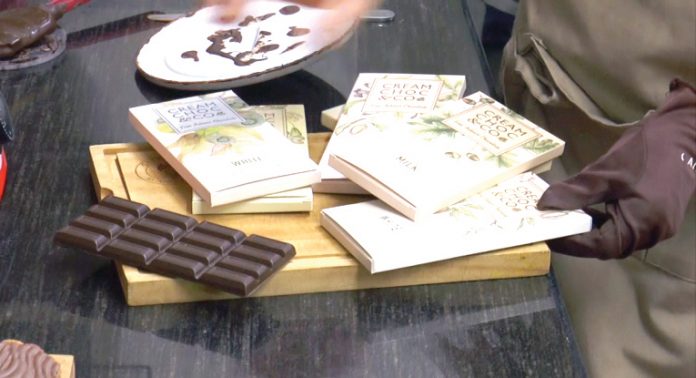 The Navhind Times held its first live culinary show, ‘Cooking from the Heart’, on Sunday, January 10. Chefs of Cream Choc, Davide Passarella and Joelle Berthet demonstrated gelato and chocolate making on the hour-long session that aired on the Goa 365 channel.

Passarella who has been delighting Goans with his creations, especially his decadent and artisanal gelato, from Cream Choc in Anjuna since 2011, recently opened his second outlet in Panaji. Using only fresh and locally-sourced fruit, milk, and cream, plus a few imported exotic Italian essences, he has developed a dedicated following among the locals and tourists. The fascinating variety of gelatos span from seasonal to exotic flavours, and settling for just one helping is extremely hard! Chickoo, salty butter caramel, panacotta strawberry, lemon cheesecake, mango, pistachio, and the premium Belgian chocolate, are some of the favourites among the patrons. For those not much into dairy, there are sorbets as well.

Berthet who came to Goa ten years ago, learned the art of chocolate-making from master chefs in Switzerland, her home town. She described Goa as half way between traditional and modern India. For the show, she demonstrated candied orange dipped in chocolate, and chocolate-coated almond Florentine.

She began with the candied orange and demonstrated each step giving useful tips. The orange slices take approximately four days and four rounds of cooking in sugar syrup before they are ready to go into the oven. After cooking at 150 degrees for 10 minutes, the slices are now ready to be dipped in chocolate. “The worst enemy of chocolate is moisture so it is extremely important to ensure the orange slices are dry before dipping into the chocolate. This further ensures the slices do not lose their shape and not just taste good but also look good when ready,” she advised. She also explained and exhibited how chocolate is to be melted.

The Florentine which is a traditional European confection can be made using almonds, cashew nuts or hazelnuts. Cooking the mixture on a very slow flame using a heavy-bottomed pan and a wooden spoon, Berthet then demonstrated the Florentine.

Next on the agenda was Passarella’s signature gelato. Explaining the difference between ice cream and gelato, he said: “The biggest difference is the fat content. The gelato has no artificial fat added besides the fat in the cream and milk. The thickening agent we use is carragenan.” He then showed the process of making gelato at home starting from pasteurising of the milk. The ideal temperature when sugar and carragenan is to be added to the hot milk, he advised, is 30 to 40 degrees. The final stracciatella gelato was then mixed with a hazelnut paste to which was added melted chocolate and milk. The end product was garnished with roasted nuts and was simply heavenly.