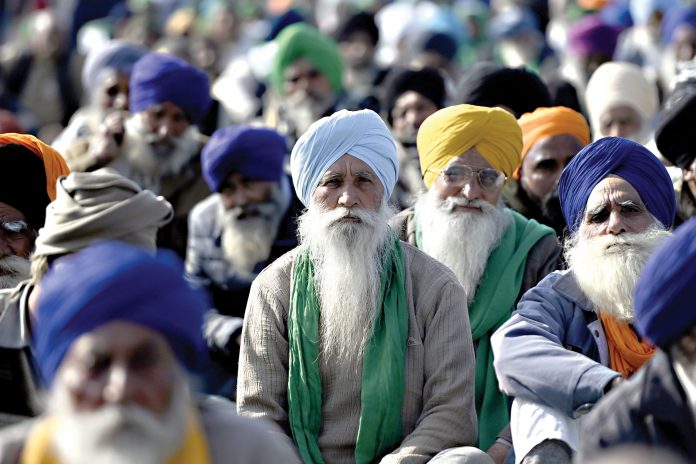 Remember the Hindi films of the 1960s socialistic era when the villain was often the ‘evil’ exploitative ‘udyogpati’ (industrialist)? Now, decades later, the farmer protests have recreated a familiar stereotypical ‘enemy’ figure. In the winter chill of the Singhu border, posters targeting ‘Adani-Ambani’ jostle for space with those lampooning Prime Minister Narendra Modi. On the ground in Punjab, Reliance Jio telecom towers have been vandalised, while Adani products are being boycotted. Such has been the sustained attack on the two corporates in particular that both, the Adani and Ambani groups have been forced to issue public statements that they have no plans to enter contract farming in the future. So what explains the manner in which two of India’s biggest companies find themselves in the crosshairs of what began as a political confrontation between farm unions and the Modi government?

Corporate India has rarely been targeted in such an unrelenting manner in recent times. The last time a mass agitation appeared to draw business groups so directly into their ambit was during the India Against Corruption protests of 2011. Then, the likes of Arvind Kejriwal chose to repeatedly target specific corporates as part of their wider attack on entrenched political-business elites. But once Kejriwal came to power, he appeared to gradually change track: the harsh realities of governance saw him slowly pull back from the politics of unbridled accusation. Instead, the space vacated by the Kejriwal brand of political activism has been filled by the Congress’ Rahul Gandhi.

It was Rahul who chose to make the attack on ‘Adani-Ambani’ an integral part of his 2014 election campaign. Undeterred by electoral defeat, he raised the pitch by accusing the Modi government of being a ‘suit-boot ki sarkar’ in 2015, a jibe that appeared to stick and embarrass the ruling party and almost force it to announce a series of policy initiatives aimed at reinforcing the image of a ‘gareebon ki sarkar’. Even the highly contentious 2016 demonetisation announcement was driven by a desire to change the narrative to an anti-rich, pro-poor political rhetoric.

Now, five years and another election defeat later, Rahul appears to have returned to his pet theme, this time piggybacking on farmer anxieties. On the face of it, the Congress leadership’s attack on ‘Adani-Ambani’ appears puzzling, even a tad hypocritical. It was the Congress, after all, as the original party of power that built patron-client relations with preferred corporate houses. The Ambani empire took off in the 1980s under the benevolent gaze of the Indira Gandhi-Pranab Mukherjee duo. Gautam Adani cut his business teeth in Gujarat when the Congress-backed Chimanbhai Patel government gave him cheap land in the early 1990s. Neighbouring Maharashtra too signed early infrastructure projects with the Adanis. Indeed, both Ambani and Adani, like so many other favoured business houses, were beneficiaries of a previous Congress era of licence-permit raj politics. And yet, it is only now that two of India’s wealthiest business groups are finding it difficult to extricate themselves from a snowballing political controversy.

What has changed so dramatically? Firstly, the media landscape has transformed in a manner that has completely changed the rules of the game. In a multimedia universe with thousands of varied platforms – from YouTube channels to social media sites – it is almost impossible to ‘control’ the storyline. The government’s propaganda machine is now matched by a form of citizen activism in which there is no place to hide: viral videos now have acquired a life of their own with lines between truth and hype totally blurred. Even the most powerful and influential business houses are now hostage to public rage fuelled by a noisy and frenzied media eco-system in which there are no pre-decided rules of engagement.

Secondly, when the battle of perception is pitched as ‘kisaan’ versus fat-cat industry and their political patrons, there can be only one winner. A farmer protest can be denounced and demonised only upto a point. The ‘anna-data’ shivering in the freezing winter when contrasted with the luxurious lifestyles of India’s rich is an imagery that is enough to arouse a sense of injustice, thereby ensuring stark emotional responses taking over from any sense of rationality. That the Adanis and Ambanis come from Gujarat, the home state of the Prime Minister, only serves to reinforce the perception that their proximity to power confers an undue advantage. The Prime Minister too has never hidden his special equations with the Ahmedabad-based Adanis for example: he flew an Adani private aircraft throughout his 2014 election campaign and even arrived in Delhi to take over as Prime Minister in the same aircraft.

Finally, there is a reality of the exponential growth in the fortunes of a handful of India’s billionaire business groups in the last decade even as the income levels of a vast majority of Indians remain stressed in recessionary times. The near-total dominance exercised by specific industrialists in lucrative sectors – then be it telecom, petroleum, ports and airports – only serves to underscore an unequal economic landscape in which there is no level-playing regulatory apparatus. In normal times, this might have been overlooked: after all, the liberalisation era has seen the Indian middle class finally stop vilifying the wealth-creating billionaire as necessarily ‘evil’ and actually celebrate entrepreneurial zeal. But in COVID times, where jobs are being lost, the future is uncertain and growth is paused, there is a sense of disquiet over acutely disproportionate benefits being conferred on a few.

To that extent, the farmer protests against ‘Adani-Ambani’, however amorphous they might be, are symbolic of a wider discontent against emerging market monopolies and the fears, real or imaginary, that these monopolistic tendencies will only widen income differentials in the future. Rather than focus on a genuine cost-benefit analysis of farm reform, the politics of maligning industrialists has been revived. This now boils down to a trust deficit, a growing mistrust of the nexus between untrammelled state power and big business.

In 2014, Modi swept to power by promising to act against political corruption. ‘Na khaoonga, na khane doonga’ (I won’t be bribed or allow anyone to take a bribe) became a rallying cry that served as a magnet for millions of Indians who were angry and fatigued with a scam-tainted UPA government. Modi has managed to artfully keep his personal image more or less intact but the charge of cronyism is one which he needs to still shake off. Else, the gentle winds blowing across the Singhu border will only gather more speed.

Post-script: At the Singhu border, I met a group of young farmers, who happily showed me the latest video mocking the ‘Adani-Ambani’ bond with the government. Interestingly, I noticed they were all Jio mobile subscribers!

Every Pandemic Needs An Exit Strategy-I