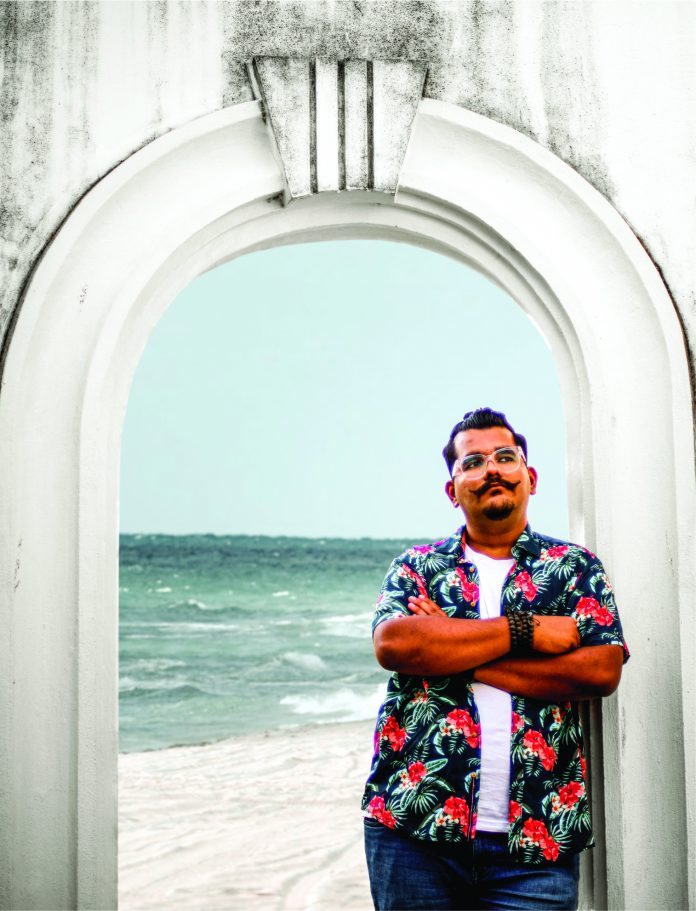 When one visits a star coffee outlet and is appreciative of the finesse of the beverage, one rarely if at all, thinks about all the labour involved in the process, be it in the picking of the coffee beans, drying these, etc. And indeed, while we may be living in a nation that is progressing by leaps and bounds daily, we often overlook the common man’s contribution at the foundation, right from sewage workers, farmers, factory workers, etc, without whom, we would not be able to survive and thrive.

And thus photographer and filmmaker Manan Sodhi set out to document the lives of these people resulting in the photobook titled ‘I, The Common Man’, which was released recently at Cafe Rasa, Panaji.

“I wanted to pay tribute to those people whose work does not receive much attention but who are important in bringing up the country,” says Sodhi.

Hailing from Punjab, Sodhi who was brought up in Bangkok came to India in 2014 to pursue photography and filmmaking. After scouring through different film schools, Sodhi finally chose to study the art at the One School Goa, doing a three-year degree course in photography and filmmaking. He was then on the school faculty for a couple of years before moving to work in Mumbai and Delhi. He then chose to return and work out of Goa.

‘I, The Common Man’ is his fifth photobook featuring individuals that he shot from across the span of India. Getting people to agree to be photographed is a skill in itself, he says. “I first work at developing a comfort level with a person. It is more challenging when it is with people from the working class as they are often in two minds whether to interact with me or not. Ladies especially are more secretive and cover their face,” he says. Often, he tries to spend the day with the person he wants to photograph. “Once the person starts communicating more freely and you know that a comfort zone has been developed, you know you can easily get to know the person in visual form.”

Among the people he has photographed, one that especially struck him was of a balloon seller, with origins in Lucknow, he encountered at the Goa Carnival.

“I had seen her for the last three Carnivals and so I thought I should interact with her. However, when I asked her for her name she replied ‘gubarre wali’. I found this strange and asked her for her story,” he says. Sodhi then learned that in the region where she hails from, people aren’t given a name until they are 20-25 years and they begin earning from themselves. These people are then named after the occupation they opt for. “

This made me think. Having a name gives one respect. It is how one is recognised by people. Not having a name seems like a very painful thing for a person,” he says.

Another interesting story that he came across was of a saffron farmer he met in Kufri, Himachal Pradesh. “I was hunting for saffron and was directed to this 96-year-old man clad in simple clothes and slippers who sits near the Church in Kufri. After I purchased some from him we got talking and he told me that he had around 26 farms of his own. I thought he was joking,” narrates Sodhi.  The man then offered to show Sodhi his farm. “Next thing I know a Mercedes shows up with a driver! The man, I learned, also had BMWs and a big bungalow. However, despite all this wealth, he still chose to stand near the Church every day, dressed simply, and sell his saffron. The man told me that this was how he began and he didn’t want to leave his roots,” says Sodhi.

But despite his ability to put people at ease and get them to agree to let him photograph them, there have been instances when a picture he really wanted didn’t work out, including a local bangle seller and another who farmed turmeric. “There was also a lady from Caranzalem who was an acid attack victim but I was not able to develop that comfort zone with her. She was just too scared to have any man around her,” reveals Sodhi. In another instance, Sodhi encountered a young boy of nine or ten years who was part of the labour force on a reputed construction in the state. However, he was not allowed to photograph the boy as the contractor wanted to avoid controversy.

“There was also a chaiwala (tea seller) in Aldona that I really wanted to photograph. I went and spoke to him and told him I would be back in a week to shoot him. However, when I returned I got to know that he had passed away,” says Sodhi.

In fact, according to Sodhi, 75 per cent of the photographs in his book are from Goa. “Goa was the one place where I found a lot of variety. Plus, the people here are very simple,” he says, while admitting that he did not initially expect to find so much content in the state. “Before coming down to Goa, my relatives who had been here told me that Goa was a place of beaches with fisherman, boat riders, coconut sellers, etc. But when I came down I realised that there was a lot going on here. And so with this book I also want to break the stereotype that people have that Goa is only about beaches and tourism,” he says.

While the book initially had the chance to be released at a film festival in Dharamshala, Sodhi states that while this may have garnered more sales for the book, he was firm in his belief that more than sales, he wanted to create awareness about the work done by common man. And Sodhi does believe that the pandemic has opened our eyes to the work done by the working class people.

Sodhi already has a theme in place for his next book. “My next story will look at local farmers in every field and on miners. This will be difficult because there are a lot of permissions involved. But I want to bring out the people who are hidden in the shadows,” he says.