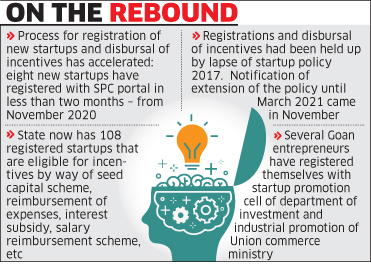 The state’s startup ecosystem, which   had slowed down considerably in the previous year, is poised to receive a boost in 2021 and in two months eight new startups have registered with the state startup promotion cell.

Ankita Anand, CEO of the Goa startup promotion cell,  told  ‘The Navhind Times’  on Wednesday  that the process for registration of new startups and disbursal of incentives has accelerated:   eight new startups have registered with  the SPC portal in less than two months – from November 2020.

She said that registrations and disbursal of incentives had been held up by the lapse of the startup policy 2017.

“The notification of the extension of the policy until March 2021 came in November; only after which we could commence work,” said the CEO.

SPC officials want to schedule a meeting of the high-powered committee this month. The committee is mandated to approve new units and their incentives.

It is headed by Chief Minister Pramod Sawant.

The last meeting was held in February 2020.

Anand added that the cell is also trying to get back the Rs 3 crore earmarked for incentives, which was given back to the state treasury.

“The money had to be returned to the state as the policy had expired in September 2020, and the government had asked for it. We are following up with the directorate of accounts to receive the funds,” she disclosed.

Reiterating that the local startup ecosystem is strong and growing, Anand pointed out that several Goan entrepreneurs have registered themselves with the startup promotion cell of the department of investment and industrial promotion of the Union commerce ministry.

The DPIIT portal shows 163 Goan startups while the state portal has 108 startups. We are in the process of technical integration of the data. Towards ease of doing business, we have also made Goan startups enrolled with the central portal eligible for incentives, Anand said.

“They need not register again with the state cell to claim incentives,” she said.

The government has been keen on creating conducive ecosystem for startup entrepreneurs due to their potential to generate self-employment.

The government not only wants to boost local startups but also attract units from other states.

The coronavirus pandemic has forced several IT entrepreneurs to set up office in the state.

Goa’s startups are of varied types and have a workforce ranging between five-six employees or 20 employees, if they are bigger.

Several startups have international clients and do work in block chain and AI technology.