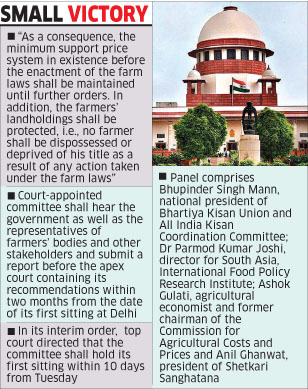 The Supreme Court on Tuesday stayed the implementation of the controversial new farm laws till further orders and constituted a four-member committee to resolve the impasse over them between the Centre and farmers’ unions protesting at Delhi borders.

A bench headed by Chief Justice of India S A Bobde said, “As a consequence, the minimum support price system in existence before the enactment of the farm laws shall be maintained until further orders. In addition, the farmers’ landholdings shall be protected, i.e., no farmer shall be dispossessed or deprived of his title as a result of any action taken under the farm laws.”

The bench, also comprising Justices A S Bopanna and V Ramasubramanian, said the court-appointed committee shall hear the government as well as the representatives of farmers’ bodies and other stakeholders and submit

a report before the apex court containing its recommendations within two months from the date of its first sitting at Delhi.

In its interim order, the top court directed that the committee shall hold its first sitting within 10 days from Tuesday.

The bench said this committee is “constituted for the purpose of listening to the grievances of the farmers relating to the farm laws and the views of the government and to make recommendations”.

The bench said it deems fit to pass the interim order “with the hope and expectation that both parties will take this in the right spirit and attempt to arrive at a fair, equitable and just solution to the problems”.

The bench also lauded the farmers for carrying out agitation against the farm laws peacefully and without any untoward incident.

“While we may not stifle a peaceful protest, we think that this extraordinary order of stay of implementation of the farm laws will be perceived as an achievement of the purpose of such protest at least for the present and will encourage the farmers bodies to convince their members to get back to their livelihood, both in order to protect their own lives and health and in order to protect the lives and properties of others,” the bench said and posted the matter for further hearing after eight weeks.

The top court passed the interim order on a batch of petitions challenging constitutional validity of these farm laws and also raising the issue of farmers protesting at Delhi borders.