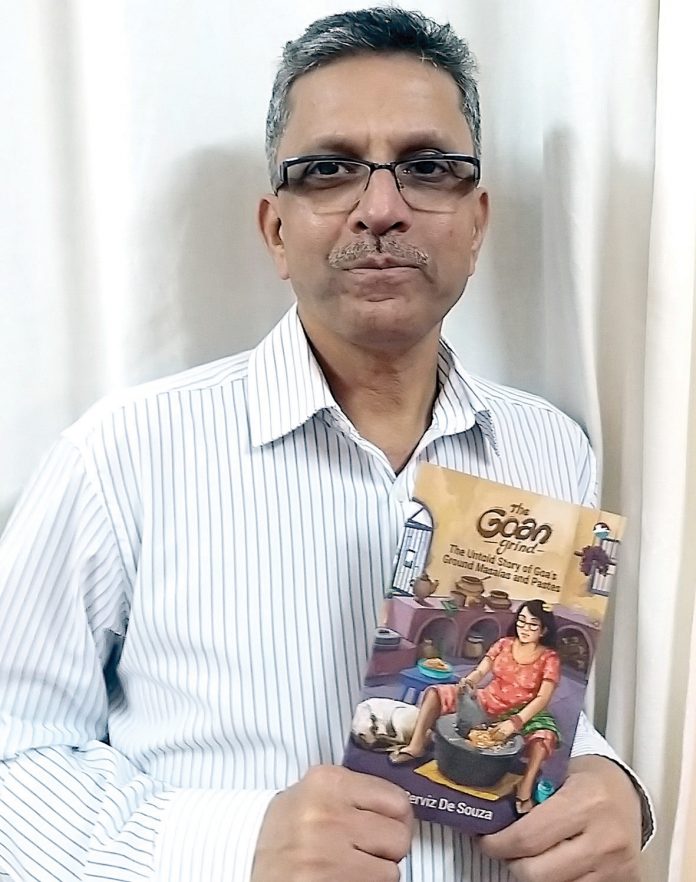 ‘The Goan Grind’, by Abu Dhabi-based Perviz De Souza is a narrative of Goan life which focuses on Goan masalas and pastes that are traditionally ground using a ‘rogddo’. NT BUZZ learns more

Even as a child, Perviz De Souza was always fascinated by the manner in which the Goan masalas would transform from a handful of mixed ingredients into a rich paste when ground together with patience and love. “Everything in an old Goan kitchen would have a story to tell – be it a ‘kunnlem’ (earthern cooking pot) or a ‘doulo’ (ladle made of coconut shell),” says the Abu Dhabi-based Goan anchor, artist and communications professional. And it was these memories coupled with the thought of storytelling through food that inspired him to begin writing ‘The Goan Grind’ about two years ago.

‘The Goan Grind’ is a narrative of Goan life that finds its source in the kitchen. It focuses on Goan masalas and pastes that are traditionally ground using a ‘rogddo’ (grinding stone).  “You could say it is the life story of a ‘rogddo’ in an old Goan kitchen! Some readers might question why not use the ‘fatorn’ (flat granite slab) instead – but for me it was always the ‘rogddo’ that was synonymous with grinding, and I knew that the humble yet quintessential ‘rogddo’ would tell a story like no other,” he says.

The book weaves together the life of a simple housewife Milagrin, her culinary abilities and lifestyle, while incorporating various aspects of old Goan kitchen spaces including traditional cooking utensils and practices, which in many cases have almost disappeared.

“The Goan kitchen is not what it was two to three decades ago, and in a way, this may be the last Goan generation that continues to be aware of and even use traditional methods of cooking,” he says, adding that he has also tried to collate a glossary of traditional Konkani terminology for traditional cooking utensils and aspects of cooking, the names of which may otherwise be lost to time.

“Much of the story comes from my childhood memories, but a lot of the information and terminology has been sourced from people like my mother and others of her generation who have kindly shared their wisdom and knowledge. The recipes are tried and tested from my personal collection gathered through the years,” says De Souza, adding that the greatest challenges he had while putting together this book was to collate all the possible Goan recipes that required a ‘rogddo’. “If there are any missing, those will certainly find their way into a second edition!” he says.

And while masalas or spice mixes are a part of many culinary traditions, according to De Souza, there are some aspects that are unique to Goan masalas. “A true Goan swears that no curry is perfect unless you have real Goan palm vinegar, a good mix of dry red chillies, or Goan jaggery,” he says. Sharing some more facts, he states that grinding masalas without using any water and only vinegar was done to ensure longevity. But on the other hand, adding fresh coconut meant that the curry would not last too long. “Think also of traditional cooking utensils. If you consistently keep a vinegar-based preparation in a metal dish, especially aluminium, you can see how the acidic vinegar begins to corrode the metal. But that would never happen with an earthen cooking pot. Thus, a lot of the things we were taught are ‘just done that way’ do have wisdom and science behind them,” he says.

A passionate cook, De Souza, who has been actively involved in promoting the Goan ethos through culture and language as part of the diaspora, states that while Goa certainly has more than its fair share of good restaurants, it is not necessarily the case outside the state. “For me, as a Goan living away from home in a multi-cultural environment and exposed to a wide variety of culinary styles, I have often been surprised and shocked at the offering made in the name of Goan cuisine by many Indian and multi-cuisine restaurants. One almost certainly hears of a ‘vindaloo’ or a ‘Goan prawn curry’, but in reality these are a few and a far cry from the original. Many so-called Goan restaurants around the world serve a poor representation of the real thing,” he laments, adding that signature Goan dishes need to be popularised to protect their identity and importance to Goan culture and lifestyle.

De Souza is already putting his finishing touches on his second book which will again focus on chronicling Goa through the socio-cultural and culinary lens. “Some argue that there is no space for another Goan cookbook. We have to change that perspective and work towards popularising and memorialising an authentic Goa in the face of a rapidly changing world, not as an achievement for ourselves, but for posterity,” he says.