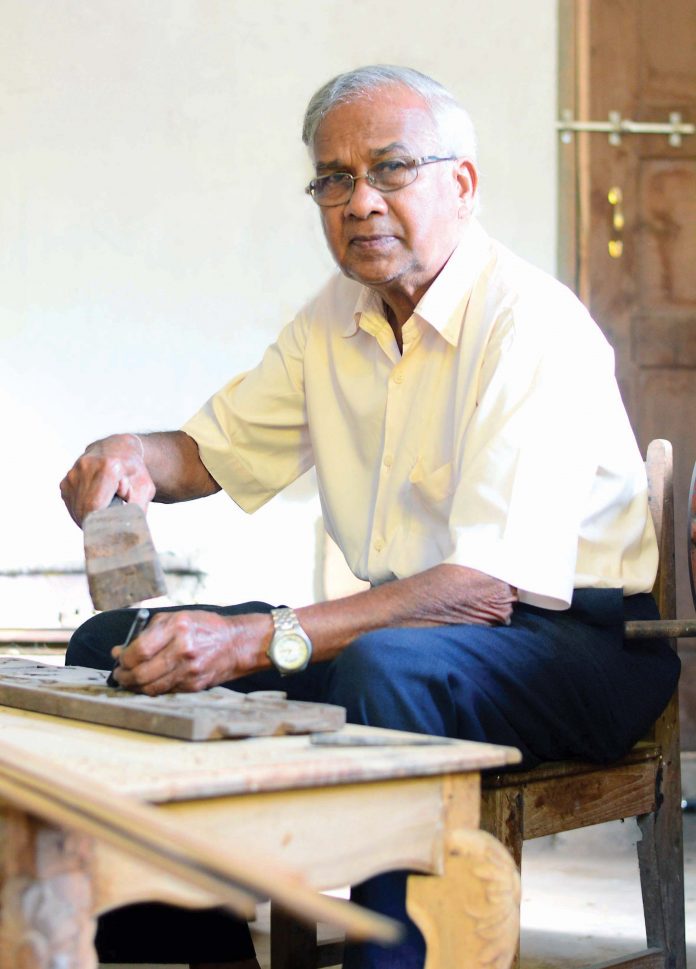 Even at 78, Sitaram alias Mohan Vasudev Palyekar is among the few skilled Goan carpenters who still continues his trade at his workshop in Guirim

When we reached Guirim, Sitaram alias Mohan Vasudev Palyekar was waiting for us in his balcony. It wasn’t his eagerness to be featured on the daily that had him waiting, but his excitement to narrate the story of how this young boy who grew up in the Portuguese era, was taught carpentry and wood carving, and how he ended up becoming the sought-after carpenter in the state.

“Now there is an influx of carpenters from outside Goa who get most of the work orders here. A lot of people don’t want to spend a lot on furniture and don’t have an idea of wood carving, and antiques,” Palyekar tells us, while he shows us around the furniture he has carved with his own hands.

Narrating his initiation into this field, Palyekar recalls that carpentry was taught nearby in Gurim during the Portuguese era. “But, I couldn’t enroll myself there as I could not afford to pay the fees. Then later a few of us were taught wood carving but we had to compulsorily learn Portuguese for an hour, and that was a chance I couldn’t miss,” he chuckles.

Post Goa’s Liberation, he and another friend who was into metal work got a call from Bombay (Mumbai) for full-fledged six-month courses. With a stipend of `80 a month he learned and grasped all that he could to emerge as the topper.

He then joined the Goa Government and worked for 15 years with Provedoria before being transferred to the Mines and Industries Department.

“I got a lot of exposure, and appreciation for my work here. Besides, the best part was that each year 20 students would be trained and there was so much joy to pass on this skill to Goans at that time,” he says.

Today at the Palyekar Woodcraft workshop, he spends a few hours guiding workers and doing some easy work he can. “I have aged now, but I still have a lot of ideas that I want to work on,” he shares.

He then interrupts the conversation to show us a few of his masterpieces including a hand carved intricate casket that replicates the one that has the relics of St Francis Xavier. Another work he displayed was a beautiful jewellery box. “This one I used to make after coming back from work, so I can’t really put hours to this piece,” he says, but adds that these boxes were used during the Portuguese days. A lot of girls from elite families who got married during that time would make sure they had such a piece which came with a key.

“I miss doing wood carving as I love to pay attention to detail and the finishing. Today, the demand has dipped so we do modern and traditional woodwork and one of my son’s is helping me take my trade further despite having his own job,” he says.

It’s not an easy job to be a carpenter; there’s a lot of time, patience, and effort needed. And today people are fussy and crib when it comes to paying for labour, he tells us. But, he adds, he still has a lot of people who have known him and his work through the years and they still come knocking on his door, and he can’t say no to them.

“When I worked with the government everybody wanted furniture done by me. From a Chief Justice of Bombay, whose name I can’t recall, to the governors who came and went that time, my dining sets were a favourite,” he recalls emotionally.

He says with pride that there was no one who didn’t like or appreciate his work. His furniture today, he tells us, has been shipped to Portugal and has been sold at the India International Trade Fair that would take place in Goa and in Delhi.

“There were more carpenters who worked along with me and many others in other departments too, but I guess I had an upper hand because of my finishing skills,” he says.

Today, he says, Goans and those who have made Goa their home, believe in minimalistic furniture, but carving is a speciality and will soon become redundant. He hopes that people will understand the art and skill and purchase such furniture that remains and tells a story of a carpenter who’s worked on it while making a statement at home.

“For me, teakwood and rosewood are the best for carving. I can visualise my drawings and I worked with that wood all my life,” he says, adding that while other options flood the market, he still favours teak and rose, though pretty expensive.

In 2018, the Department of Art and Culture awarded him Kala Gaurav Puraskar, for his excellence in Woodcraft. He looks at the award and certificate and gets emotional while he says: “I got this late in life, but all through my life as a carpenter I was appreciated and my work made people happy. That used to be my awards and certificates that kept me going, and will for as long as I can.”