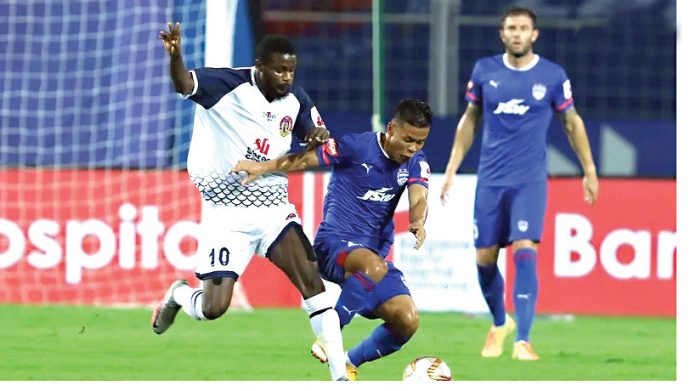 East Bengal picked up crucial three points as they edged out Bengaluru FC in an Indian Super League (ISL) clash on Saturday at the Fatorda Stadium.

Matti Steinmann scored the only goal of the night in the 20th minute to seal the win for the Red and Golds. The Kolkata club end the first phase of the league with 10 points from as many games and remained on the 10th position in the league table.

Bengaluru FC tried hard in the second half but big saves from Debjit Majumder denied them after SC East Bengal dominated them in the first half. The second half was more even but Bengaluru still lacked sting in the final third and Debjit made some huge saves to get the win for his team.

Bengaluru FC coach Naushad Moosa after the game: “It’s not been easy for me. It was all of a sudden and we knew the relationship we had with Carles, it wasn’t easy for us. For all the players, I had to really sit with everyone and talk to them. The players made me feel comfortable and showed me they are professional and here to play football.

“Three sleepless nights, it’s not been easy for me. I was confident that we can bounce back. Unlucky goal but the way we played today, we can get back. Even East Bengal, they have been on top, and they were also desperate for the victory. I am sure we will come back and give a positive performance in the next match.

“I want to rely on the youth now. The way Parag played in the first game, it was unlucky he got injured. Bhutia, Amay, they were nervous but it was their first game. I do want to give them more time. We still have 10 games to go and it’s not over for us.”