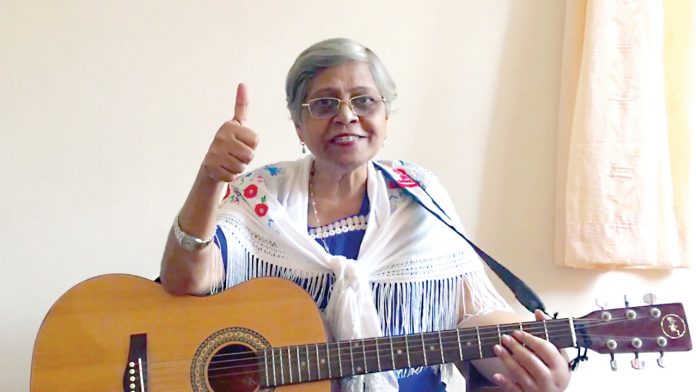 A Goan friend finds it amusing when I still refer to my home turf situated at the beginning of the urban sprawl of today’s Panaji as a vaddó. In popular imagination one uses the term ‘vaddó’ in our villages, not in our towns and cities. But despite the quantum increase in traffic even in our by-lanes, the non-existent parking, and tourists milling about gawking at us and peeking into our windows and doorways as if we were part of some pageant on display, our São Tomé vaddó (touch wood!) still has a cozy intimate vibe, where “everybody knows your name”.

And certainly everybody in the vaddó (and much beyond) knew and loved Eutemia (“Bishu”) Fernandes. She was a fixture that almost epitomised our vaddó, and especially the life in our little chapel.

I’ve known the Fernandes family for so long that it’s difficult to pinpoint since when. But I think it must have been sometime in the 1980s that I got roped into singing and playing my violin for her brother Elias, former lead guitarist of the most popular band (‘Foremost’) who then focused his formidable musical talent in the service and praise of God. So many happy memories tend to blur together, but the Christmas Midnight Mass, Holy Week and Easter services, and the staging of a musical, ‘The Prodigal Son’ at the Kala Academy stand out in my memory.

After Elias left for the UK, Bishu took over the reins of the choir, and I had an even longer innings under her direction, even though I was by then in the later years of medical college and then working as a doctor in Goa Medical College and later in private practice. The music-making was a welcome diversion from work, although my on-call schedules meant I couldn’t make it to all rehearsals or engagements.

Except for Don Bosco rehearsals, most of the time we met in the living room of the Fernandes home along São Tomé road. There have been so many tributes pouring in within hours after the news broke of Bishu’s passing in the morning hours of January 2. But I could see that I’m not alone in treasuring so many fond memories of the fun-filled hours spent in that space, the music-making, the bonhomie and volcanic eruptions of laughter at the slightest excuse during rehearsal breaks.

The picture accompanying this column is how I’d like to remember Bishu by. It captures her essence so well. It’s a classic Bishu stance whether introducing a new hymn, carol or song to us at rehearsal or leading us in performance. The thumbs-up is another hallmark. She’d always be encouraging us with such gestures or words of appreciation, and a smile.

There is a tradition that used to be very much alive in the 1970s but then began to die out: the birthday serenade. On the evening of your birthday (or sometimes the night before, close to midnight), friends would sing at your door to the accompaniment of guitars and violins. Members of Bishu’s choir that lived in the area got enthusiastic birthday serenades. The logistics of contemporary life make it impractical to co-ordinate these days, but they’re part of the many beautiful memories I have of Bishu, guitar slung around her neck and leading us on these impromptu sing-sessions.

The good times spilled over outside of rehearsals too. Like so many of you, I have so many lovely memories of going out as a group, carolling, or to meals or a show or dance. Someone in her tribute to Bishu mentioned the cha-cha-cha. Whenever we were at a dance or wedding, I would particularly love to pick her up for the cha-cha-cha. She knew so many variations on the basic step, and I learned many moves from her.

After I returned to Goa in 2008 after a decade away, I got pre-occupied with relocating back here with transfer of residence, the birth of our son and the birth of Child’s Play. So apart from one or two occasions where I sang or played in her choir for a family occasion, it was difficult for me to involve myself as much as before.

As many of you know, Bishu fought a long and arduous battle against cancer. But this is precisely when her faith in God shone even more brightly. Whenever we met, I was struck by her stoicism and the calm and bravery with which she faced what must have been extremely painful, physically and emotionally. I don’t recollect her ever uttering a word of self-pity or bemoaning her fate.

Some of my atheist doctor friends who pooh-pooh the steadfast faith of the believer would do well to see from Bishu’s example how much solace and strength to carry on despite everything can be derived from it. Faith can be medicinal too, just as much as, if not more than a doctor’s bag of tricks.

This awful lockdown has meant that I saw very little of Bishu for most 2020. But when I heard she had taken ill, I passed by a few times but no one was home. Then, the day after Christmas, I took our son to see the chapel crib, but on a whim, instead of returning straight home, took an impulsive detour into the vaddó, and found her at home. She was pale, weak but extremely peaceful and calm. Little did I realise then that I wouldn’t see her again, and that she’d be gone exactly a week later.

I don’t lay claim to knowing Bishu as well as so many of you who were even closer to her. But she touched my life just as profoundly, and I mourn her loss just as much.

I’ve been trawling the internet trying to find audio clips of Bishu’s singing with no luck. But I can still in my mind’s ear hear her singing so sweetly and her gentle voice as if she were still here. I hope I can retain that aural recollection for as long as possible.

Bishu’s whole life was one long joyous paean to the glory of God. It may be a cliché to say this, but I can just picture her somewhere up there in the heavens, lending her voice and guitar to the celestial choir of angels.

Vaya con Dios (Go with God), Bishu. God was with you all the way during your time on Earth, and He is with you in the next life too.

The winning benefits of vegan