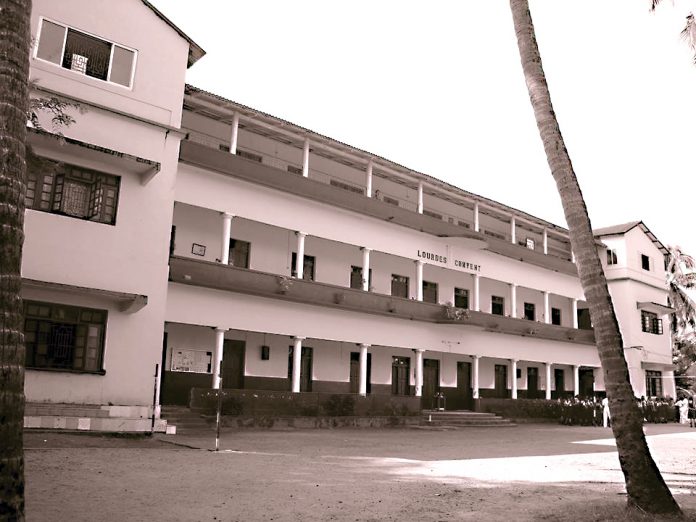 It was then a village in full bloom. Our school was, naturally, right in the heart of that garden. Talent was returning back home. This was the Goa of the late 1960s and early 1970s. Suddenly, there was confidence enough to stage musical-plays like Snow White and The Seven Dwarfs even in a village school.

Our cub-scout troop was also active and lively. Sister Pushpa FMCK showed us eager beaver pre-teens that a whole new world existed out there. Our uniforms sat proud on our young minds. A day-long trek to a spot near the isolated Aguada church made us encounter both nature and history, while we struggled to prepare smoked tea for ourselves!

The big girls staged plays which everyone still talks about, like Pearl The Fisher Maiden. One chilly evening, ‘Sir’ Edwin Saldanha stunned the lot of us by setting the girl guide-cub scout campfire ablaze by pushing into it a stick that ignited the gun-powder concealed in it. Saldanha and his family had then recently returned from Africa.

Growing up in Saligao in the seventies meant encountering what seemed like strange and wondrous times. Maybe we all tend to romanticise the period of our youth; but will such times ever come back to our children’s minds?

In the Goa of the times, Portuguese rule had suddenly ended; but it was just a decade-and-half gone.  Today, it seems the significance of being around then had largely missed our youthful minds. Idi Amin and the other African independence movements ensured the return of a large expat population back home. It uprooted a large number of Goans settled there; but it was a mixed blessing. That, in itself, had led to a great deal of vibrancy in our village. As it surely did in other villages of coastal-Goa which tend to be more migration-prone. Never mind that the next generation of Africanders’ children left to migrate to Canada or Australia by the 1980s.

Many had returned home to post-1961 Goa, expecting much from their state. Others had finished careers in different parts of India, and were returning back. It was a strict and talented teacher Quennie D’Souza, whose husband Colonel Edwin had retired from the Indian Army and set up his dentistry practice in the village itself.

Our village school grew smartly. It was one of the crop of English-medium schools that the Portuguese – perhaps reluctantly – allowed to come up in the 1940s. This year, this school and perhaps others too would have celebrated its platinum jubilee, had it not been for the pandemic.

My first memories of Lourdes Convent were of the kindly nuns who were at the helm of the institution.  Sister Veronica, pale and grey-haired, was a grandmother-figure to many of us. As far as I could recall, she never had to utter a rude word or shout at anybody, but managed to make her point in the most polite of tones.

Sr Livinia struck one as being more strict but also had a sporting side to her. Another sister, Sr Blandina, would take part in sports while wearing her red-striped white sari. Sister Isabel looked after the kitchen and supplies, which fed scores or maybe a couple of hundred boarders. In those times, many parents opted to place their children in the boardings.

Joining school, we arrived late into the academic year. I was just three, and had the dubious distinction of failing in three subjects in nursery itself. But one can’t recall teachers being unnecessarily strict, or pushing us into taking a dislike for our studies.

Our teachers – all ladies, as this was a girl’s school which then allowed boys only up to middle-school – are still etched large on my mind.

One would encourage us to buy the four-page ‘Saligao Bulletin’, published by an elderly villager, and then sold for just 15 naya paise.  Another stately lady would remember me as her student till well into her 80s, whenever she saw something in print with a by-line. I recall another bringing a clock into class three to teach us to read the time.

The names of these teachers would not mean much to most readers. But, when I shared some mentions with an online alumni network, other ex-students quite strongly echoed the sentiments. They too recalled them, with much the same gratitude.

Some teachers taught one set of students, and then went on to teach their students’ children. For some reason, our years at our village school remains written strongest on one’s mind. After that, we spent shorter stints in the boys’ school, higher secondary and college, before moving into the world of work.  Those latter memories seem like a blur, with life moving in fast-forward. We must thank our teachers for those times, and above all for shaping us.

It’s only as we grow older that we appreciate the role played by our early teachers, educators and schools in shaping us. But, except for ritualistic celebrations around September 5, Teachers’ Day, the contribution of this section is forgotten for much of the year.

Today, despite the communication possibilities, very few schools in Goa have active alumni networks. In a situation where the government grants cover only the minimum required to run a school, mainly salaries and little else, such networks could help take our schools to a new level. To attain more.

But few students who gained from these institutions seem to wish to do anything that could build such networks. For their part, the schools are too busy with the daily administration, or do not understand how an alumni network could be effectively built. Some schools have built such networks, a few.

Surely, the bulk of those who went to a school in Goa would appreciate the contribution made by the people and institutions. Even humble and modest schools have, often, put in valiant work to give their students the best.

A platinum jubilee interrupted by a pandemic is an excuse to spare a thought for our schools.