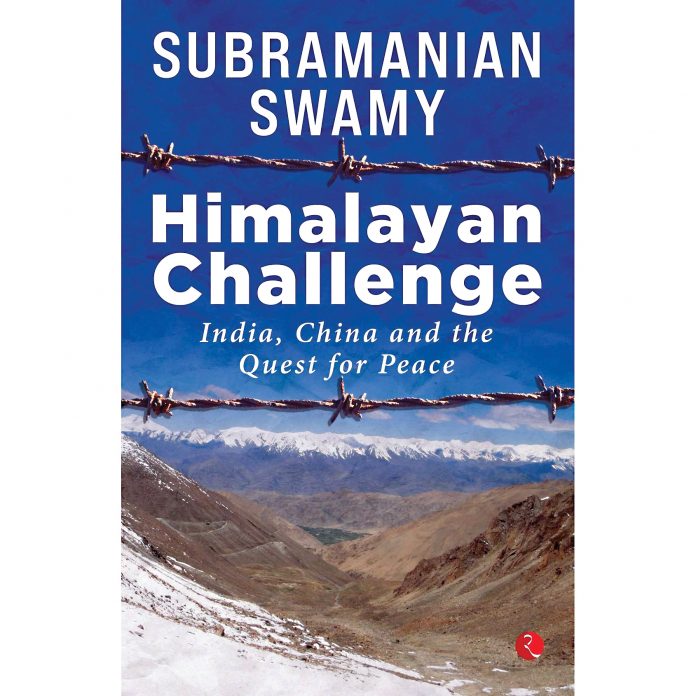 Nothing intrinsic stands in the way of India and China having friendly relations and should they be able to recalibrate their ties, this new compact would have multidimensional possibilities, including joint patrolling of the Malacca Straits through which 75 per cent of the world’s commercial sea traffic passes, says a new book by economist-author Subramanian Swamy.

But for this to happen, there has to be a major change in the mindset in the Indian establishment to build a national consensus on the issue and look beyond photo opportunities and other such nuances, Swamy writes in Himalayan Challenge – India, China and the Quest for Peace.

“Our mutual interactive history shows that nothing innate or intrinsic stands in the way of India and China having friendly relations, with equal respect. In my view, China would not regard the border dispute as an obstacle worthy of prior removal if there was a strategic partnership with India based on matching defence hardware and cogent foreign policy.

Nor is rivalry the reason, since there are hardly any international issues in which India and China have irresolvable fundamental conflicts of interest. Issues of conflict have been the outcome of compulsions of unstructured thinking, such as China’s view that the ‘1962 debacle’ can be repeated and India’s conviction that China is expansionist. Therefore, we must concern ourselves with the national security imperatives that necessitate developing stable India–China relations,” Swamy writes.

A nation’s foreign policy, he writes, “is not based on interpersonal etiquette or attractive photo ops between leaders of nations” but has to be structured on a substantive basis with a clear statement of a nation’s objectives, its priorities, strategy and resource mobilization consistent with its economic power and past history.

This will enable a nation “to maximize its geostrategic advantage by both transparent as well as covert initiatives. In addition, nations need to continually search for fresh options to foster national security. A nation’s defence capability is based on adequate hardware of weapons and economic sustainability. Its foreign policy is based on other nations’ intentions, which in turn, are based on the software of international alliances and common ideology on peacekeeping,” Swamy maintains.

Thus, the fulcrum of “redesigning our global foreign policy is balanced on mature India–China relations. However, a fundamental problem in policy-making towards China is that there is no clear or apparent consensus in India on the objectives of engagement with China.”

“The domestic strategic discourse so far has also failed to come up with a clear criterion for evaluating the ‘means to be adopted’ in this regard. Even if India had defined objectives, there must also be a set of priorities, a strategy in place to achieve those objectives, as well as a financial and institutional architecture to sustain that achievement,” Swamy writes.

Therefore, Indian leaders “have to decode the nuances of the Chinese expressions and reactions, and not be deluded by atmospherics, as we have seen. This is the lesson of 2020 from the 18 one-to-one meetings between PM Modi and President Xi Jinping”.

“This basic strategic understanding and a sense of history have eluded the comprehension of China-baiters in India, most of whom, unfortunately, exercise influence in policy-making. Much of this baiting is encouraged by those nations that are apprehensive of the influence of an India–China understanding, if ever, on global politics,” the book states.

“It is now time to cut through the barriers and begin by seeing the importance of China for India, and understand the reality of the present unequal economic and military endowment; and see this with clarity, and in a perspective based on cold analysis.”

Given the strategic realignment of forces in Asia, India should reconfigure and recast its relationship with China. An induced Sino-Indian proper understanding would dramatically change the strategic and economic map of Asia. “India, thus, has to define its perspective on China with clarity and transparency: does India want a compact with China in the twenty-first century (Option A), or does India want to participate in the growing prospect to contain China with the US or Russia (Option B)? The choice can be made once we Indians demonstrate on the ground that we can defend and impose heavy costs against China on our own strengths and military preparedness,” Swamy maintains.

His conclusion, from cultural, historical and strategic perspectives is that the “maximum and stable strategic gains to India in the twenty-first century obtained in Option A. However, clearly a trade-off between China’s relations with Pakistan and India’s transparency in Tibet are the cornerstones of that structuring of policy. What Indian security needs today is moderated, normal (but not intimate) Sino-Pakistan relations, for which India has to offer a transparent commitment to respect China’s interest in its own autonomous province of Tibet as a trade-off”.

Rather than paint it as a clear and present danger, or a new-found ally, India needs to take the “middle path” in its interaction with China.

“This new policy should be grounded in pragmatism, not out of fear or overreaction. It should be derived from Indian and not Western assessments of China’s strategic calculus, priorities and propensities, and India’s position in that calculation. Accordingly, once India’s national interests are defined vis-a-vis China, the tasks for the foreign policy establishment become clear. They can contribute both to formulating the Indian response as well as to implementing the resultant strategy,” the author states.

However, for such a compact to come within the realm of possibilities requires a change in the mindset of the Chinese and Indian leadership, and a washing off of the 1962 hangover. In particular, the new mindset would make future Indian leaders recognize that Pakistan, despite its nuclear capability, is not in India’s league, and for China to recognise that India is very much in China’s league and that it is no more possible for China to “teach any lesson” to India, without itself coming to grief, Swamy writes.

This Indian commitment has value for China’s strategic calculations, especially in the context of its recent growing vulnerability to Islamic fundamentalism in the Xinjiang province. “It is, however, not as simple as that, since China values Pakistan as a reliable conduit to West Asia and even to the US. However, even there, the evolving relations between Israel and China may reduce Pakistan’s importance as a gateway to the US. Nevertheless, a modern non-Talibanized Pakistani state would still be an invaluable asset to Beijing in the Arab world, unless Pakistan crumbles to the Talibanization onslaught, which is not a remote possibility,” Swamy writes.

“It must be stressed that just as India wishes to be liberated from ignominious comparisons with Pakistan, it needs to better calibrate its relations with China, freeing it from odious and sterile comparisons of arithmetic parity. Only then will India be able to play a larger role in Asian affairs, in a compact with China.

“Such a compact would thus have multidimensional possibilities, including a joint supervision of the Malacca Straits, which would control nearly 75 per cent of the world’s commercial sea traffic,” Swamy maintains.

However, this is not an easy task, although it is not impossible either.

“It depends on the astuteness of leadership on both sides of the Himalayan mountain range. However, if China wishes to continue to be obstinate, the same Malacca Straits with an India-Indonesia alliance can strangulate Chinese foreign trade. The onus today is on China, but it also requires a little diplomatic finesse from India, backed by a modernized armed force,” Swamy points out.

“For the moment, leaving aside the other possible positive gains from an India–China friendship, such as in the UN, in bilateral trade, etc, immutable strategic facts make it imperative that any Indian government ought, in the national interest, to strive for India–China rapprochement without being carried away by peripheral issues and wallow in spin dished out by the media.

“Global peace will be greatly facilitated if China and India cease hostilities, since it will end in a stalemate for China. Working together has a more fruitful and productive endgame,” Swamy concludes.