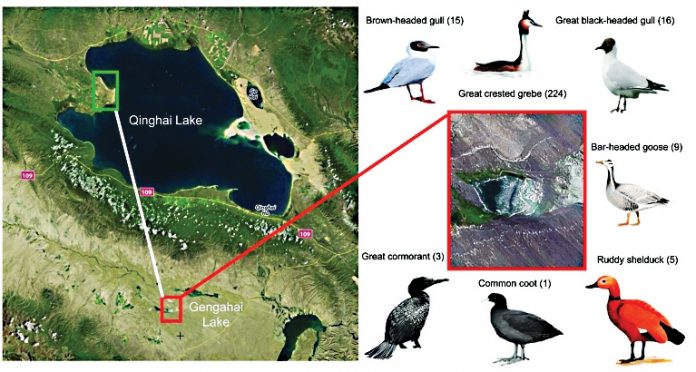 Bird flu is back in India. Do not go to any location visited by migratory birds for a few weeks.

Thousands of bar-headed geese, visiting Pong Dam Lake in Himachal Pradesh were found dead. The culprit was H5N1 virus – which causes bird flu or avian influenza. Bar-headed goose fly to India from Central Asia and Russia but mainly they arrive in India from China. They use specific migratory routes like the Central Asian Flyway which covers most of the Indian sub-continent and provides winter home for 90 per cent of migratory birds which fly by this route. Another strain avian influenza subtype H5N8 was found to be killing crows in Rajasthan and Madhya Pradesh. In Kerala, 20,000 ducks died in Alapuzha and Kottayam districts. In Haryana, four lakh chickens died. Among the lethal strains which cause pneumonia-N1, N2, N5, N6 and N9 are most dangerous. Humans are susceptible to N1.

Not much attention has been paid in India towards the association of migratory birds with viruses. More than 370 species of migratory birds use three different migratory routes to visit India. We don’t know much about the viral load these species carry with them when they arrive in India.

This article was prompted by the outbreak of bird flu virus in India last week. Himachal Pradesh, Kerala, Rajasthan, Madhya Pradesh, and Gujarat are on high alert. Scientists are worried about the role of wild migratory birds in dispersal of various pathogens. A paper by Reed et al in 2003 had warned that “wild birds are known to be reservoirs for several of these agents, including arboviruses such as West Nile virus (WNV), Borrelia burgdorferi, influenza A virus, enteric bacterial pathogens, and drug-resistant bacteria. In addition, wild birds can be infested by arthropod vectors, which can drop off and disperse pathogens along migration routes, even if the avian host is not a competent reservoir of infection.”

It has been found that migratory birds can spread Alkhurma Hemorrhagic Fever virus (AHF virus) closely related to Kyasnur Forest Disease Virus- KFDV. During the COVID-19 pandemic, scientists became interested in coronaviruses spread by the migratory birds. In September 2020 Mijanaur Rehaman and four other from Bangladesh published a paper- ‘Coronaviruses in wild birds – A potential and suitable vector for global distribution’ in which they mentioned: “Birds are natural pools for supplying viral genes during the development of new species and viruses for interspecies transmission. These warm-blooded vertebrates show high species biodiversity, perching and migratory conduct, ability to fly long distances and possession of a remarkably versatile immune system, which are ideal qualities for asymptomatic shedding, dispersal and blending of various viruses for the development of novel mutant, recombinant or reassortant RNA viruses.

Their review concluded: “globally, coronaviruses are widespread in several species of wild birds. The data on their prevalence in wild birds across the world are scarce. Wild bird species of certain countries or locations are linked by one or more bird migration routes, which may encourage the spreading of native coronaviruses to the global wild bird and other animal populations. Moreover, interspecies transmission poses a great risk for spreading, mutation and the emergence of new strains of the viruses. To recognise their contribution to evolving novel viruses and zoonotic diseases, region-specific and outcome-based studies need to be conducted immediately with continuous surveillance of wild birds.”

Within few months of the publication of this paper we have bird flu or avian influenza the highly contagious viral infection among birds. It is caused by Influenza Type A viruses. The strain known as H5N1 in 1997 became the first avian influenza virus to infect humans in Hong Kong. It infected those associated with poultry business. H5N1 is transmitted to humans through the contact with infected birds’ faeces, nasal secretions, or secretions from the mouth or eyes. Touching contaminated surfaces can spread the disease. Birds infected with H5N1 continue to release the virus through faeces and saliva for as long as 10 days.

A 2007 study had ruled out long distance spread of bird flu virus by the migratory birds because the prolonged, intense exercise leads to immunosuppression and that migratory performance is negatively affected by infections. However according to a recent European Food Safety Authority report H5N1 and H5N8 were two of three subtypes found in Europe in wild birds and these strains were found to have spread from Asia to west-central Europe, suggesting a “persistent circulation of this virus strain, likely in wild birds in Asia”. The death of more than 3400 migratory at the Himachal Pradesh’s Pong Wildlife Sanctuary in Kangra District has shown after autopsy and viral identification that it was caused by H51N1 strain. From where and when these wild birds caught the infection? It is not a coincidence that these geese breed in Qinghai Lake in northern China. They fly across Tibet and the Himalayas. Incidentally in May 2005, H5N1 the original strain of this highly pathogenic avian influenza had caused a disease outbreak in wild birds in the Qinghai Lake region of the People’s Republic of China and then it spread to Asia to Europe and Africa. So it is highly possible that the geese were already infected and died after landing at Pong Dam Lake.

What would a small state like Goa do if dead migratory birds or crows are found in the coming days?