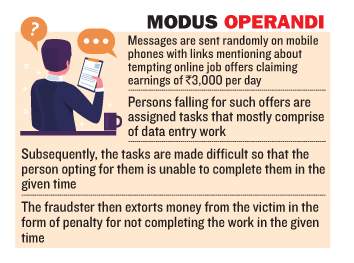 Under the garb of providing online employment, cybercriminals are now trying to cash in on the ‘work from home’ model.

Explaining the modus operandi, police said that scamsters randomly send messages to mobile phone users telling them about part time/full time jobs (work from home) that can be done by using a computer or a mobile phone.

They entice their victims by mentioning that the job involves no registration fee and that the earnings could reach Rs 3,000 per day, which is enough to tempt a person, police said. However, a few days after commencing the work, the task is made so complicated that the person opting for the ‘job’ finds it impossible to complete the work in the given time. Subsequently, the fraudster threatens the person by sending a legal notice for not completing the work and asks the victim to pay a penalty.

Cybercrime police inspector Vishwesh Karpe has urged the public not to fall prey to such frauds.

“The offers the online scamsters provide look lucrative but they are nothing but a scam. Be cautious while opting for such kinds of lucrative online work from home job offers,” said Karpe.

A couple of such incidents have come to light after victims approached the cybercrime police for help. “The fraudsters were trying to extort money by threatening the victims with a legal notice,” said Karpe.

Police said that if one deposits money, the fraudsters will demand more and more. Referring to the modus operandi, the police said that mobile phone users are asked by the fraudsters to click the link sent in the message and register by providing their details and accepting the terms and conditions.

Following this, the person falling for such an offer is assigned a task, which mostly comprises data entry work. However, later on, the person discovers that the task given is such that one cannot complete it within the given time. Police said that it is not possible for a person to meet the deadline and as such, the fraudster starts deducting money earned by the person through the work completed initially.

Police further said that later the fraudster asks the person to pay a penalty for not completing the work in the given time failing which a legal notice is sent. Police said the fraudsters are trying to create fear so as to extort money from gullible people through such cybercrimes.