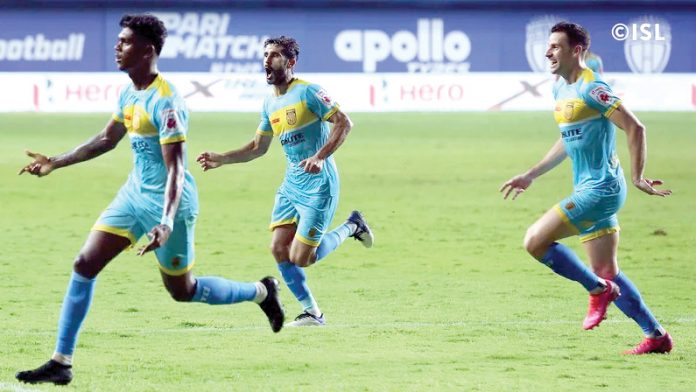 Hyderabad took the lead through goals from Aridane Santana (3’) and Joel Chianese (36’) before a penalty from Federico Gallego (45’) and Benjamin Lambot’s strike (45’) helped NEUFC draw parity before the break.

Hyderabad settled the tie in their favour in the second half through late goals from substitute Liston Colaco (85’, 90’).

The first half was a dramatic and open-ended contest with both sides creating ample chances. The Highlanders fashioned more opportunities and despite a two-goal deficit, fought their way back with two goals late in the opening half.

Both sides continued to test each other after the break with Chowdhury pulling off crucial saves early on in the second half.

The Nizams brought on Colaco after the hour mark and he would go on to have a major influence on the game, notching up a brace.

His first goal was sublime. Receiving the ball on the left, the Goan forward beat three markers before curling his shot into the top corner. Colaco then added a second one with a neat finish after being assisted by Santana.

The result propelled Hyderabad to third in the ISL table, level on points with FC Goa.