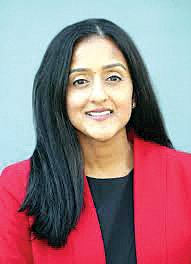 Washington: US President-elect Joe Biden on Thursday nominated Indian-American Vanita Gupta to be the associate attorney general and roped in Judge Merrick Garland for the position of attorney general.

“Our first-rate nominees to lead the Justice Department are eminently qualified, embody character and judgment that is beyond reproach, and have devoted their careers to serving the American people with honor and integrity,” Biden said.

Gupta, 46, is currently serving as President and CEO of the Leadership Conference on Civil and Human Rights. If confirmed by the US Senate, Gupta would be the highest ranking Indian-American in the Department of Justice.

rights attorneys in America, Gupta would be the first woman of colour to serve in this role.

She has spent her career fighting successfully for greater equity in our justice system and advancing the rights and dignity of every American, Biden’s transition said.

Gupta served as acting assistant attorney general for the Civil Rights Division — the chief civil rights prosecutor for the United States. She is a successful consensus builder on tough issues, with years of experience on managing complex settlements and advocacy experience.