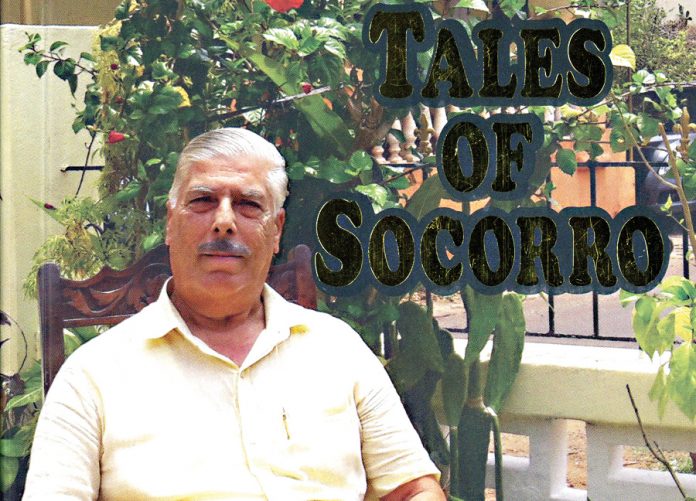 Having already written 11 books, with ‘Tales of Socorro’ Edward de Lima has made his debut into fiction. The book, says Lima, is his humble effort to document the lifestyle of the simple, rural, God-fearing community of Socorro which embraced Christianity in the 16th century after breaking away from the Parushuram ancestry. The stories also describe the life of Hindus residing in the village.

After retiring as professor and Head of Department of English of DM’s College of Arts, Science & Commerce, Assagao , Lima has since devoted his time to research and writing and has come out with books on Goan history and Konkani.

His latest, ‘Tales of Socorro’ consists of 20 short stories based on real life incidents concerning some of the villagers who lived in Socorro about 50 or 60 years ago.  The stories were written at different periods and some of them have previously been published in magazines over the years. Most of the stories are true happenings narrated to him by his grandparents and elders of the vaddo. “They are not completely fictitious. Some of the names of the characters are changed deliberately to avoid recognition by those families who are surviving so as not to create any bad blood. But some characters with whom I had an interesting relationship during my childhood bear their real names in order to make these persons immortal. In fact, I have been trawling through childhood experiences and narratives,” he says.

“As one reads the stories they will see that sometimes truth is stranger than fiction,” he says, adding that many people who have read the book have evinced great interest in some of the characters and happenings of the past.

Through this book, which he began two years ago, readers will get a glimpse of the simple life of the rural folks before tarred roads, electrification, piped water and modern means of communication arrived bringing in its wake a sea change in their lives.

The tales, he says, cannot be described as great literature but will certainly provide an account of the socio-cultural history of Socorro to the readers of the new generation. “All youngsters who had not seen this life in Goan villages before Liberation and soon after will be interested to know about the socio -cultural life of those days both Catholics as well as Hindus,” he says. “They will also learn about the way of life of the people before the arrival of modern amenities.”

Edited by former Head of Department of English, Goa University, A K Joshi, the book is available at Singbal Book House and Paulin Media Centre in Panaji and Golden Heart Emporium and the Light House in Margao.

The sounds from the screen

The power of non-violence decoded