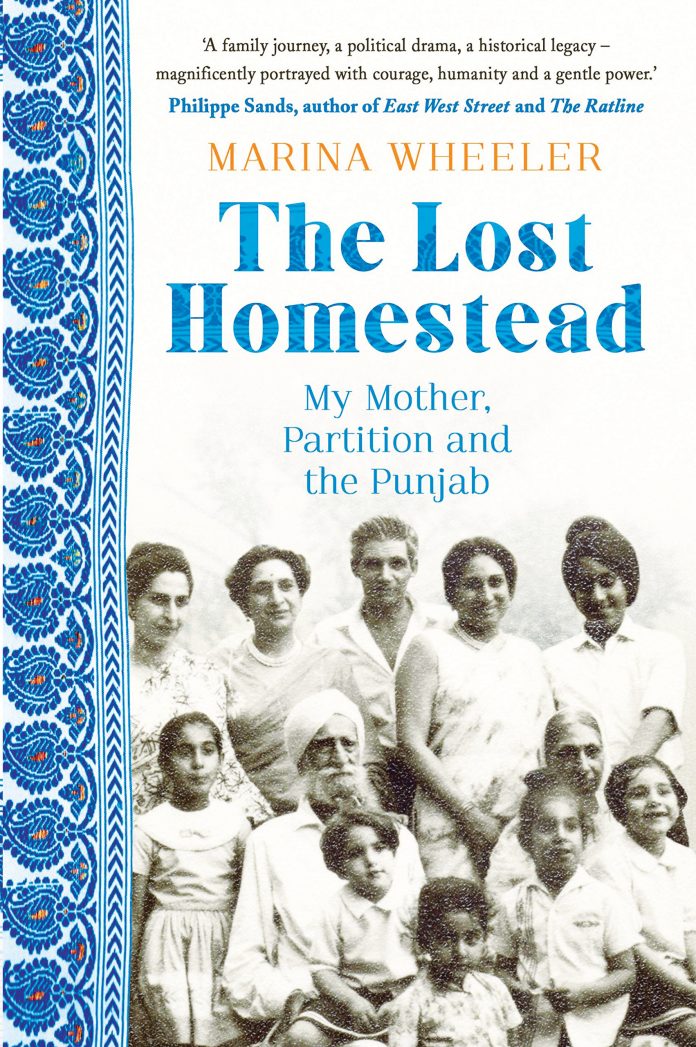 A film on India’s last viceroy triggered a series of journeys to the sub-continent as Marina Wheeler attempted to come to terms with its partition in 1947 and the trauma that it caused to her mother. In this she succeeded admirably but could be treading on thin ice when it comes to what exactly caused the upheaval.

“You are right that Partition was a traumatic event for our family (and indeed many others, including your own). My mother did not speak of it as a young woman, as her father had decreed that none of the family were to do so. After leaving India with my father, I feel the pain and sorrow of it was parceled away, along with the sadness of this ‘second displacement’, as she put it,” but the story nonetheless had to be told, Wheeler, a London-based barrister and ex-wife of British Prime Minister Boris Johnson, told IANS in an interview of her book ‘The Lost Homestead’.

Her search led to six trips to India and two to Pakistan over two years.

“Yes, my journey was cathartic and brought some peace to us both. Talking to me and reading my text, I feel, helped my mother to come to terms with what had happened. It also helped me understand her better, which was a wonderful thing, at the end of her life,” Wheeler added.

“By November 2017, when I set off on my travels, the story had begun to take shape,” Wheeler writes in the book, which is subtitled “My Mother, Partition and the Punjab”.

“I could see two parallel stories I wanted to tell. Two stories of freedom. One of India’s, its fight for political freedom, for self-determination and its people’s right to govern themselves. The second was my mother’s, her quest for personal freedom, for autonomy and the ability to decide her own future,” Wheeler writes.

Over the course of these two years, her mother Dip (Deep), “spoke more openly about Nehru than about personal matters. Often she left me to read between the lines, into the gaps and the silences. She invited me to interpret, which I have faithfully done”.

“I filled in the picture with the writing of others. Wonderful books – by journalists, or scholarly works with footnotes, the product of years of research. I also read novels and attended lectures and literary festivals. I met people, knowledgeable generous people, who guided me on,” Wheeler writes.

So far so good.

As British India descended into chaos with its division into two countries announced , the violence and civil unrest escalated for months. With millions of others, Wheeler’s mother Dip and her Sikh family were forced to flee their home in Pakistan.

Wheeler weaves her mother’s story of loss and new beginnings, personal and political freedom, into the broader, still debated, history of the region. The book follows Dip when she marries Marina’s English father Charles Wheeler of the BBC and leaves India for good (the second displacement) for Berlin, then a divided city, and on to Washington DC, where the fight for civil rights embraced the ideals of
Mahatma Gandhi.

Where, however, the book falters is on the very act of partition.

Having begun with Gurinder Chadha’s film “Viceroy’s House”, Wheeler writes that aside from “quibbles about acting and plot”, she was “troubled by something more serious: how the film dealt with the foundational, historical question: Why partition? The answer, it claimed, was that, unbeknown to Lord Mountbatten, the outgoing Viceroy, Britain had a secret plan to partition the country, to secure oil supplies and advance its own geopolitical interests in the brewing Cold War with Soviet Russia”.

“Really? This didn’t tally with what Dip had told me or anything I’d read (which, at that stage, was not a great deal). But if it wasn’t true, why would the film say that it was? I understand that people can perceive the same events in radically different ways. But allowing for interpretation, judgement and opinion, there is still a place for hard fact. Did any serious historians support a secret plan thesis? I wanted to know,” Wheeler writes.

Admitting that Mountbatten’s role and the decision to partition India, as she discovered while researching the book “remains very contested”, Wheeler said during the interview: “I try, in the book, to stand back and report the areas of dispute and contention, only committing myself to an account where it seemed to have a solid historical base.”

“I didn’t find support for the thesis that the British planned partition early in the century (as some historians contend), indeed the consensus – as I read it – seemed strong that for the British and Indian leaders, partition was an option embraced at the eleventh hour to avert civil war. This was after other options, including the 1946 Cabinet mission plan, had failed to win the required support.

“I am well aware that while I read as extensively as I could, I am not a historian and am committed to keeping an open mind about these (and other!) historical events,”
Wheeler said.

A potential civil war is thus a new element that has been introduced (though the possibility has often been alluded to).

Narendra Singh Sarila, on whose book Chadha’s film is based, does write that “the British favoured partition and worked successfully to achieve it because they did not trust a Congress government to provide a bulwark against Russian incursions into the area, adding that the general view was that “only a strong independent Pakistan could be relied on to protect the Himalayan frontiers and the rich oil fields of the Middle East” – but this just another of the many theories on the issue.

The debate is unending, but let it not detract from the true value of “The Lost Homestead” in recording what might otherwise have been lost to history.