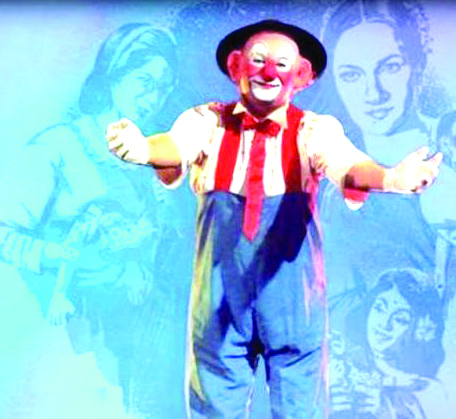 ‘Mera Naam Joker’, the semi-autobiographical magnum opus of the showman of Hindi cinema, Raj Kapoor completes 50 years of its release, this week. NT BUZZ revisits the classic, which was an astounding flop when first released, but gained cult status following the demise of Raj Kapoor in 1988

The ‘showman’ of the Hindi film industry, Raj Kapoor made his Technicolor extravaganza, ‘Mera Naam Joker’ as a comedy, however, destiny ensured that it had all the elements of a perfect Greek tragedy. Released exactly 50 years ago, ‘Mera Naam Joker’ was ‘Love’s Labour’s Lost’ for Raj Kapoor. When the illustrious filmmaker, Guru Dutt made ‘Kaagaz Ke Phool’ (1959), which had strong autobiographic elements, he poured his heart, soul and money into it; however, this first Indian film in CinemaScope crashed and Guru Dutt subsequently never directed a movie. ‘Mera Naam Joker’, which had the showman making a bold attempt to present the complexities of his showbiz life from a circus clown’s eyes, followed the fate of ‘Kaagaz Ke Phool’.

Although ‘Mera Naam Joker’ went on the sets in 1965, its seeds were sown much earlier. Raj Kapoor, after watching a Czechoslovakia State Circus show in Bombay on an early February night in 1960, decided to create an epic about a circus clown named Raju, a character that was an extension of his tramp persona seen in earlier films like ‘Awaara’ (1951) and ‘Shree 420’ (1955). The very next day, he approached his favourite scriptwriter, Khwaja Ahmad Abbas and explained to him that the film “is the story of a tear and a smile. It is the story of a character, the joker, who says, I shall drink your tears and in return make you smile.”

In 1960, Raj Kapoor was busy with the production of his film ‘Jis Desh Mein Ganga Behti Hai’ (1960), written by Arjun Dev Rashk. Naturally, Abbas had some time on his hands, and hence immediately began the work of writing the script of the proposed film. The original script of ‘Mera Naam Joker’ had six chapters, each with a different leading lady. The script was supposed to be made into two different films, with three chapters per film.

On the night of October 24, 1961 – before Raj Kapoor launched ‘Sangam’ (1964) into making – Abbas along with his friend and collaborator, VP Sathe, visited Raj Kapoor at his Raj Cottage, in the RK Studio, and presented the entire script of ‘Mera Naam Joker’. That night, Raj Kapoor cancelled all appointments and gave strict instructions to the studio telephone operator that he was not to be disturbed. The showman, before accepting the leather-bound, two hundred-page-fat volume of the script had a bath, changed, and burned incense before various gods installed in his cottage.

Following this fruitful night, Raj Kapoor immersed himself into the making of ‘Sangam’ and enjoyed unprecedented success after its release. In 1965, just before ‘Mera Naam Joker’ went on the floors, the showman accepted a film called, ‘Bahurupiya’ with Vyjayanthimala as his leading lady. Music composers, Shankar-Jaikishan had recorded a song, ‘Hanskar Hansa, Masti Mein Gaa’ in the voice of Manna Dey for this film being made by Chandulal Shah. The song had even been picturised on Raj Kapoor, but the film eventually got shelved. Ironically, ‘Bahurupia’ also told the story of a clown.

When ‘Mera Naam Joker’ went into production in 1965, Raj Kapoor had just crossed the age of 40. However, he had lost both shape and looks due to his heavy drinking as well as undisciplined lifestyle, and was clearly no longer acceptable as a hero. Nevertheless, the mega-success of ‘Sangam’ ensured that financers stood firmly behind his new project. However, despite this economic backing, the financial demand of ‘Mera Naam Joker’ was huge due to its unlimited budget. This requirement made Raj Kapoor mortgage his house, wife’s jewellery and even the RK Studio.

The script by now underwent many changes… a number of scenes were deleted, new dialogues written, and even childhood school memories of Raj Kapoor incorporated into it. On the casting front young Simi Garewal, a ballerina from Moscow’s Bolshoi Theatre – Ksiena Rabiankina and Padmini from South were signed to play the three female characters – a teacher, a trapeze artiste and a film actress – in the first three chapters of the film. The next three chapters had female characters playing the daughter of a magician, wife of the joker and a teenager falling in love with the ageing joker. Raj Kapoor also selected Rajendra Kumar, Manoj Kumar, Dharmendra and Dara Singh for the film in brief roles, who did not charge any remuneration for their work. This was acknowledged in the titles of the film. The Coup de Maître of the showman was casting his teenage son, Rishi Kapoor as the young Raju. Rishi, who used blue contact lenses to match the colour of his father’s eyes, was the discovery of the decade.

When the actual shooting of the film began, Raj Kapoor initially finished the filming of the third chapter as it needed an indoor/ studio setting. The showman then went on to shoot the second chapter, which needed outdoor locales such as St Paul’s School, Darjeeling and his farm situated at Loni, near Pune. The most difficult part of this film production was however the shooting of the second chapter including the circus. Altogether 20 Russian artistes along with Miss Rabiankina were slated to arrive in Bombay during the summer of 1968, as also Raj Kapoor had made an agreement with the Gemini Circus for shooting many scenes inside its tent.

The arrival of Russian troupe was delayed, which was a boon in disguise as the summer of 1968 was sweltering. The Russian artistes minus Miss Rabiankina finally reached Bombay in December 1968. The Indian winter too was very hot for them, so much so that the animals accompanying the troupe, especially the bears had to be placed in special cubicles set up at the RK Studio, which were surrounded by ice slabs with gigantic fans blowing cool air over them. Even then many animals started losing their hair. When Miss Rabiankina arrived after some days, she suffered food poisoning. The days were fast running out due to which Raj Kapoor decided to work in double shifts. The shooting in the tent of the Gemini Circus would take place during the day, and when the public shows of this circus were held in the evening, the shooting would shift to RK Studio. There were four interpreters always ready on the set to assist the Russian artistes. The Russian troupe completed its work in January 1969 and left for their country.

Music has been the highlight of all Raj Kapoor films and the regular composers of the showman, Shankar-Jaikishan ensured that they gave the best music of their career to ‘Mera Naam Joker’. However, many obstacles were faced by Raj Kapoor during the creation of the music for the film. Lata Mangeshkar, a regular singer for RK Films refused to sing as Raj Kapoor did not agree to give her royalties for the songs. The reason she gave, however, was that the lyrics of the song ‘Ang Lag Jaa Balma’ was obscene. Finally, Asha Bhosle sang the songs. A tragedy struck when Shailendra, the noted lyricist died on December 14, the birthday of Raj Kapoor, in 1966 leaving the theme song, ‘Jeena Yahan Marna Yahan’ incomplete. Raj Kapoor brought Shaily Shailendra, the son of the departed lyricist to complete the same. The showman even used an English song – ‘Wish Me Luck As You Wave Me Goodbye Cheerio’ – that had become popular during World War II, by recording it in the voice of Nitin Mukesh. Altogether 13 songs were recorded for the film with five lyricists writing them, out of which 10 were picturised.

When the shooting was complete, the film was found to have become too melodramatic. Therefore, to salvage the situation Raj Kapoor asked his Parsi make-up man, Sarosh Modi to bring in Adi Marzban, the well-known writer of Parsi stage comedies, to write comedy scenes for ‘Mera Naam Joker’. However, it was too late and was impossible to inject comedy into the already completed footage.

Once the editing of the film began in January 1970, the length of the final cut stood at five hours. Finally, with some editing, ‘Mera Naam Joker’ became a 255-minute-long film with two intervals. It premiered on Friday, December 18, 1970, at the Novelty Cinema in Bombay. When released, the film drew no crowds and bombed at the Box Office. Even a nude scene involving Simi Garewal and a kissing scene between Raj Kapoor and Ksiena Rabiankina could not attract crowds to the theatres. The criticism was directed at the experimental plot and four-hour-plus runtime, as well as Kapoor’s waning charisma as a hero.

The fate of ‘Mera Naam Joker’ left Raj Kapoor shattered. Although a failure, the first chapter of the film, its circus scenes executed by the Soviet performers and the songs were well appreciated. The film won three national awards including one for Rishi Kapoor as the Best Child Artist. The film also won five Filmfare awards, including Best Director trophy for Raj Kapoor, besides in the music, cinematography, sound recording and male playback singing categories. Hrishikesh Mukherjee’s ‘Anand’ (1971) – ironically dedicated to the city of Bombay and Raj Kapoor – gave a tough competition to ‘Mera Naam Joker’ at these awards.

‘Mera Naam Joker’ was released in the Soviet Union in 1972, with each of its chapters as an individual film. The Russians ensured that the three films became commercial blockbusters. The film was also a big hit in many of the South American countries. When the film was released in India as an abridged version, after the death of Raj Kapoor in June 1988, it received an overwhelming response and went on to gain cult status. The ‘Joker’ by then had transcended the boundaries of the circus tent and proceeded on an eternal journey.