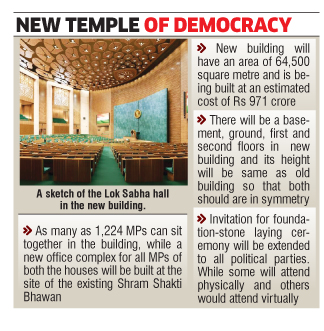 Prime Minister Narendra Modi will lay the foundation stone on December 10 for a new Parliament building and the construction is expected to be completed by 2022 at an estimated cost of Rs 971 crore, Lok Sabha Speaker Om Birla said on Saturday.

“The existing temple of democracy is completing 100 years… It is a matter of pride for our countrymen that the new one will be built by our own people as a prime example of Aatmanirbhar Bharat,” Birla said here announcing details of the new proposed building.

“The new building will showcase the cultural diversity of the country. Hopefully, in the 75th year of independence (2022), Parliament session will be held in the new building,” he said.

He said that as many as 1,224 MPs can sit together in the building, while a new office complex for all MPs of both the houses would be built at the site of the existing Shram Shakti Bhawan.

The existing Parliament building will be conserved as it is an archaeological asset of the country,
Birla said.

The existing building is a British-era building, designed by Edwin Lutyens and Herbert Baker who were responsible for planning and construction of New Delhi.

The new building will have an area of 64,500 square metre and is being built at an estimated cost of Rs 971 crore, Birla said.

He said the outlook of the new building will be similar to the existing one.

“There will be a basement, ground, first and second floors in the new building and its height will be same as the old building so that both should are in symmetry,” he said.

The Lok Sabha Speaker said the invitation will be

extended to all political parties. While some would attend physically and others would attend virtually, Birla said, while adding that the ground-laying ceremony at 1 pm on December 10 would follow all COVID-related guidelines.

As per rules, the speaker of the lower House of Parliament is also the custodian of the Parliament building.

Sufficient steps have been taken to control air and noise pollution during the construction work for the new Parliament building, which will have separate offices for all MPs and those will be equipped with the latest digital interfaces as a step towards creating ‘paperless offices’.

The new building will also have a grand constitution hall to showcase India’s democratic heritage, a lounge for members of Parliament, a library, multiple committee rooms, dining areas and ample parking space.

In the new building, the Lok Sabha chamber will have a seating capacity for 888 members, while Rajya Sabha will have 384 seats for the upper House members.

This has been done keeping in mind the future increase in the number of members for the two houses.

At present, Lok Sabha has a sanctioned strength of 543 members and Rajya Sabha of 245.

In September this year, Tata Projects Limited won the bid to construct the new Parliament building at a cost of Rs 861.90 crore. The new building will be constructed close to the existing one under the Central Vista redevelopment project.

The existing Parliament House building will be suitably retro-fitted to provide more functional spaces for parliamentary events, to ensure its usage along with the new building.

The existing building is a massive circular edifice of 560 feet in diameter. The Parliament House Estate is enclosed by an ornamental red sandstone wall or iron grills with iron gates that can be closed when occasions demand.

The building has 12  gates.