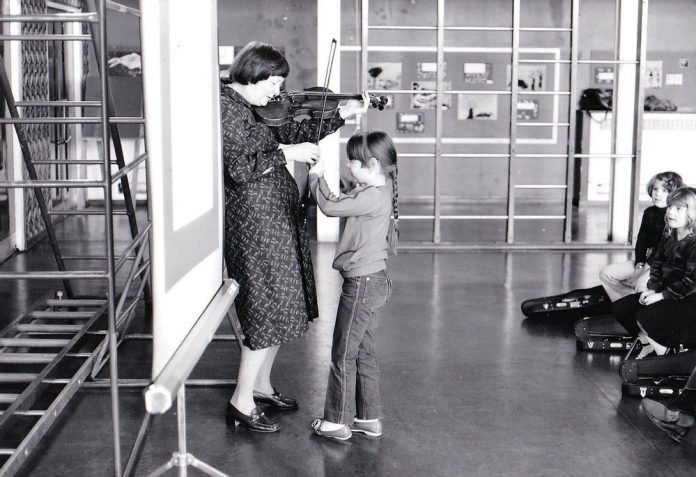 Those of you who are regulars at our Child’s Play concert will have heard our children’s orchestra Junior Camerata Child’s Play. Many of the pieces we have played (for instance, March from ‘Flavuis’ by Handel; New Year’s Song by Robert Schumann; Minuet and Trio by Beethoven) were taken from Sheila Nelson’s Quartet
Club series.

Her death on November 16 (after having lived with Alzheimer’s disease in the final years of her life) is a great blow to the cause of music education, particularly to disadvantaged children.

Sheila Nelson was many things; musician (she had played as violinist and violist with the English Chamber Orchestra, the Royal Philharmonic Orchestra and the Menuhin Festival Orchestra), composer and writer. But her lasting legacy is her inspirational contribution as music educator to many generations over several decades.

My Facebook friend and former editor of The Strad magazine Ariane Todes paid tribute to Nelson on her website Elbow Music. Todes was fortunate in her childhood to have had Nelson as her first teacher.

Reading Todes’ most recent post, as well as an earlier one from 2014 (‘How Sheila Nelson made me love the violin’) and another article written by Ariane’s mother Lili Todes (who was also a journalist like her daughter and ferried her two children to Nelson for music lessons when they were little), I found several learning points that could help guide music education initiatives like ours, Child’s Play India Foundation, and others around the world that also work with disadvantaged children.

One person with a dream and vision can make a huge difference in peoples’ lives, particularly those in marginalised sections of society. String pedagogue Sheila Nelson was virtually a one-woman army, driving week in and week out to impart her seminal teaching techniques to the underprivileged children in schools in the London borough of Tower Hamlets, transforming it into “a mini-Mecca” of string music for under-privileged children.

Her enthusiasm and charisma soon attracted a following of assistants and trainee teachers to help her with
her work.

Like so many others, she was originally a follower of the Suzuki method, but as Lili Todes put it in her article: “Sheila felt that learning to play by ear with a kit comes to a dead halt with the transition to learning to read music.” Wonderful as the Suzuki method is, it has its flaws and limitations; many of its tenets (such as its emphasis on parent’s active involvement at lessons and practice; what about children in shelters with no one-on-one parenting, or parents away at work most of a child’s waking hours?) are not a one-size-fits-all option.

Nelson took into consideration the fact that underprivileged children have different realities and issues to her more privileged private pupils. It’s something we learned quite quickly as well. Underprivileged children are less likely to have parental involvement or encouragement in daily practice. All-too-often, their parents/guardians are away, hard at work as breadwinners. So the answer is to have more sessions during the week, which combine instruction with practice. She used the same zeal and energy in teaching children across the socio-economic
spectrum.

A Churchill scholarship to the US in the 1970s had introduced Nelson to the string-teaching techniques (‘Action in String Playing’) of the late Paul Rolland and helped her to evolve her own method with simplicity and common sense at its core.

And let’s not forget fun! Sing-song sessions, musical games, medals and ice-cream and jelly were all in her bag of tricks to engage young hands, hearts and minds, and associate ‘playing’ an instrument with real ‘play’ in the fun sense. In the picture, you see Nelson deliberately taking a ‘Bad Violinist’ posture, and students play a game of ‘correcting’ her’ and learning good posture along the way.

“She’s a lady with a mission,” said one of her helpers to Lili Todes. “It’s simply to make as many children as possible enjoy music for as long as possible.”

It’s something that’s written into the DNA of Child’s Play in its very name. Our name can be taken literally as ‘children playing’ music, but also ‘children at play’, and regular practice can turn music-making into something easy, or ‘child’s play’.

Games and play are part of our teaching strategies too, as are rewards such as stickers, stars, medals, t-shirts, certificates and treats for work well done. Completion of practice charts is a subject of much friendly competition among our children, each racing to fill theirs first. The post-concert children’s party is another fixture on our calendar.

Nelson was not fazed by challenges such as a child’s not being able to pitch a note. Every child was worth teaching. [This is echoed in our own slogan “Every child is note-worthy”, a pun on noteworthy]. Perfection was “not the name of the game”: enjoyment in music-making was. “And if a young Kreisler should emerge, that was “an extra reward.”

And many proficient musicians did emerge, some making it their careers while for others “enjoyment in music-making” continued and continues to be an important part of their lives.

But even a powerhouse like Sheila Nelson needs public support for her legacy to live on after her. Ariane Todes wrote in a 2014 article on Nelson of her “heartbreaking frustration in knowing that the enormous value that Sheila created back then came to nothing when cuts were made to its[Tower Hamlets project] funding, and that the wheel has had to be painstakingly
reinvented.”

But in a sense, notwithstanding the lamentable funding cut setback, Nelson’s legacy will still live on. As Ariane’s mother Lili Todes had remarked in her article from the 1980s: “Even if in the future they [the children] don’t continue, Sheila feels they will encourage the next generation to handle a string instrument. She feels, in fact, that she is creating a climate in which music will happen quite naturally.”

The accolades are still pouring in from Nelson’s former students who have gone on to become professional musicians, proficient amateur musicians still finding“enjoyment in music-making” in chamber ensembles and orchestras, and a whole cohort of music-lovers, listeners and concert-goers. Theyare strong testimony to the enormity of her impact on their lives.