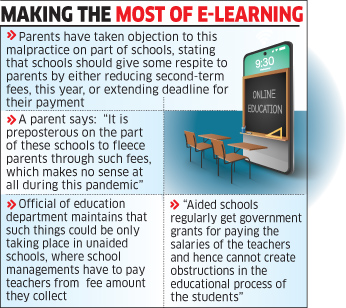 Many of the schools conducting online classes for primary, middle and secondary level students have stopped sending digital material to those students, who have not paid the second-term fees, thus hampering their learning process.

A number of parents have taken objection to this malpractice on the part of schools, stating that the schools should give some respite to the parents by either reducing the second-term fees, this year, or extending the deadline for their payment.

“It is preposterous on the part of these schools to fleece parents through such fees, which makes no sense at all during this pandemic,” said a mother of a girl student studying at a middle-level school in Mapusa, observing that the schools should consider the financial condition of many parents, who have either lost their jobs or suffering salary cuts due to the impact of the ongoing coronavirus pandemic on their employment.

A parent of another girl student studying in a city-based primary school said the moment he paid the second-term fees of his daughter the school restarted sending online educational material to her.

“In fact, the school had stopped sending educational video clips and text material for so long that my daughter nearly forgot the password that had been assigned to her by the school for accessing this material,” he added.

An official of the education department maintained that such things could be only taking place in unaided schools, where the school managements have to pay the teachers from the fee amount they collect.

“The aided schools regularly get government grants for paying the salaries of the teachers and hence cannot create obstructions in the educational process of the students,” he maintained, further stating that if any aided school stops sending digital educational material to the students, then their parents can approach the education department with a related complaint.

Many of the schools conducting online teaching for classes from I to IX, have started holding internal tests through the online mode.

Kamala Harris sworn in as US’ first woman Vice President