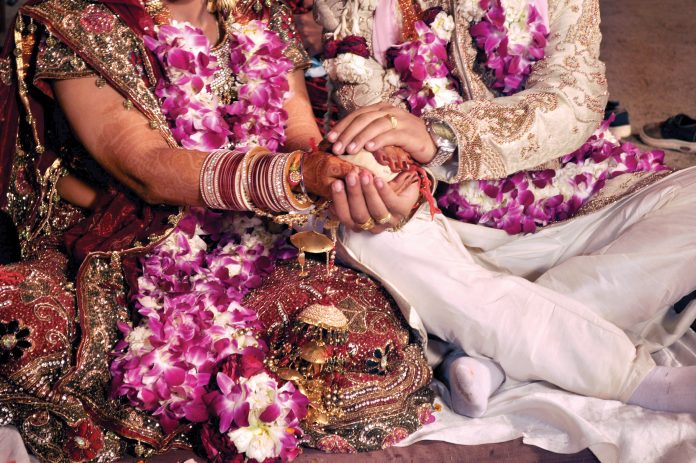 Crisscrossing lines of religion as they navigated love, societal approval and marriage, interfaith couples have never had it easy but the many hurdles on their road to ‘happily ever after’ are now increasingly edged with unease – and the oxymoronic stamp of ‘love jihad’.

Their challenges increase as the chorus gets louder with politicians and others speaking out and several states declaring their intention to come out with a law against ‘love jihad’, a term coined by a section of Hindu groups for Muslim men allegedly forcing women to convert in the guise of love and marriage, say
several couples.

The societal scanner on their relationships has perhaps never been so intense with every incident, whether of crime or an advertisement or a film, impacting on their day to day lives, say a cross-section of men and women in interfaith relationships and marriages.

“The term ‘love jihad’ itself is a farce. How can one bring jihad into a relationship? How can one be restricted on the grounds of religion in marital things? We hope the apex court looks into a law if passed, and strikes it down,” says Delhi-based Sheena Shahulhameed, who is married to a Hindu man.

Recently, the BJP termed ‘love jihad’ a serious problem and backed the decision of its governments in Uttar Pradesh, Haryana, and Madhya Pradesh to enact laws against it.

“Many mothers and sisters have suffered its bad consequences. This is a state matter and state governments should enact law against it,” said BJP general secretary Arun Singh.

The same day, debate over Mira Nair’s ‘A Suitable Boy’ escalated with Madhya Pradesh Home Minister Narottam Mishra saying state police had been asked to examine a scene of two protagonists, a Hindu girl and Muslim boy, kissing with a temple in the backdrop. And once more, there was heated debate on ‘love jihad’, with ‘#BoycottNetflix” even trending on Twitter.

The following day, an FIR was registered in Madhya Pradesh against two Netflix executives for allegedly hurting religious sentiments through the series.

It was a gathering storm.

Last month, the term reared its head when jewellery brand Tanishq was forced to pull down an ad showing a Muslim mother-in-law organising a baby shower for her Hindu daughter-in-law. A few days later, a Hindu girl was shot dead by her Muslim classmate in Faridabad and her family claimed ‘love jihad’.

“The Tanishq case was not a big one. It was done simply to create fear in the society. Any ‘love jihad’ law, however, is against the fundamental rights enshrined in our Constitution,” says Shahulhameed.

The term ‘love jihad’ is increasingly being associated with dangerous outcomes, adds author and columnist Natasha Badhwar, who is married to a Muslim man.

“When I first heard the term ‘love jihad’, I laughed at the absurdity of the conspiracy theory. When (Yogi) Adityanath became Chief Minister of Uttar Pradesh, we heard more and more about this from people in power and realised we could no longer dismiss this as a laughing matter. People›s lives were under threat and it had become urgent to frame a response that countered this communal narrative of hate. I refuse to succumb to the fear and control that the rightwing wants to exercise on minorities and women by stigmatising and criminalising relationships between communities and across caste boundaries,” she says.

The term ‘love jihad’ first drew attention in 2009 after Catholic groups and Hindu groups in Kerala and Karnataka, respectively, reportedly said women from their communities were being forcefully converted to Islam. But it became part of popular discourse ahead of by-elections in Uttar Pradesh in 2014 when the state’s ruling BJP took up the issue in a big way, deepening communal faultlines.

According to sociologist Parul Bhandari, “any eruptions, disruptions in society are emblematic of its state of being”.

“The fact that there was such a furore over the Tanishq ad clearly reveals that certain groups are increasingly disapproving of inter-religious unions,” says the associate professor of Sociology at the O P Jindal University.

Many have taken upon themselves the responsibility to break out of set norms for people of different communities.

Like Waled Aadnan, who is dating a Hindu woman. For him, religion is a determining factor when it comes to relationships but not in a way one would expect.

“Religion was important to me when the relationship started. I believe it is our responsibility to look outside our bubble of class, caste, linguistic group and religion in our choice of partners to build a world that can talk to each other more. That’s definitely a conscious decision. Everyone can’t just happen to fall in love only with people with similar surnames,” says Aadnan.

To him, the recent controversies over the Tanishq ad and ‘The Suitable Boy’ are “soft battlegrounds for everyone to outrage or support”, and there are bigger and more important battles to fight.

“There are actual people in prison for love, people being murdered for love and if anything, that’s where all the support should be channelled,” he says. A law on ‘love jihad’ will only aggravate the challenges in his view.

“India’s marriage laws for interfaith couples have anyway been restrictive. The Special Marriage Act has in-built patriarchal checks to make inter-caste and interfaith marriages difficult. Any ‘love jihad’ law will just continue on the same path,” he says.

Enacted in 1954, the Special Marriage Act was legislated to govern marriages that could not or were not performed according to religious norms. The validity of some provisions of the law were challenged in September this year by a plea, claiming they violated a couple’s fundamental right to marry and privacy.

The discourse around a potential ‘love jihad’ law has also rattled interfaith couples where neither partner is a Muslim.

Annu Matthew, who is married to a Hindu and relocated from Delhi to her hometown in Kerala a few years back, says she had always felt “on the edge” while she was in the capital. “It has crossed my mind at least once that I am in an interfaith marriage and thank goodness I married a Hindu man. There is this sense of relief that if I ever get pulled up for my religion I can at least say I am married to a Hindu. I know it is a wrong thought but deep down I feel a little bit safer,” she says.

Sharing successful love stories across religions can be a starting point to normalise interfaith relationships, says Bhandari. “One way to combat the anger and anxiety (and desire to dominate) by one group is to remind the society of the merits of peaceful coexistence and secularism. In the context of interfaith unions, this would imply bringing focus to those stories where the couples have lived happily ever after with each other, without allowing their religious differences to be a thorny issue in their marriage,” she says.

‘The India Love Project’, an online platform, does just that. Founded by journalists Priya Ramani, Samar Halarnkar, and Niloufer Venkatraman, the platform tells stories of “love and marriage outside the shackles of faith, caste, ethnicity and gender.” Halarnkar said on Twitter that the project requires counsellors and lawyers to advice couples and they are “getting more and more appeals for help”.

As the issue gathers momentum, plans seem to be firming up. The BJP government in MP, for instance, said it plans to introduce a Dharma Swatantrya (Religious Freedom) bill in the next Assembly session. The bill will propose rigorous imprisonment for the period of five years for luring a person through fraud and forcing marriage by religious conversion, state minister Mishra said.