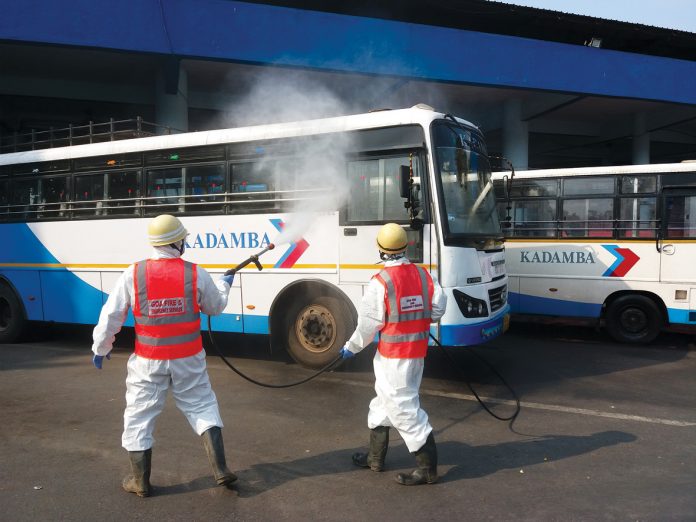 The National Institution for Transforming India, also called NITI Aayog, in its report titled ‘Mitigation and Management of COVID-19, Practices from India’s States and Union Territories’ has stated that “Goa was one of the first states to put in place random testing protocols to check people entering the state for potential COVID-related symptoms.”

“Testing kiosks were set up in various places across the state, especially at the borders and in industrial estates,” it adds.

The report discussing production and distribution of medical supplies in Goa observes, “During the national lockdown period, the state administration issued permissions to liquor manufacturing units for producing hand sanitisers, including for government departments such as health, police and disaster management, etc, and after meeting the local demand, sanitisers were exported out of the state.”

Furthermore, the report maintains, “The state made efforts to facilitate easy communication between citizens and doctors by leveraging technological innovations such as CallDoc and tele-consultations.”

Discussing ‘other practices’ in Goa, the NITI Aayog report states, “To encourage those involved with the manufacturing, transportation and distribution of medicines, and medical equipment, to resume work during the lockdown period the state government recorded an appeal and circulated it on the WhatsApp groups.”

“Appeals were also made through print and other news media which highlighted that such workers were equally important in the fight against COVID as health professionals,” it adds, pointing out, “In cases where workers in pharmaceutical and related industries were forbidden from going to work by Resident Welfare Associations (RWAs), the local administration adopted a mix of persuasion and enforcement; WhatsApp groups were also formed to ensure an immediate response by the administration in cases of overreach by RWAs.”

The report was released earlier this week by NITI

Kant, in the foreword of the report has written, “While there is much to be gained by learning from global practices for tackling the pandemic, it is equally important to take note of practices that are grounded in our realities.” “Instead of expecting every state to reinvent the wheel, dissemination of such practices allows them to learn from each other and help find solutions to common problems,” he added.

“As we continue our fight against COVID-19 on a war footing, I take this opportunity to congratulate states and Union territories across India for their initiatives in tackling this unprecedented crisis and appreciate the efforts of the health team at NITI Aayog,” Kant notes.

Goa was under strict lockdown, which helped it to achieve green zone status on May 17, 2020. However, the reopening of borders had led to a spike in COVID-19 cases in the state. Random testing was carried out at borders and even within the state including airports and railway stations that helped detect cases and contract tracing.

The state’s Standard Operating Procedures (SOPs) were in line with the Centre’s guidelines, which for routine COVID surveillance, followed the RT-PCR, the CBNAAT or the rapid antigen tests.