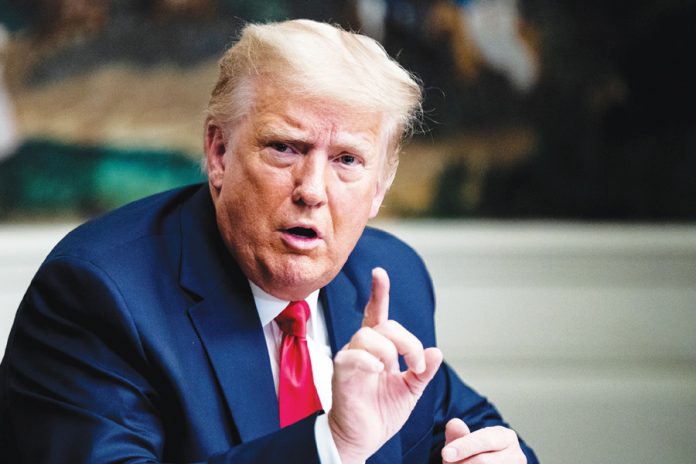 Washington: US President Donald Trump said for the first time that he will leave the White House if the Electoral College declares Joe Biden as the winner, but made clear he is not prepared to “concede” the election.

Trump, a Republican, has refused to accept defeat in the November 3 presidential election, and told reporters on Thursday that it would be “hard” to concede to Biden, a Democrat.

“It’s going to be a very hard thing to concede because we know there was massive fraud,” Trump said, once again repeating the unsubstantiated claims of voter fraud.

The 538-member Electoral College is scheduled to meet on December 14 and is expected to formally declare the 78-year-old former vice president as the 46th US President.

Under the US electoral system, voters do not directly choose the president. Instead, they vote for 538 officials, who are allocated to American states based on their population size.

Biden leads Trump 306 votes to 232 under the Electoral College system used to pick US presidents. Biden’s tally is far more than the 270 needed to win the race for the White House, and he also leads the popular vote by more than six million.

In his Thanksgiving Day remarks, Trump, however, said it will be a mistake if the Electoral College were to elect Biden.

“It’s going to be a very hard thing to concede,” Trump told reporters when asked during a press call at the White House what he will do if the Electoral College elects Biden.

On his plans for his last Thanksgiving in the White House, Trump said, “You can’t say what’s first or last.”

It might be the “first one of the second term,” Trump, who is continuing his legal efforts to upend his victory.

Earlier this week, Trump allowed the official start of Biden’s transition to power without conceded defeat. Biden due to be sworn in as president on January 20.

However, election officials in key battleground states have declared Biden the winner, giving him an unofficial 306-232 edge in the Electoral College that determines the outcome of US presidential contests.

“This was a massive fraud,” Trump said of the election.

“We are like a Third World country,” he said, referring to the voting infrastructure.

“No one wants to see the kind of fraud this election has come to represent,” he added.

Marcelo re-elected as President of Portugal