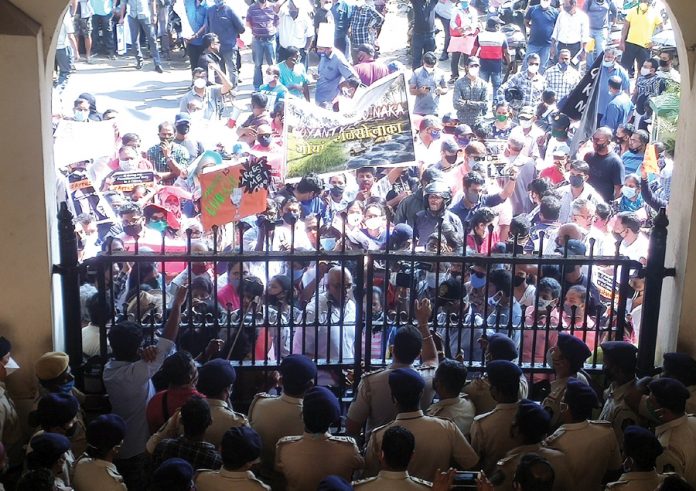 Margao: Raising slogans against the government, hundreds of anti-coal and anti-track doubling protesters assembled at the South Goa district police headquarters to show solidarity with the two activists, who were summoned by Maina Curtorim police. FIRs have been registered against six persons, including the two who were summoned on Friday, for allegedly blocking the road at Chandor on November 2 night.

Holding placards, banners and posters, the protestors criticised the government and the bias approach of the Goa police.  The protest continued for well over three hours. The people, gathered on the road in front of the police headquarters, demanded that the police should take action against them also as they too had participated in the anti-coal agitations across the state.

“The FIRs and interrogation are an attempt to threaten us. We will roll out our strategies one by one in due course of time. And as we do, the government will realise that it has done a biggest mistake. Goans will not hesitate to do what is required for saving Goa for future generations,” said Captain Viriato Fernandes of Goencho Awaz.

The protesters said they have followed all the democratic ways to lodge their protest against the coal handling, track doubling projects, however, if they are compelled to take law into their own hands the government will solely be responsible for it.

Abhijit Prabhudesai, co-convener of Goyant Kollso Naka (GKN) and Sandesh Talegar Desai were called for interrogation on Friday by the police.

The people, who had gathered outside the district police headquarters in solidarity with the two activists, sought to know why FIRs were not filed against politicians who were present for the agitation on November 2 night and demanded that the FIRs registered against the six activists be quashed immediately.

Tense moments were witnessed as the crowd attempted to move towards the gate of the district police headquarters building, that was closed and guarded by a strong posse of police.

“Police asked us a few questions. We told them that the agitation is of the people of Goa. There were nearly 10,000 people at Chandor that night. Half of the panchayats in the state have resolved that they do not want coal and track doubling. False complaints have been filed against selective people and we demand that the FIRs be quashed immediately,’’ Prabhudesai said after the police interrogation.

Sandesh Desai added that he has not given anything in writing to the police.

The agitating crowd demanded action against DySP for allegedly abusing women at Davorlim.

“He misused his power by offending the women. We demand that action be taken against the DySP,” Cresson Antao and several others demanded.

They also filed a complaint before the SP south against the police inspector of Maina Curtorim police station for allegedly “being bias in registering FIRs against selective persons” in connection with November 2 night protest at Chandor and demanded immediate quashing of the FIRs.

Around 300-plus signatories to the complaints pointed out that “the coal handling and transportation, coal infrastructure projects, and river nationalisation are not in the interest of Goans. The coal handling is already destroying the health of lakhs of Goans. The coal transportation infrastructure including double tracking of SWR, NH4A and 17B widening, river dredging and construction of jetties, projects through wildlife sanctuary and national park, are only for the profit of three corporates.”

It may be recalled that based on a complaint lodged by police sub inspector of Maina Curtorim police station, offence under sections 143, 147, 341 read with 149 of IPC was registered alleging that on the road connecting the crossing of Chandor railway gate protestors formed unlawful assembly and that movement of vehicular transport and pedestrians was restrained as activists protested against the order issued by district collector for double tracking.