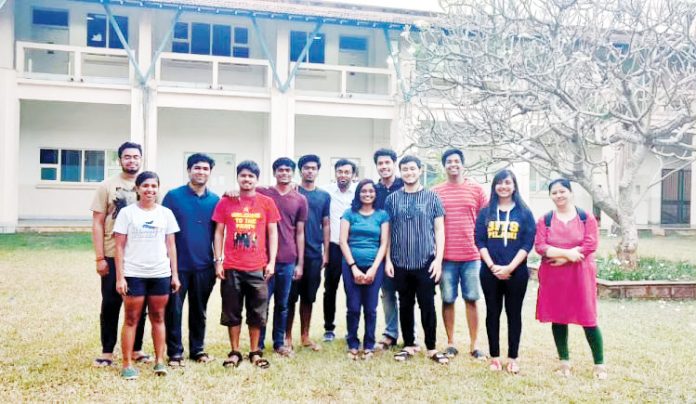 A group of students from BITS Pilani K K Birla Goa Campus has won a gold medal at the iGEM 2020 Virtual Giant Jamboree on November 22. The team also won special awards for the Best Software and the Best Composite Part. With this win, the team also has became the first ever BITSian team to have participated in iGEM 2020.

The iGEM (International Genetically Engineered Machines) Foundation is an independent, non-profit organisation dedicated to the advancement of synthetic biology. Each year, they host the iGEM competition, where they give 250+ student teams an opportunity to push the boundaries of bioengineering through designing, building, testing and measuring systems of interchangeable biological modules with standard
biological methods.

For the competition, the team focused on a problem plaguing the sugarcane industry: the issue of post-harvest sucrose deterioration. The team came up with a solution — SugarGain to help reduce the loss plaguing both the farmers and the mill owners. “SugarGain is basically a solution with genetically-engineered Escherichia coli that targets the invertase enzyme responsible for the degradation of sucrose levels in sugarcane,” says Biswas. “It is introduced into the cane by injecting a polymer-based inoculant. Once inside, the bacterial chassis exhibits anti-invertase activity in a continuous and controlled manner. Since our bacteria is closely involved with a consumable product, we kept biosafety in mind and designed a robust three-tier fail-safe mechanism.

Biswas who guided and helped design the concept behind the project and the experiments to be conducted, also trained the student team in the theories of synthetic biology. Stating why no team from BITS Goa participated in this competition till now, he says that iGEM is a very tough and multi-faceted competition. “Apart from the work in synthetic biology, the team also has to design models for the experiments to succeed, and prepare a full audio-visual repertoire of the work and process, (which includes a Wiki page, a two-minute video and a 20-minute presentation). Being a daunting task, it took some time, courage and interdisciplinary effort before we committed to it,” he says.

The ball was set rolling from September 2019 and they started metamorphosing their idea to help sugarcane farmers derive a solution to their woes through a synthetic biology method. They also spoke to stakeholders in the sugar industry, like the mill owners and the Sugar Factories Federation. With inputs collected from across Tamil Nadu, Maharashtra, Karnataka and Uttar Pradesh, the team got to work, keeping in mind the practical aspects of the production process, the economics, the safety of the final processed product vis-à-vis the consumers.

And by January 2020, the team had got all parts of the jigsaw, and had started putting together different components. “Then came the aspect of financing the team for the competition. iGEM is a little expensive to attend. Here, the alumni of BITS, especially the batch of ‘71 came together. The team made strong presentations to multiple BITS alumni, scouted for financial sources and convinced them to allot the sizeable amount needed for the team to participate in the Jamboree,” says Biswas adding that the director, BITS Pilani K K Birla Goa Campus, helped a lot, supporting the team and linking them to different sources.

The team did the basic laboratory experiments by February 2020 and was all set to take things to the next level when the pandemic happened. The sudden lockdown and the inaccessibility of labs led to several of their plans going haywire. Thankfully, Biswas says that iGEM remodelled some of the competition targets, but getting things done in an online mode was a Herculean task. Especially tricky was the team video, with different members in different parts of the country.

“Though the team had to scatter to different parts of the country, the team members made sure that they compensated for what they lacked in terms of lab work, with copious and intricately-designed models to show the efficacy of the production and delivery of the SugarGain mechanism. Through numerous online meetings and profuse networking, the team had their work ready on time (October 2020) and was all set,” adds Biswas.

At the event, on November 15, the team had to face a panel of international judges who went through a detailed cross-evaluation of the project. Biswas further informs that every aspect of SugarGain was evaluated and judged against the 270-odd teams which participated. “Finally, on November 22, came the big day. First came the news of the team gold. This was a validation of the all-round performance of the team in all the judging categories. Then, came the special prizes: Best Software and the Best Composite Part, which meant that the synthetic biology design of the SugarGain project was awarded the best in the category.”

While SugarGain will now be tuned to make this a marketable strategy and farm-based solution in the future, there are other benefits that have come about as a result of this project, says Biswas. “Firstly, it will encourage students to take up synthetic biology to solve problems affecting local needs,” he says, adding that the team undertook several outreach programmes, albeit in an online mode during the pandemic, to encourage synthetic biology among local students (high school and below). The audience response, he says, was very encouraging and they strive to continue this initiative. “The project will also inculcate a belief in people that science can provide a solution to several aspects of life,” he says.

Living a masked life on campus

A love song for Earth