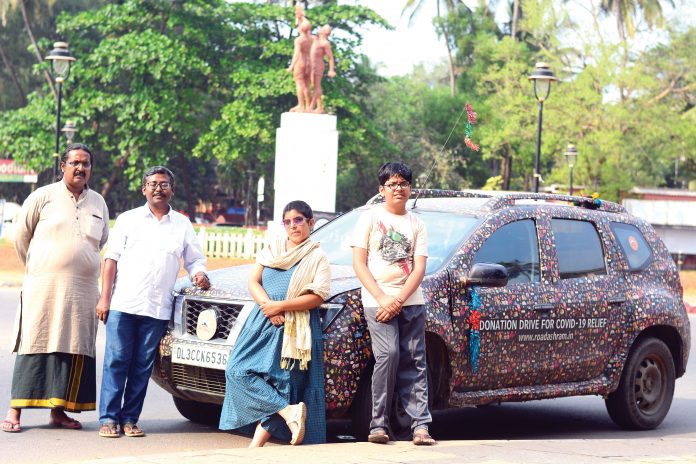 As part of their Road Ashram campaign to raise awareness on the humanitarian impact of COVID-19, a group of Indians have been journeying through the country in a personalised car. NT BUZZ caught up with them

A group of socially conscious Indians have rolled out a donation drive to support people affected by the pandemic. As part of their campaign called the ‘Road Ashram’, the team is travelling along the borders of India and union territories, covering nearly 25,000 kilometres and 30 states, in about 60 days. The group comprising of Siddhartha Dutta along with Ahmer Siddiqui and son Arsh, and Neha Chaturvedi, is travelling in a customised car with symbols of various regions of India.

Having begun their campaign on October 4 from Delhi, the team travelled along the China and Nepal borders in Uttarakhand before proceeding to Uttar Pradesh and Bihar. In Kolkata, they met some NGOs (not-for-profit organisations) and eminent people of the city including the mayor, while in Sikkim they met with personalities like Bhaichung Bhutia. There on, they went to the Bhutan border in Jaigaon, West Bengal. Later, they travelled to Assam, and most of North East, before proceeding south. The group is now making their way through the west coast of India and were recently in Goa.

Explaining how Road Ashram came about, Dutta, who hails from Kolkata but is currently based in Mumbai says that in the backdrop of COVID-19 and subsequent lockdown, like everyone else they too were also locked-up in their homes. However, he says, they were privileged as they did not have to worry about their meals or livelihood. “But not many were so fortunate enough. Soon the media showed us distressing pictures of large number of migrant workers walking long distances to reach their home. While we knew of the distress that poor people face on a daily basis, the lockdown brought their misery to the forefront,” he says. Affected by the misery all around, the team decided to step up and do something. “As responsible citizens we did some relief work in our surroundings but we realised that we needed to do more. So after a lot of thought Ahmer and I came up with this Road Ashram campaign,” says Dutta.

Elaborating further on the many problems that have risen as a result of the pandemic, he says that amidst the medical crisis and the safety measures, there has also been tremendous damage to the social structure –  innumerable people have lost their jobs, healthcare has become difficult, children have been affected due to lack of immunisation and erratic
education.

There has been an increase in poverty, instances of early marriages, malnutrition and making of laws in an arbitrary fashion, and more, says Dutta. “The purpose of Road Ashram is to bring attention to all these stories of people and ensure that we do not limit ourselves to measuring the impact of the pandemic to the medical crisis. This humanitarian crisis that has surfaced will take much longer and a lot of collective will and effort to resolve and we all will have to keep striving to find our feet back on stable ground,” he says, adding that the non-profit sector is doing whatever is possible with the available resources, but it is not enough. “These organisations, especially the grassroots level NGOs need immediate support to continue their life saving work. Through Road Ashram campaign, we wish to appeal to everyone to make a generous contribution to the cause,” he says.

When they first decided to embark on their campaign however, Dutta admits that their families were worried about their health and safety but the group managed to convince them about their idea. But budget remained a problem. “First, we tried to get some sponsorship but we failed as many did not understand what we were about to set out for. While we did get small monetary support from a well wisher, most of the campaign expenses including car, fuel, stay, food, toll taxes, and unforeseen expenses are taken care by me and Ahmer personally,” says Dutta who is in charge of navigation and fixing up meetings with eminent people and planning for upcoming engagements. The car is driven by Delhi-based Siddiqui. He also does the entire route map planning, while Chaturvedi from Agra is a painter and practices visual art. She also runs a community in Agra.

“The idea is to stay on the road – in our very own, personalised car. Alongside, raising awareness about the difficulties caused by the pandemic, we will share videos and stories of India’s culture, places, and everything else that makes India what it is –a diverse, colourful and fascinating India,” says Siddiqui.

While there were apprehensions about smooth travelling from state to state due to strict protocol, Dutta reveals that they moved around everywhere reasonably easily. However, they could not go to Mizoram as they had imposed lockdown again.

Also as they are travelling along the borders and remote roads they did not drive much on national highways. And in general the road conditions are bad in most places, says Dutta. “Southern India has relatively better roads. Road conditions are really bad in North East India. Even the connecting road between Siliguri in West Bengal and Sikkim is in miserable condition. There are reasons for North Eastern people to feel disconnected from the rest of India as they have not seen the benefits of good roads, tele-connectivity, etc,” he says.

In Goa, the group was met with warm and friendly Goans. “Many of them have taken selfies with us and our car. They have asked for the details of our campaign,” he says, adding that they met people from different walks of life. They also met eminent Goan personalities like historian Prajal Sakhardande, activist Claude Alvares, mosaic artist Shalu Sharma, etc.

The group is now heading to Maharashtra and further north. Their campaign is expected to conclude on December 17 in Delhi. And the team has invited people to follow their campaign on their website and social media channels to know more about the cause and learn more about the epic journey.