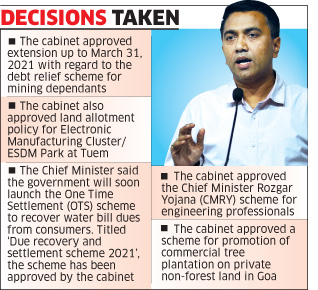 The state cabinet on Wednesday approved 50 per cent rebate on road tax for all commercial vehicles for this year.

“For the first six months of the current financial year, business was down. So they will have to pay for the remaining six months only. For those who have already paid 100 per cent road tax for this year, the difference amount will be carried forward,” Sawant said.

The cabinet approved extension up to March 31, 2021 with regard to the debt relief scheme for mining dependants. The cabinet also approved the land allotment policy for Electronic Manufacturing Cluster/ ESDM Park at Tuem. Besides, a proposal for the education department to distribute ration through marketing federation to students at their homes under the mid-day meal scheme was also approved.

The Chief Minister said the government will soon launch the One Time Settlement (OTS) scheme to recover water bill dues from consumers.  Titled ‘Due recovery and settlement scheme 2021’, the scheme has been approved by the cabinet, he said. “This scheme will help the government recover dues to the tune of Rs 125 crore and also provide relief to the common man by enabling him to settle the pending dues,” Sawant said

The cabinet approved the Chief Minister Rozgar Yojana (CMRY) scheme for engineering professionals. Sawant said under the scheme, degree holders in civil engineering will now be allotted PWD projects worth up to Rs 10 lakh and projects up to Rs 5 lakh will be allotted to diploma holders. He said the project work will be allotted through competitive bidding for each slot of degree and diploma engineers below 35 years of age. “They will also be provided with loans under Economic Development Corporation to take up the projects,” he said, adding that the scheme will eventually be extended to other engineering streams for contracts in the near future.

The cabinet approved a scheme for promotion of commercial tree plantation on private non-forest land in Goa through simplified regulatory regime and Ease of Doing business. Sawant said that commercially useful trees such as sandalwood, rosewood, ‘matti’, ‘sagwan’, ‘khair’ etc can be planted by the owners in such private non-forest lands. Those availing this scheme will not require the forest department’s permission to cut these trees once they become ready for felling in a period of 3 to 5 years.