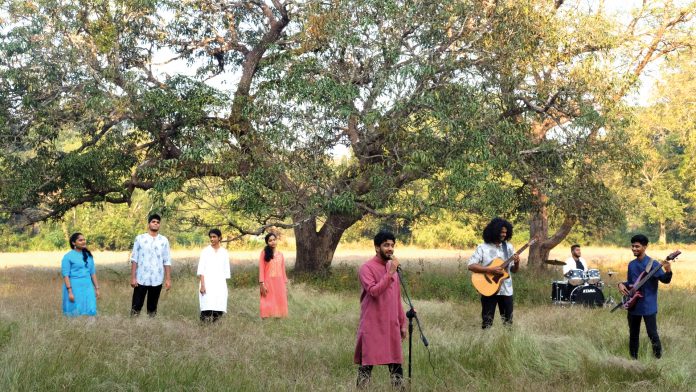 The Anthem of Unity, as he calls it, was done in the true spirit of the festive season. “‘Ek Katha’ was a concept brought to reality from a topic close to my heart. I want everyone to be united or else there will be fights and chaos around. Unity is required to make the world a beautiful and better place to live in,” he says believing firmly that communal harmony is essential and the need that can dispel most of the problems we face in society.

Through thoughtfully written lyrics and visuals, the over 4-minute song is one that touches the heart and has the power to strike a connection. Talking a little bit about the pre-production Afonso tells us, “It was our friendship that brought all of us together, particularly Zinho Fernandes who played an instrumental role in getting the team together.” The video was shot at Zorivaddo Gudi, Paroda and Rubber Plantation SVD, Raia after the music was composed in just three days.

With the festive season that began with Diwali and will extend with Christmas and New Year, the video describes how happiness should be spread along with true love and care for humanity.

He says: “There is unrest in society because of misconceptions, ego, corruption, etc. We can extend love and care to each other through music and by lending a helping hand to whoever is in need.”

Afonso is a passionate artist who expresses that there are several love and romance themed Konkani songs, but not many on the theme of unity, which is why he thought of this song. He says: “With society being so divided on various counts, I wanted to utilise this platform to put forth a strong message of unity. Hence, I composed this song from my heart.”

The talented youngster is grateful to his parents Tadeu and Miriam, who he says have inculcated values in him. Their support and teachings have helped him think of such issues on a broader perspective and seek for solutions or at least plant the seed of some hope through the audio visual medium, which he believes has a greater impact.

However, Afonso gives credit to his large team that supported his vision through their talent and expertise. His friend Zinho gave him the much needed push to get the song recorded, shot and edited in a span of 15 days. The video features Myriam Fernandes, Jocelyn Godinho, Allson Dias and the children of Zorivaddo Gudi, Paroda. Shot by Anish Araujo and Melvinson D’ Costa the video has been edited by Leander Fernandes while the colour grading has been done by Nathan Colaco.

Zinho has co-written the lyrics with him besides taking care of the music direction. The other musicians are Desmond (keyboard), Sid Gomes (drums), Cyrus Fernandes (bass), Karen Coelho (violin) and Zinho (guitar). The backing vocals of the chorus were arranged by Karen Coelho and sung by her and Benecia Colaco, Alia Colaco and Dulcio De Melo. The music for ‘Ek Katha’ has been recorded, mixed and mastered by Noel Rosh.

The song is a testimony of unity, says Afonso, who believes that unity in strength became a reality, when he saw the efforts of his teammates while working on ‘Ek Katha’. Currently pursuing a Master’s degree in science, he plans to follow his passion of music with equal zeal and dedication for a better society.