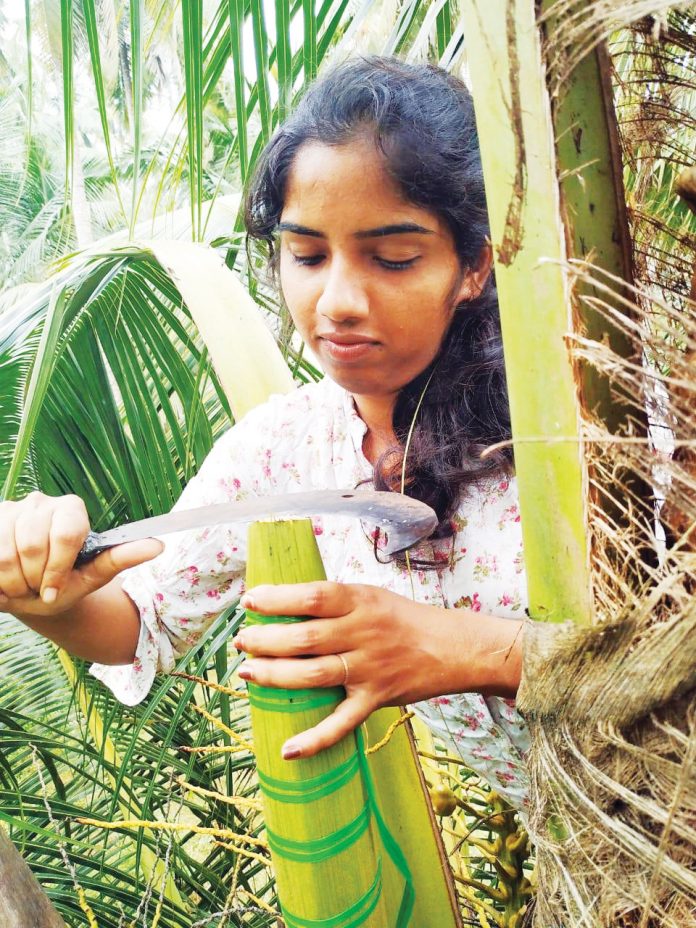 Today is the ‘fama’ or announcement of the novenas and feast of St Francis Xavier, the Patron Saint of India. The Society of Jesus that he had co-founded along with St Ignatius of Loyola and St Peter Faber, is famous for its spirit of inquiry that even got the Jesuits into hot soup with the Popes for almost two hundred years, when the order was ‘suppressed’. They are also accused of getting heretics in trouble and other punishments during the inquisition. The inquiry in Goa was about God then and it may be about ‘godd’ now. Is the coconut jaggery really ‘maadamchem godd’, ie made from coconut sap or neero? Inquisition is about revealing the truth and exposing the pretenders.

The unopened spathe or coconut bunch can yield about twenty litres of toddy over a period of two months. For those twenty litres of neero, the toddy tapper has to climb the coconut tree for sixty days, thrice a day during the period of extraction. The effort justifies the price of `100 per quart or `120 per litre of neero or its fermented successor, toddy or sur. It takes about six litres of neero to make one kilogram of jaggery. It is this detail that makes it impossible for someone to sell real coconut jaggery at `120 or even `200 a kilogram. As long as one does not assume that any zagor is a religious tradition. It is not. It is a cultural event. Like the change of religion or political ideology for monetary gain that is rampant today, sugarcane jaggery is caramelised and poured into pyramid forms to appear as if it is the real coconut jaggery.

The neera or kalparasa is made into sugar and traditionally into pyramid shaped, dark brown jaggery without which ‘dodol’ is just not possible. The dodol is the flavour of the Christmas season as the patolleo, with grated coconut and coconut jaggery, are of the month of August. The traditions continue except for one little detail: the jaggery is fake! Does the Goa Directorate of Food and Drug Administration or FDA have the wherewithal to test the authenticity of the jaggery or is it handicapped as in the case of formaldehyde in the fish? Sometimes, it is convenient to ignore as in the case of the now ‘traditional’ yellowing of what were once known as the ‘green plantains’ from Vasai.

The Government is committed to make Goa an ‘organic’ state like Sikkim and has launched the Paramparagat Krishi Vikas Yojna besides announcing its intention to set up India’s first Organic Agriculture University. It is time to evaluate what has happened about the scheme launched in 2015 to promote hybrid coconut trees in Goa for easy toddy tapping, expected one year after planting. If the experiment has been successful in getting toddy almost at ground level, the scheme should be expanded and promoted in a big way so that we can hope for authentic coconut jaggery at an affordable price in the near future. Young men like Clarence D’Souza in Aldona and Anandrao Rathod in Saligao are already experimenting with toddy tapping. May their tribe increase.

Getting reel about Bollywood

‘Sarfarosh 2’ will be dedicated to CRPF: Matthan