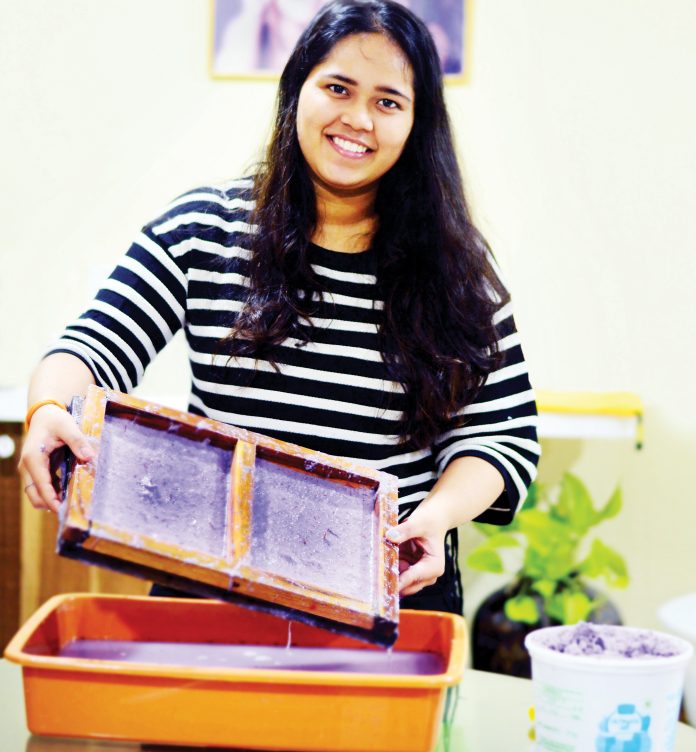 Kashish Mehta has always been captivated by the sheer vibrancy of paper, be it the texture, the colours or the smells.

“It fascinated me like soft toys fascinate a child,” says the Miramar-based youngster. In fact, so charmed was she that over the years she has turned into an avid collector of stationary. “The dream was to either own a stationary or a paper company someday,” she says.

But during the recent pandemic-induced lockdown she had an epiphany. “One night it struck me that I could start working on my dream now itself! So, I went on YouTube, browsed through videos on papermaking and read articles on the topic. The very next day I went to the market and got it all set up,” she says.

A second year student at Parvatibai Chowgule College of Arts and Science, Margao, Mehta mostly uses old, used notebooks that she finds around her house to create new handmade paper.

“First, the used pages are cut into small strips or pieces and soaked in water. This is then ground in a food processor or normal grinder. This will make your paper pulp,” says Mehta. The pulp is then added to a deep rectangular container filled with water. This forms what is known as the vat.

Using a mould and deckle, Mehta slowly drains the water out. The mould is then removed and the deckle flipped onto a base. With a sponge, she then removes any excess water, peels off the deckle and leaves the paper to dry.

Apart from used notebooks, she has also tried using a bunch of different fibres such as corn fibres, corn leaves, and banana stem fibres. “I still use corn fibres whenever they become available to me, but I have stopped using banana stem fibres as I do not believe in cutting down something that still has use just to make paper. I’d rather use things people are already going to throw out,” she says. Besides this she has also experimented with adding flowers to the pulp. “I like grinding the petals in with the pulp so it gives a nice look to the paper. The petals form an emboss on the paper,” she says, adding that while she searches for inspiration from other paper-making accounts online and reaches out to them for tips and tricks, a lot of the magic happens through trial and error.

And while she began posting her work online just to document it, given the great response she received, she then began selling the works. “The demographic mostly consists of artists, people who like journaling, a gifting company or people who are just paper enthusiasts like me,” she says.

Recently, she also got an offer from a local chocolate making business to experiment with cacao bean husks. “I haven’t gotten the pleasure of trying it out yet, but I’m definitely looking forward to that,” she says. “Other than that, I want to experiment with cotton rags. Right now, I am also experimenting with natural dyes.”

But again, she reiterates that she is still learning and has a long way to go before she can achieve the perfection she desires.

“Also, I am still a student and often don’t find the time to make batches as often as I’d like to,” she says, adding that she has had an immense amount of help from her elder sister Pankti Mehta in understanding and handling the marketing and promotion side of things.

“I definitely want to continue this as a side business and would like to see it succeed and evolve into an eco-friendly, upcycling business. In fact, I will soon be asking people to donate their old notebooks to me,” she says. “Having said that, paper making, in the end, is a personal activity I do for relaxation and just the aspect of working with my own hands gives me immense satisfaction.”

“ Even if this fizzles out, “ she adds, “I will be grateful to have this experience and having learned so much, not just the skill but the whole running of a business.”

Getting reel about Bollywood

‘Sarfarosh 2’ will be dedicated to CRPF: Matthan