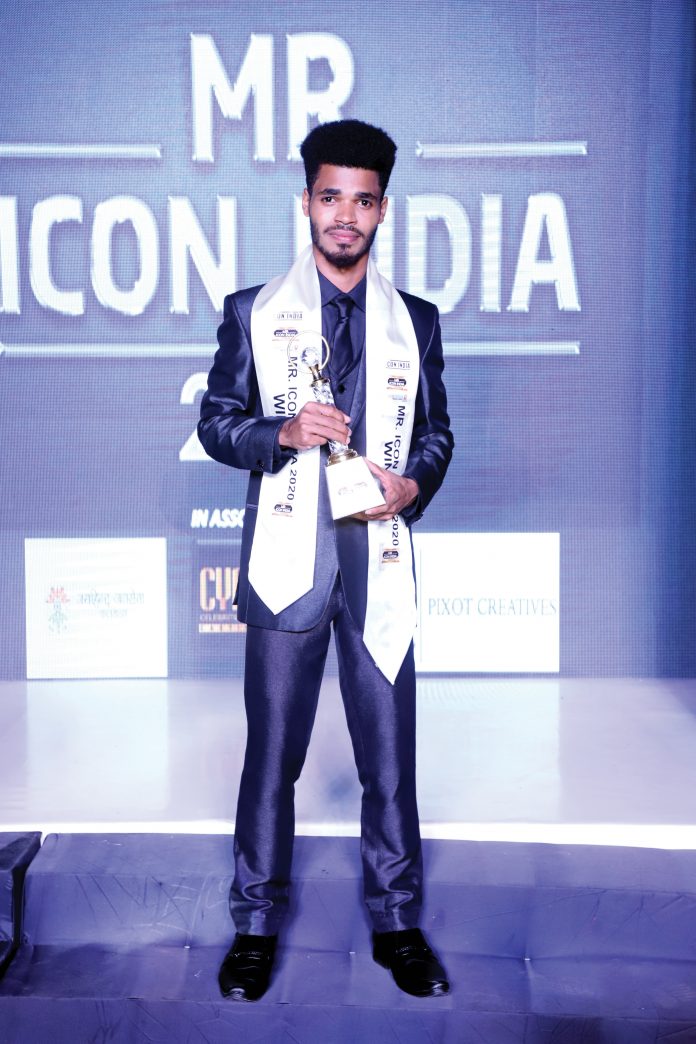 It was in January this year that Juanv Amlapache stepped into the world of modelling. The move, he says, was inspired after hearing about the experience of his best friend Hriya Patil who is a model herself.

“Hriya and I were classmates. She always used to tell me about her experience and wanted me to get into the line too. She is my role model as she guided me throughout my journey,” says Amlapache.

And in a short span of time; Amlapache has already got a national beauty pageant win to his credit. Hailing from Manora, Raia, the youngster recently represented Goa and won the title of Mr Icon India as well as the Best Healthy Hair at the Mr & Miss Icon India 2020, a national level pageant for both male and female categories held in October in New Delhi.

Recalling how it all happened, Amlapache narrates that he had given his first ever modelling audition for Stellar Mr and Miss Goa in Calangute but was not selected due to the height limit. “My height is 5’7 whereas the requirement for this contest was 5’8,” he says. The lad then began looking around for other opportunities which were suited for his height and came across a poster of Mr & Miss Icon India to be held in Goa. The very next day, he gave his audition and was selected. It was only after he reached the finals that a small problem presented itself – the finals which were supposed to be held in Goa was shifted to Delhi. “This was bad news for me as it was very difficult to travel to Delhi in these pandemic times. Many people advised me not to go due to increase in COVID-19 cases there. But given that this was the best and the first opportunity for me to prove myself, I decided not to step back and with help of my friends I made it to Delhi,” he says. Incidentally this was his first train journey and he had never been so far all on his own.

And while all he had learned so far about modelling has been through his friend’s experience and through YouTube, the contest, he says, gave him a lot of in-person knowledge about being a professional model and a clearer image of modelling life. “Most importantly I learned that no matter how much experience we have, when we are on the same stage everything feels equal and we all support one another,” he says.

The event was organised by the Icon India Pageants, New Delhi, and Amlapache states that right from Day 1, the Icon India team started guiding him on preparing himself and also helped him in doing workouts. “I was in Delhi for four days and for three days we had our grooming sessions and we had points based on our grooming and dressing. On the Grand Finale, there were a total of five rounds ie, introduction round/ traditional round; followed by Indo-Western round; casual wear round; black suit round, and round 5 was question and answer round for the top five selected models,” he says.

While his win came as a pleasant shock to his friends who knew him to have a simple dressing sense with not much interest in fashion prior to this year, he however expected to win, especially because of his Afro curls, a rarity in the Indian modelling industry. He believes that his hair can take the Indian modelling industry in a different direction as they won’t have to advertise international curly hair models anymore. His dream is thus to be India’s first model with Afro curls. In fact, he says, American and Afro models with similar hair are in high
demand nowadays.

And the model is grateful to Wilfred D’sa from Betalbatim who guided him and also provided his house for the semi-final photoshoot. He is also thankful to Patil for guiding him for auditions to Grand Finale; Valentine Coutinho, Deepak Rajbhar and Muna Kumam for providing financial support and Sudhakar Kumar for  doing his photo shoot  for the semi-finals.

Having completed his Diploma in Food Production from Agnel Institute of Food Craft and Culinary Sciences, Verna, Amlapache is currently in his final year of BCom at Shree Damodar College of Commerce & Economics Margao, and aspires to be a businessman
in the future.