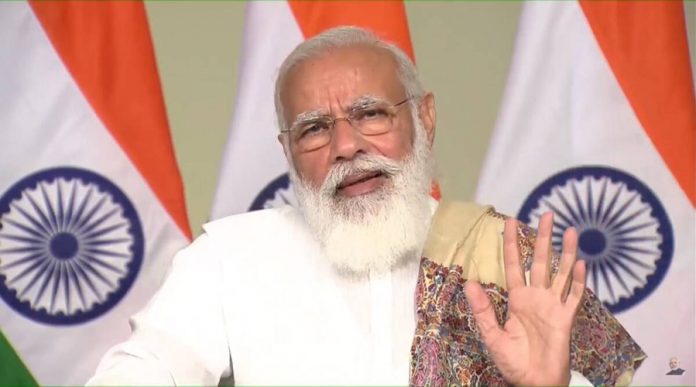 New Delhi/Riyadh: Climate change must be fought not in silos but in an integrated, comprehensive and holistic way, Prime Minister Narendra Modi said at a G20 event on Sunday and asserted that the entire world can progress faster if there is greater support of technology and finance to developing nations.

Addressing the G-20 summit side event – ‘Safeguarding the Planet: The Circular Carbon Economy Approach’, Modi said India is not only meeting its Paris Agreement targets, but also exceeding them.

Leaders of the G20, including Prime Minister Narendra Modi, on Sunday asserted that they will spare no effort to ensure affordable and equitable access to COVID-19 diagnostics, therapeutics and vaccines for all, while also pledging to use all possible policy tools to protect people’s lives, jobs and incomes in the wake of the pandemic.

“Inspired by our traditional ethos of living in harmony with the environment, and the commitment of my government, India has adopted low-carbon and climate-resilient development practices,” Modi said.

The entire world can progress faster if there is greater support of technology and finance to the developing world, the Prime Minister asserted. “For humanity to prosper, every single individual must prosper. Rather than seeing labour as a factor of production alone, the focus must be on the human dignity of every worker,” Modi said. Such an approach would be the best guarantee for safeguarding the planet, he said.

Modi said that in times of COVID-19 when everyone is focussed on saving citizens and economies from the effects of the global pandemic, it is equally important to keep focus on fighting climate change.

“Climate change must be fought not in silos but in an integrated, comprehensive and holistic way,” he said and highlighted that India is not only meeting its Paris Agreement targets, but also exceeding them.

India is a signatory to the Paris Agreement under the United Nations Framework Convention on Climate Change. The Paris accord was adopted at the UN climate conference ‘COP 21’ held in the French capital in 2015 with an aim to reduce hazardous greenhouse gas emissions.

Underlining that India has taken concrete action in many areas, Modi said the country has made LED lights popular and noted that this saves 38 million tonne of carbon dioxide emission per year.

“Smoke-free kitchens have been provided to over 80 million households through our Ujjwala Scheme. This is among the largest clean energy drives globally,” he said.

“There are efforts to eliminate single-use plastics; our forest cover is expanding; the lion and tiger population is increasing; we aim to restore 26 million hectares of degraded land by 2030; and we are encouraging a circular economy,” the Prime Minister said.

India is making next-generation infrastructure such as metro networks, waterways and more, Modi said, adding that in addition to convenience and efficiency, they will also contribute to a cleaner environment. “We will meet our goal of 175 gigawatts of renewable energy well before the target of 2022. Now, we are taking a big step ahead by seeking to achieve 450 gigawatts by 2030,” he said.

Modi also pointed out that the International Solar Alliance (ISA) is among the fastest growing international organisations, with 88 signatories. With plans to mobilise billions of dollars, train thousands of stakeholders, and promote research and development in renewable energy, ISA will contribute to reducing carbon footprint, he said.

Modi also cited the example of the Coalition for Disaster Resilient Infrastructure (CDRI), saying 18 countries, including nine from among the G20 and four international organisations, have already joined the coalition. The CDRI has started work on increasing resilience of critical infrastructure, he noted, and asserted that infra damage during natural disasters is a subject that has not got the attention it deserves. The poorer nations are especially impacted by this and, therefore, this coalition is important, Modi added.

Noting that this is the best time for further increasing research and innovation in new and sustainable technologies, Modi said it should be done with a spirit of cooperation and collaboration.