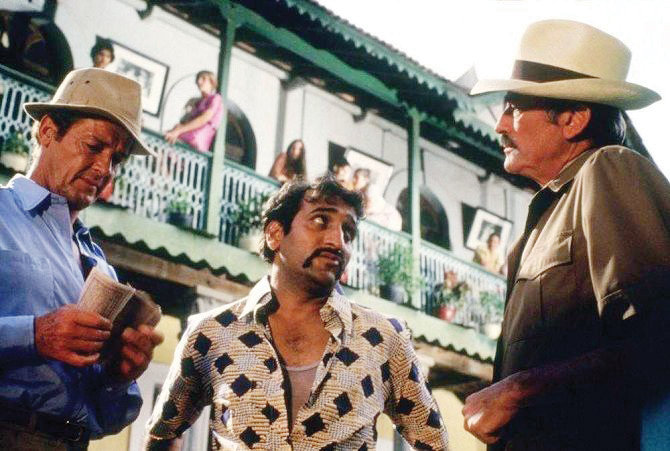 Life is filled with strange coincidences. These lockdown months have allowed me to spring-clean and to revisit a lot of the stuff lying around the house.

Exactly at the same time that I was going through the contents of a back-issue of the journal Purabilekh-Puratatva (Volume IV, Number Two, June to December 1986) published by the Directorate of Archives, Archaeology and Museum, Panaji, containing a detailed article by P P Shirodkar,’Calcutta Light Horse(CLH) Blitzkrieg in Mormugão Harbour during World War II’, someone shared a clip on a WhatsApp group of ‘The Sea Wolves’, the 1980 film about the same incident, based on the book ‘Boarding Party’ by British author James Leasor (1923-2007).

I was fourteen when the film was shot in my neighbourhood, and remember those days well. I was present during the carnival scenes (but didn’t make it into the final cut, thus nipping my celluloid career in the bud) and also watched how the stunt backward somersault of a sailor from a balcony was shot, literally, in stages. Somewhere among my memorabilia, on a torn-out page from a school-book, I have Roger Moore’s autograph as well. Many of you will have a much closer association with the making of the film.

When it was first released, the draw for us in Goa was the excitement at seeing familiar streets, homes and faces, and the film itself assumed secondary importance. This year is the fortieth anniversary of the film, and the film itself was about an incident almost forty years prior to that (1943), so there was a sort of timeline
symmetry in watching the film again after so many decades. For good measure, I also read “Boarding Party”, as I hadn’t really read it to
the end before.

I’ll probably write about the book and film in future columns, but here I wanted to discuss the film’s music soundtrack. The film composer Roy Budd (1947-1993) drew most of his material from the ‘Warsaw’ Concerto by another British film composer Richard Stewart Addinsell (1904-1977) with orchestration contributions by Roy Douglas (1907-2015). (Indeed, some go as far as saying that most of the work was written by Douglas). It was a short work (about nine-10 minutes) for piano and orchestra written for the 1941 war-time film ‘Dangerous Moonlight’ (also known as ‘Suicide Squadron’) about the Polish struggle against the 1939 invasion by Nazi Germany.

I wondered why Budd decided to ‘adapt’ Addinsell’s music instead of writing something original for ‘Sea Wolves’. One obvious possible reason could be its connection to the WWII era, in which both films are set. Both films are about war-time operations conducted under cover of moonless nights, as moonlight could literally be ‘dangerous’. Was it a silent homage to a senior composer he admired, or possibly knew? Or perhaps Budd just liked the Warsaw Concerto. Or he was on a deadline, and it was easier to adapt something rather than compose something new from scratch. I guess we’ll never know for sure.

The Warsaw Concerto was commissioned to be written ‘in the style of Sergei Rachmaninoff’’ (Rachmaninoff himself had been approached but he declined) and to represent both the struggle for Warsaw and the romance of the leading characters (Polish airman and piano virtuoso Stefan Radecki played by Anton Walbrook and American reporter Carole Peters played by Sally Gray)in the film.

Do listen to the work on YouTube; there are several good recordings. It is good faux-Rachmaninoff, although the great man would probably have written a much more intricate and lengthy work.

It isn’t to everyone’s taste, though: the British-Irish actor, comedian, writer, poet and playwright Spike Milligan called it ‘bloody awful’, but he was in a minority. It became very popular in Britain during WWII and set off a trend for similar short piano concertos in the Romantic style, nicknamed
“tabloid concertos”.

It certainly works for me. The dramatic beginning captures the anguish and angst of the Polish people, while its ravishing lyrical second theme, the tender ‘love’ theme, is the emotional core of the work.

Sadly, no matter how skillfully ‘adapted’ by Budd, the music seems an ill fit in ‘Sea Wolves’. The music makes cinematic sense in its original setting in ‘Dangerous Moonlight’. Here is a truly heart-wrenching love story which really tugs at the heart-strings.

In contrast, the contrived dalliance between Roger Moore’s Gavin Stewart and Barbara Kellerman’s Agnes Cromwell (her alias; we are never told her real German name) is tawdry and pedestrian in comparison. Cromwell is not even based on real life; there is no such femme fatale in Leasor’s book or indeed in the historical archives. She seems to be tacked on almost as an afterthought, to provide some tepid
love interest to Roger Moore, no doubt to capitalise on his Casanova/Lothario image, already off to a start with four James Bond roles under his belt at the time of shooting
‘Sea Wolves’.

Squandering Addinsell’s sweeping love theme on their damp-squib interaction is like feeding Beluga caviar to one’s pet cat. It may be well-intentioned, but it’s a waste of perfectly good caviar.

But don’t just take my word for it. Watch the film yourself to be the judge. The love theme first makes its appearance as background music in the Calcutta Light Horse foyer. It gets more intimate in the mandatory bedroom scenes, of course.

There are other references, for instance to the ‘third theme; if you like (although it could be seen also as a continuation of, or response to, the second) inserted rather incongruously as the ‘boarding party’ board the train to Cochin. But the signature dramatic beginning isn’t used at all, which seems to be missing the whole point of the work, to my mind at any rate.

What I did like was Budd’s addition of lyrics (by Leslie Bricusse) to Addinsell’s love theme, turning it into a song ‘The Precious Moments’ which is sung by Matt Monro as the credits go up. Again, they don’t quite match the jingoistic celebration of war victory that the film is all about, but the lyrics sum up my feelings of my childhood years when the film was being made in my backyard:

“They are so few, The precious moments of our lives. They fade from view, And when they do, We try to live them anew…..Treat them with care, For they are rare, And let’s be glad,
They are there.”