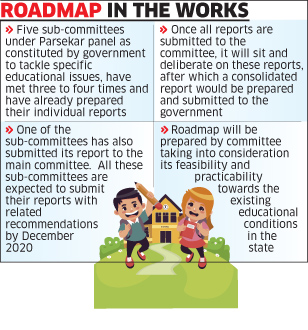 The taskforce committee set up by the government to prepare the policy and roadmap for Goa at higher education level based on the national education policy 2020 will submit its consolidated report to the government by the end of February 2021, so that the recommendations of the panel could be implemented during the academic year 2021-22.

Coming out with this information, panel chairman Laxmikant Parsekar told this daily on Saturday that the five sub-committees under his panel as constituted by the government to tackle specific educational issues, have met three to four times and have already prepared their individual reports.

“One of the sub-committees has also submitted its report to the main committee,” he added, stating that by December 2020 all these sub-committees are expected to submit their reports with related recommendations.

Parsekar said that once all reports are submitted to the committee, it will sit and deliberate on these reports, after which a consolidated report would be prepared and submitted to the government.

“The roadmap will be prepared by the committee taking into consideration its feasibility and practicability towards the existing educational conditions in the state,” said Parsekar, himself an educationist.

The government has also set up two similar committees to prepare roadmap for school education and technical education vis-à-vis the NEP 2020.

The NEP 2020 approved by the Union cabinet this year replaces the 34-year-old national policy on education framed in 1986. The new version of the policy has expanded the scope of foundational education, increasing the school-going years from three to 18, instead of the prevalent six to 14 years.

The NEP 2020 has divided education into six phases, from foundation level to doctorate studies.

The Parsekar panel is likely to suggest that at least one year of each phase should commence from the coming academic year, so that the entire policy gets implemented within the next four to five years.