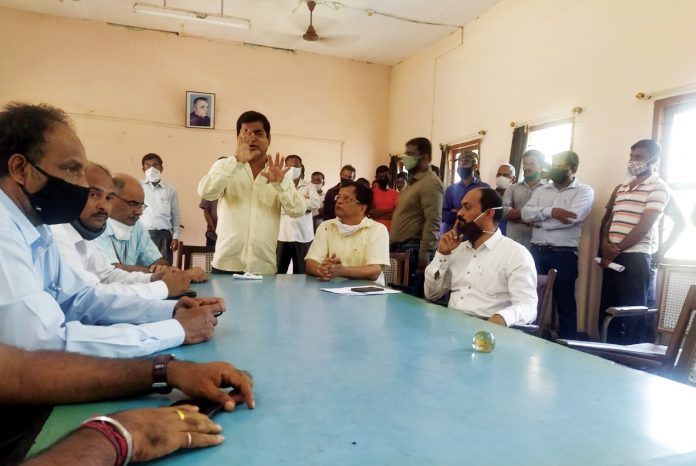 Though Agriculture Minister Chandrakant ‘Babu’ Kavlekar reiterated that the Sanjivani sugar factory won’t be shut down forever he made it clear that the factory won’t start for the season.

He also assured the farmers of paying compensation for their standing crop until the factory resumes operation. Kavlekar was interacting with the farmers during his visit to the factory
on Friday.

Kavlekar along with the chairman of Farmers’ Facilitation Committee Narendra Sawaikar and agriculture officers took stock of the situation at Sanjivani sugar factory at
Dharbandora.

It was the first visit of the Agriculture Minister following the government’s decision to bring the sugar factory under the ambit of agriculture department from the co-operative
department.

During the visit, Kavlekar inspected the entire premises of the factory, interacted with staff of the factory and also with the sugarcane farmers to take stock of various issues.

Factory workers put forth their issue of pending salary of the last few months and the minister assured to make payment of their pending salary.

While interacting with farmers, the Minister assured the sugarcane farmers that the factory won’t be shut down forever and urged them to continue with their
sugarcane cultivation.

He also made it clear that the factory won’t resume operation for this season and the government is exploring various possibilities to start the factory in a way that would benefit all.

Speaking further, the Minister assured the farmers that the government will pay them compensation for their standing crop till the factory resumes
its operation.

He also said that the farmers reserve the right to use their crop as per their needs – they can sell it to some factory or process it themselves to reap
its benefits.