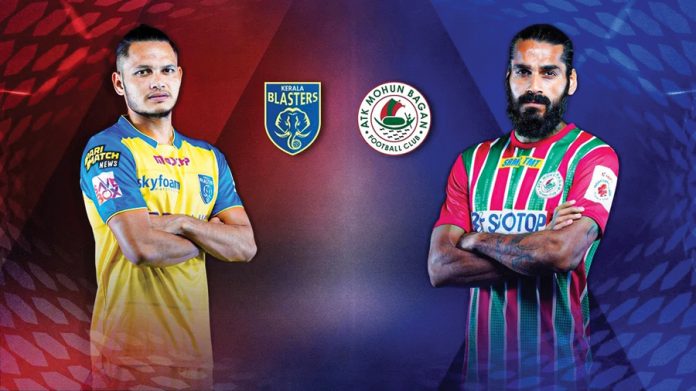 Bambolim: Behind closed doors and with a raft of health safety measures in place, football’s Indian Super League (ISL) will kick off here on Friday and become the country’s first major tournament to be organised since the enforcement of a COVID-19 lockdown eight months ago.

Former champions ATK Mohun Bagan and Kerala Blasters will start the proceedings with what is expected to be a blockbuster clash at the Athletic Stadium, here.

ATK Mohun Bagan, playing in their first tournament after the merger of last season champion sides of ISL and I-League into one club, will start as the frontrunner for the title in the seventh edition of the lucrative franchise-based tournament.

They have roped in some quality players like star India defender Sandesh Jhingan while retaining the core of last season champions ATK side such as Fijian international Roy Krishna who was on rampage against opposition defences. Roy was last season’s joint top-scorer with 15 goals from 21 matches while also providing six assists.

He was named captain in the final as ATK cruised to their third ISL title and will return as skipper alongside four other leaders of the newly-formed ATK Mohun Bagan outfit.

Chief coach Antonio Lopez Habas had recently announced that five players will be given the captain’s armband in rotation through the upcoming season. Of the five, four are members of the team that picked up the title last season with ATK.

FC Goa, who won the League Winners Shield last season to become the first side from India to qualify for the group stage of the AFC Champions League, will be hit hard by the departure of star forwards Ferran Corominas and Hugo Boumous.

Both these players established themselves as feared goal scorers in the ISL over the years.

They have also added a few quality players and their knowledge of the home conditions will come handy in their bid to at least reach the play-offs stage.

Former winners Bengaluru FC, under Carles Cuadrat, will be among the perennial favourites with an array of top Indian players and proven foreigners.

Cuadrat has ensured that his key players from their 2018-19 title-winning squad are still around.

A number of their young and talented players have also been retained, including Ashique Kuruniyan and, most importantly, the high-quality Udanta Singh.

Mumbai City FC are another side which will aim for at least a play-offs appearance after undergoing massive changes since last season.

With Abu Dhabi-based City Football Group buying a majority stake in Mumbai City FC, the club has revamped the squad in a grand manner.

The biggest name to have joined is head coach Sergio Lobera from FC Goa. Lobera led FC Goa to the final of the 2018-19 season, and was in charge for the large part of last season when the Gaurs cemented their place atop the league table.

He has brought some high quality players from FC Goa in the form of Mourtada Fall, Mandar Rao Dessai and Hugo Boumous — hero of the League with 11 goals and 10 assists in 15 matches.

The tournament, which will run from November to March, is being restricted to a single venue in view of the pandemic.

As per the protocols shared with the clubs, everyone involved with the tournament will be required to provide daily health updates through an app especially designed for this purpose.

All the teams have been staying in a bio-secure environment since their arrival in the coastal state.

The 11 competing franchises have been divided into three groups with Group A comprising four teams and Group B and C consisting of three sides each.

The ISL has also formed a central medical team and employed a League Hygiene Officer who will issue operational directives and ensure implementation of the same through the tournament.

The ISL has also mandated that the clubs hire a Hygiene Officer of their own who will be in charge of ensuring the health and safety of the players and team officials throughout the season.

ISL to be shown live across 82 territories worldwide

Mumbai: The action of ISL 7 will be telecast and live-streamed in 82 territories across the world. The league will be brought to 82 international territories through 5 partners across TV and digital platforms.

“The league has partnered with global sports broadcasters to bring the action live to millions of Indian football fans across geographies,” ISL said in an official statement.

The entire ISL 7 season, featuring 115 games amongst 11 teams, will be played in Goa behind closed doors. All the matches of India’s premier football tournament will start at 7.30 pm and will be telecast on the Star Sports Network and Disney+ Hotstar VIP.

Suryakumar, Shaw off to England

Indian archers fail to get it right in mixed pair